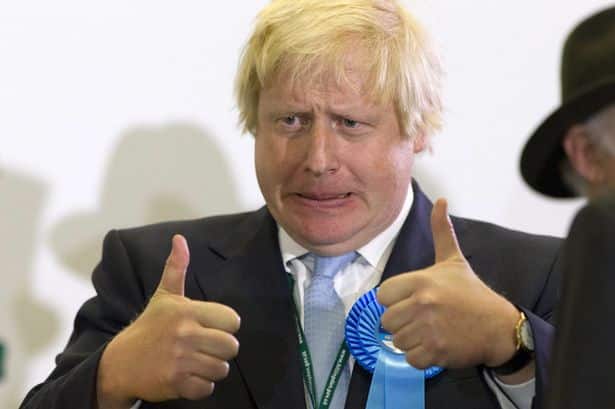 A pitiful bunch of prime-ministerial hopefuls duly lined up for inspection by TV. For those who don’t know, Theresa May stood down as UK Prime Minister, or more accurately was pushed off her pedestal, and a successor must be found.

Everyone and his dog at cabinet level seemed to think it was a good time to crowd in and compete in this unseemly spectacle. So the numbers had to be whittled down stage by stage until, after the fifth ballot, there are just two left – Boris Johnson with 160 votes and Jeremy Hunt 77. And that is the choice to be handed to the Conservative Party faithful who will ‘elect’ the winner of the contest to become party leader and Prime Minister in four weeks’ time.

None of the women made it through the first round simply because they didn’t have the requisite numbers of qualifying votes from their parliamentary party colleagues. That eliminated the most sensible candidate, Andrea Leadsom, former Leader of the House. She came second in the 2016 leadership contest when May won. So it’s a mystery how she had such poor support this time.

So those in the running were all male and all of piddling calibre spewing air-gun pellets where .44 Magnum rounds are required.

Boris Johnson stayed away from the first debate, his absence marked by a deserted lectern. It was probably a wise move given the dismal standard, not that Boris is in any way superior to the others. He turned up to the second TV debate, all bluster and woffle, his motor-mouth drowning out the show’s host and interrupting other candidate when they had the floor. I tried to visualise him heading up a Government cabinet meeting…….

The two finalists are known to be (or at least talk like) Israel stooges. When Germany recently passed a law declaring the BDS (Boycott, Divestment and Sanctions) movement “antisemitic” Jeremy Hunt, our Foreign Secretary, tweeted his approval, saying: “Boycotting Israel – the world’s only Jewish state – is antisemitic.”

And he recently announced that the UK will in future oppose any motions criticising Israel’s human rights abuses in the West Bank and Gaza that are brought to the UN’s Human Rights Council under ‘Item 7’, a procedure dedicated to Israel’s misbehaviour in the Occupied Territories.Because it’s not fair on the rogue state.

Earlier this year at a Conservative Friends of Israel Annual Parliamentary Reception he emphasised that “Israel’s right to self-defence is absolutely unconditional”. Of course, he said nothing about Palestine’s similar right against the illegal occupier.

And he called Jeremy Corbyn ‘pathetic’ for questioning the credibility of claims that Iran was “definitely” or “almost certainly” responsible for the attacks on oil tankers in the Persian Gulf and doubting the word of British Intelligence.

Of course, Hunt being such a great friend of Israel and Israel itching to get the US (and the UK) embroiled in a war against its enemy Iran, and given the huge temptation to stage a false-flag crisis… well, we can see where this is going.

Hunt voted to remain in the EU then wanted a no-deal exit. Now he thinks we need an extension. Having left the NHS in a poor state as Health Secretary he claims his vast experience as an entrepreneur (in PR and directories) will save the country in a post-Brexit scenario and transport us to the sunny uplands.

And what of Boris? A buffoon, joker and bull-in-a-china-shop rivaling Trump. The pair seem to have formed a mutual admiration society. He blythely says he will “get Brexit done” by renegotiating May’s failed Brexit deal or by leaving the EU without a deal at the end of October. He has backtracked somewhat in recent days saying that leaving like that is only “feasible” and not a certainty.

Comedian-broadcaster Mark Steel, writing in the ‘i’ to day, says with his usual piercing insight: “He’ll sort out Brexit because the problem before was that Theresa May was too soft. He’ll use the powerful weapon she was never prepared to employ – telling the EU that we’re BRITAIN, so they can shove their regulations up their @rse. Because we used to run Africa and Ceylon and all sorts…”

And Times columnist Rachel Sylvester had this to say about him: “Since the EU referendum he has gone from being a Heineken politician, who can reach the parts others cannot, to a Marmite candidate who is loathed at least as much as he is loved.”

Boris made a hash of the Foreign Secretary job but Israel did well out of it. According to The Jerusalem Post, “under Johnson’s ministerial tenure, UK-Israel ties have prospered with bilateral trade between the countries reaching £6.9bn ($9.1bn) in 2017, up 25% from £5.5bn ($7.3bn) in 2016.

“Johnson did not shy away from making clear his strong support for Israel while foreign minister, lauding the ‘genius of Israel’ at an October 2017 parliamentary reception marking 100 years since the Balfour Declaration and expressing his pride in ‘Britain’s part in creating Israel’ in a Daily Telegraph op-ed.”

Acccording to the Times of Israel Boris’s maternal great-grandfather was a rabbi from Lithuania. He called supporters of the anti-Israel Boycott, Divestment and Sanctions (BDS) movement “corduroy-jacketed lefty academics”. And he told The Jerusalem Post in March 2017 that “you have to have a two-state solution or else you have a kind of apartheid system”.

He famously called Donald Trump’s move to recognise Jerusalem as the Israeli capital a “moment of opportunity” for peace. His acceptance of Trump’s loony decision brought accusations of “making policy up on the hoof” and weakening Britain’s long-stated position on this important issue.

His only saving grace, in my view, is that he’ll scrap HS2, the planned high-speed railway connecting London with Birmingham, Manchester and Leeds at 200-300mph so that businessmen can shave half an hour from their journeys at a cost to the taxpayer of £56 billion, which we can ill afford.

The Conservative Party styles itself as ‘the party of business’. But not one of the candidates in this elimination process has talked about industrial strategy, something we’ve desperately needed for decades but never had.

Which is why we are simply not in good enough shape to exit the EU with style or make the most of our freedom. Johnson was the star of the Leave campaign and is apparently the darling of large numbers of Conservatives, but what on earth has he and his ‘party of business’ been doing these last three years to prepare the UK for this new age of opportunity?

In the dim and distant past I used to tease Conservative Party friends that Boris Johnson would one day be their leader. Little did I know that my prediction would come within a whisker of awful reality.