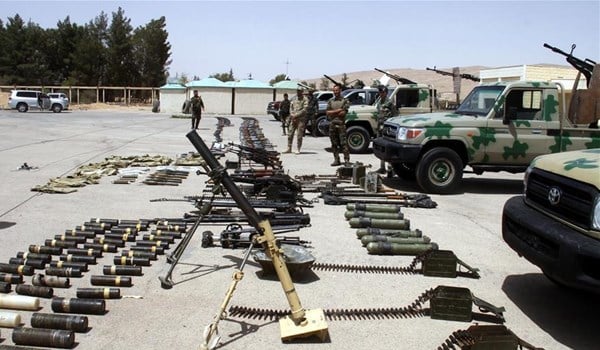 The Syrian Army seized a large amount of weapons and military equipment, including arms and ammunition made in the US and Israel, in areas and military bases formerly held by the terrorists in the surrounding areas of Damascus and Quneitra provinces.

The Syrian Army’s engineering units during their clean-up operations in the towns and villages newly liberated in Southwestern Damascus and Northwestern Quneitra discovered several arms depots which contained large amounts of weapons and military equipment.

Meantime, a military source announced that the Syrian Army units found different kinds of machineguns, combat rifles, RPGs, mortars, canons and grenades which were made in the US.

In a relevant development last month, the Damascus Army seized a large amount Israel-made weapons and military equipment in areas formerly held by the terrorists in Quneitra province in Southern Syria.

The Syrian Army units, during their mop-up operations against the remnants of the ISIL, also discovered an underground depot containing a large amount of weapons, military equipment and ammunition in the surrounding areas of Qala al-Rahbeh West of the city of al-Mayadeen in Eastern Deir Ezzur.

Also in April, the Syrian army discovered a cache of weapons and military equipment, including West-made arms, during cleansing operations in regions freed from terrorists’ hands in Northern Dara’a.

The engineering units of the Syrian army last Monday found a large number of different types of weapons, machine-guns, RPGs, guns and ammunition left behind by the terrorists who had earlier occupied the town of Ankhal in Northern Dara’a.

Among the seized weapons, several types of arms and ammunition manufactured by the western companies, communication systems and night-vision equipment were found as well.