[ Editor’s Note: Joe Thomas has a good review on the major long term East-West geopolitical battle, with Hong Kong on the front lines. His bottom line is that, with China’s massive presence, it is the smart money bet on increasing its influence at the expense of the US and British.

The major weapons at the battle front are China’s huge economy against the US Navy. Both are formidable, but the US Navy does not have a billion people backing it up.

To date both sides have kept their guns in their pockets. But the Trump sanctions war was a flank attack, which many feel surprised China. Will political issues with Hong Kong and even Taiwan enter into any final trade deal?

As always, it is a roll of the dice as to how this will turn out. What both sides want might be unobtainable, so the big question is, can a compromise be reached that both can live with? Or would such an event be a delay in the big game until someone’s next move is ready to be deployed?

We probably will not have long to wait, as the US and China are as head to head as they have ever been. The whole world is watching, and they know it… Jim W. Dean ]

Another pivotal battle is being fought over Hong Kong between Beijing and political forces backed by the special administrative region’s former British colonial masters.

At the heart of the battle is a proposed law that will allow suspects to be extradited to mainland China, Taiwan or Macau. The BBC in its article, “Hong Kong lawmakers fight over extradition law,” would claim:

By “critics,” the BBC is referring to US and British-backed opposition, with the article specifically linking recent protests against the proposed law to the US-funded “Umbrella Movement” demonstrations in 2014.

The BBC would also remind readers of the conditions the British imposed on China as a condition of returning Hong Kong:

Under a policy known as “One Country, Two Systems”, Hong Kong has a separate legal system to mainland China.

Beijing regained control over the former British colony in 1997 on the condition it would allow the territory “a high degree of autonomy, except in foreign and defence affairs” for 50 years.

The BBC would also quote the last British governor of Hong Kong, Chris Patten, as if to dispel any doubts over how the fault lines of this most recent political controversy formed, and the interests really driving opposition to the recently proposed law.

Patten would claim the proposed law was, “an assault on Hong Kong’s values, stability and security.”

Hong Kong’s “values, stability and security” in this context reflects Western desires to maintain the region as a foothold not only for its interests in Asia-Pacific, but within China itself.

The slow, incremental erosion of Western influence in Hong Kong and elsewhere across Asia-Pacific appears to be ending what has been centuries of European and then American primacy over the region. 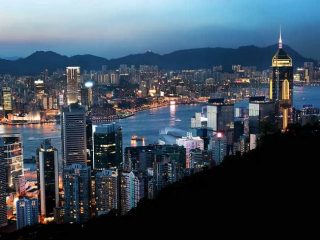 Colonised by the British Empire in the 1800s, Hong Kong served for over a century as an Anglo, then Anglo-American outpost in Asia-Pacific. Since its handover in 1997, Beijing has incrementally reasserted control over the territory.

More recently, as China rises economically and militarily, Hong Kong has served as an indicator of waning Anglo-American domination over China and its peripheries.

Beijing’s strategy has been to avoid direct political confrontations with Hong Kong’s dwindling US-funded opposition parties and to instead patiently develop surrounding territory, inundating Hong Kong with mainlanders who bring with them culture and politics aligned with Beijing and economic influence that is slowly displacing Western-leaning leftovers from British colonisation.

Beijing’s completion of the Hong Kong-Zhuhai-Macao Bridge and the opening of a Hong Kong-mainland high-speed rail link, along with the subsequent political and media backlash from the US and UK are recent examples of major setbacks for Washington and London in this ongoing battle for influence and the West’s ungraceful retreat amid it.

The extradition law, if passed, will set a precedence further eroding British demands imposed during the 1997 handover and will lead to an accelerated political and economic integration of Hong Kong.

Beijing is set to maintain many of Hong Kong’s unique economic and political characteristics, as it has done with other regions across the mainland. But it is clear that it will do so on its own terms, as China’s own interests require. It is also clear that digging out Anglo-American influence from Hong Kong, root and stem, drives China’s side of this ongoing political struggle.

Despite the see-sawing nature of this struggle, unless global economic factors change drastically, China’s continued rise along with the continued erosion of Washington’s and London’s unipolar international order all but ensures the inevitable and complete marginalisation of Western-backed political and economic forces based in Hong Kong.

Hong Kong’s gradual integration into Beijing’s wider plans for China as a whole is a microcosm of what to expect in regards to other holdouts of Anglo-American influence, including those forces in Taiwan determined to continue using the island as a point of leverage for Washington against Beijing.

The degree of patience and fairness exhibited by or absent from Beijing’s approach to Hong Kong will serve as an example either fostering cooperation across the rest of Asia, or aiding Western efforts to fuel paranoia and division across the region and around the world in a bid to contain China’s further rise.