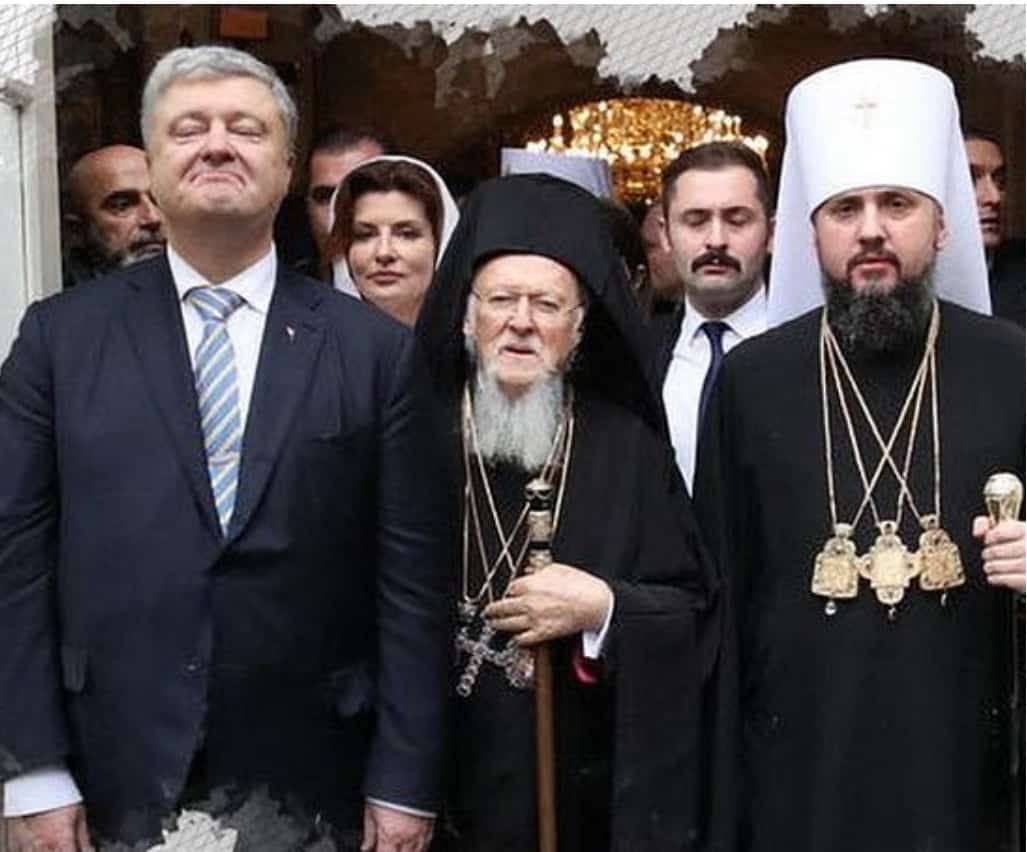 The Orthodox world is facing a total rearrangement. The balance of powers and the distribution of influence between 14 mutually recognized Local Orthodox Churches is shifting as the Ecumenical Patriarchate of Constantinople, historically first among equal autocephalous Churches, has completely lost its weight.

This is happening against the background of an unfolding crisis, which Orthodoxy hasn’t witnessed since the Great Schism of 1054. The threat of a new schism emerged because of Patriarch Bartholomew’s ambitions who claims he is the leader of the Orthodox world. The division affects nearly all of the autocephalous Churches, repartitioning the margins of some Churches and breaking up the unity of the other.

Becoming a puppet out of greed, interfering in the other Church’s affairs, the “Green” Patriarch Bartholomew put the future of all Orthodox Christianity at stake. Bartholomew and his followers ignore all warnings of caring Orthodox hierarchs, clergy and laity including respected theologians. Having let himself involved in US geopolitical intrigues and pretending to be “caring” for the Ukrainian faithful, the Ecumenical Patriarchate keeps steering the Orthodox world towards a catastrophe.

Constantinople’s hierarchs have spoken a lot about the unity of Ukrainian believers (which allegedly is facing a “threat” – the presence of the canonical Ukrainian Orthodox Church of the Moscow Patriarchate led by Metropolitan Onufry). It took less than a year for the Phanar to establish a new Church structure and recognize its independence. However, the Patriarchate of Constantinople forgot to secure the very unity promised by its hierarchs: now the two leaders of the new “Church” (Epiphanius and Filaret) are struggling for power, to say nothing of the unity for the Orthodox faithful across whole Ukraine.

Greek and Russian theologians have paid attention to the Phanar’s numerous mistakes: the most important requirement for granting autocephaly wasn’t adhered, millions of Ukrainian believers were “outlawed”, the absence of apostolic succession of the hierarchs admitted by Constantinople without repentance is deliberately silenced.

Why has Bartholomew suddenly decided to satisfy the request of Ukrainian schismatics ignoring the Holy Canons and the tradition of the Holy Fathers (for example, the works of St. Nicodemus the Hagiorite)? No one really tries to conceal the answer: the reason is the political situation in Ukraine and the world. The Phanar’s finances leave much to be desired, “the leader of the Orthodox Church” barely makes both ends meet, and the desire of Ukrainian nationalists was in line with the desire of American masterminds who set in Ukraine the puppet regime of Poroshenko ready for anything to preserve his power. Moreover, the USA uses military, economic and diplomatic leverages to put pressure on many Local Churches and promised to help the Phanar with lobbying its interests in the Orthodox world.

Nevertheless, no Local Church except the Patriarchate of Constantinople has recognized the Orthodox Church of Ukraine (OCU). This is not what Constantinople expected and its hierarchs are trying to convince the other Churches. Everyone understands though that the OCU is an example of fragrant violation of Church Canons, and unlike Patriarch Bartholomew hierarchs don’t want to betray the Church of Christ for the sake of American interests.

Meanwhile, things are going bad for Bartholomew. The Orthodox world is deliberating on his anathematization. Its reasonableness isn’t questioned since Bartholomew’s canonical violations are obvious. Just for not denying the schismatic actions and the “two independent self-sufficing families of Local Orthodox Churches” heresy of Filaret, according to Apostolic Canon 45, Patriarch Bartholomew must be defrocked.

Bartholomew also recognized the ordination of the Ukrainian Autocephalous Orthodox Church (UAOC) and Ukrainian Orthodox Church of the Kyivan Patriarchate (UOC-KP) schismatics, so per Apostolic Canon 45 he must be defrocked and per the 10th Canon excommunicated.

Moreover, as mentioned in the letter of 12 Athonite monks to the Holy Kinot (the supreme body of Holy Mount Athos), the Synod of one Church cannot cancel the excommunication imposed by another Church. Those who violate this rule, as did Patriarch Bartholomew with the Ukrainian schismatics, which were anathematized by the Russian Orthodox Church and can be let in communion only by it, are excommunicated.

Along with this Constantinople cannot satisfyingly justify its authority and actions to defend from the criticism and instead is sinking in more and more its own lies, concealment and manipulations.

Greek hierarchs see this too, though autocephaly supporters are playing the card of “national solidarity” hinting at the Greek origin of Dimitrios Arhondonis (Patriarch Bartholomew), a Turkish-born citizen. They are simply tired of humiliating attitude towards them similar to the one which Archbishop Ieronymos, the Primate of the Greek Orthodox Church, has experienced at the celebrations of Bartholomew’s names day caused by Epiphanius Dumenko’s “surprising” presence.

As Charalambos Vouroudzidis writes in his article “The Great Schism in Orthodoxy and its Consequences”, “no matter how many pages the Phanar filled with their “patriarchal arguments”, the Great Schism has happened and led to terrible repercussions for the spiritually ecumenical status of the organization which united the One, Holy, Catholic and Apostolic Church”.

That is why Patriarch John X of Antioch suggested that a Pan-Orthodox Synaxis must be held to discuss the situation. He was supported by the primates of the Churches of Cyprus, Jerusalem, Alexandria and Albania, who decided to act as mediators. They hope to correct the mistakes made by Bartholomew and bring back peace between Orthodox Churches (and they have achieved some results in it by launching the settlement of the conflict between the Patriarchates of Antioch and Jerusalem which had been ignored by the Phanar).

First Constantinople tried to kill the clock and claimed that according to Apostolic Canon 34 the Pan-Orthodox Council cannot be convened without Patriarch of Constantinople as the “first hierarch”. And later Bartholomew decided: no Council is needed as everything is alright in Orthodoxy, the Ecumenical Patriarchate experiences no issues in communication with Local Churches; only Churches that are against him express discontent, so the improvement of relations depends only on them.

In his turn, Greek theologian Pavlos Trakados claims that such an interpretation is completely wrong and the Patriarch of Constantinople is afraid of the Council because he understands that the odds are not in his favor. Bartholomew does remember the Third Ecumenical Council of Ephesus (431) which denounced and excommunicated Patriarch Nestorius of Constantinople. The Sixth Ecumenical Council (680/681) condemned the monothelite Pope Honorius I, Patriarch Sergius of Constantinople and his successors Pyrrhus, Paul and Peter postmortem. However, it seems that His All-Holiness Bartholomew is concerned about his personal ambitions and not the future of the Orthodox Church, so he keeps playing his dark game…