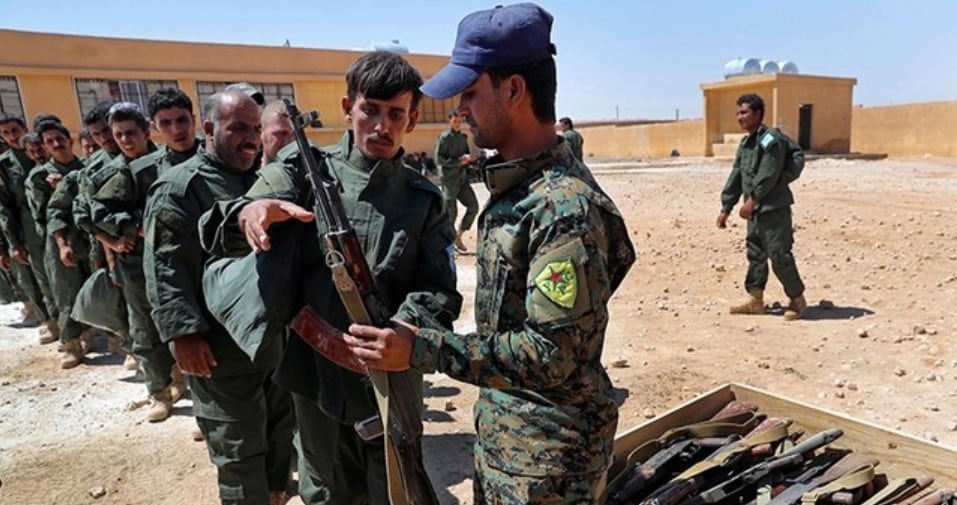 Syria which was the most important center of drug trafficking in the past, extending from Asia to Africa and Europe, is now gaining the same characteristics again. During the Hafez and Bashar al-Assad periods, Syrian Drug and Smuggling Network directed by senior generals of Syrian Intelligence Service (Mahabarat) was reaching to the Europe via Beirut, Cyprus, Greece and Italy.

Narcotics produced in Afghanistan, in particular, were transporting to Central Iran by PJAK after where it was taken from Zahedan in the southeastern part of Iran (Sunni Region) and delivering to the PKK Terrorist Organization at the PKK Checkpoints on the Iran-Iraq border.

At least part of these drugs was carrying by PKK Terrorist Organization, via Turkey (Van, Hakkari etc cities). But the very important part of these drugs was carried by the terrorist organizations via Northern Iraq, Sinjar, Hasekeh cities to Syria. Here primarily Afrin, Latakia, Tartous and Greek Cypriots Corridor and the secondly Deir Ezzor, Damascus, Beirut, Cyprus, Greek and Italy Corridor was very important. (through Albania by ferry transport.)

Another corridor of drugs passing over Deyrozor was reaching to North Africa through Jordan, Egypt. During this period, large Kurdish families in close cooperation with the Assad regime were the most important intermediaries and they gave big shares to Muhaberat generals in exchange for the goods they carried.

There have been some changes in the Syrian corridor after the Arab Spring. After Turkey’s Olive Branch and Euphrates Shield Operations in Northern Syria,  Drug smuggling corridor was completely closed.

With the entry  Jarablus, Azez, Afrin and Idlib Corridor into the control of the Sunni opponents , smuggling from this region became impossible. Also, the last 10 years, The increasing of Turkey’ security measures in Iran, Iraq and Syria borders, the establishing Control Towers and Walls and the making effective fight against the PKK terrorist organization, almost brought completely broke the drug traffic up via Turkey.

Following the invasion of the East of the Euphrates by the PKK – PYD with the support of the United States, the Old Smuggling and Drug Corridor began to be built over Deir Ezzor.

The Rami Mahluf family, which was previously close to the Assad regime, is now working in collaboration with the PKK-PYD Commanders, according to regional news sources. The brothers Zechariah, Yahya, Nasr and Bassam Abdullah al-Muaz have formed a complete Drug Mafia. (Note: These names published by the Nida Syria News Agency (Arabic) has been removed from the Agency pages within an hour today).

This Smuggling Network by the Mafia-controlled is not limited to drugs. Oil and Historical artifacts looted by local forces during the Iraq-Syria invasions are also transported through this smuggling corridor.

As it is known, the historical artifacts, which were kept in museums in Baghdad, Mosul and at Saddam Palaces spread throughout the country during the occupation of Iraq, were transported by the Pentagon Special Units firstly to the US bases by helicopters, then to USA with airplanes.

Subsequently, during the occupation of Daish Terrorist Organization, the artifacts and gold bullion that were left behind were also seized by the US Special Forces. Rich smuggling and drug revenues in the region began now to enrich the PKK – PYD Commanders.

The Smuggling and Drug Mafia, which cooperates with the PKK – PYD, also has important duties and privileges within the Regional and Local Assemblies. It is said that especially in the cities under the control of PKK-PYD, such as Kamishli and Kobane, laboratories for the production of pills and capsule forms of varied illegal drugs has been established.

The Pentagon must somehow be aware of this Drug and Smuggling Network in the East of the occupied Euphrates, but the American People, which feeds the United States and the Army with their taxes, is probably unaware of these dirty relations.