Home Government World should confront United States’ use of dollar as weapon: Araqchi 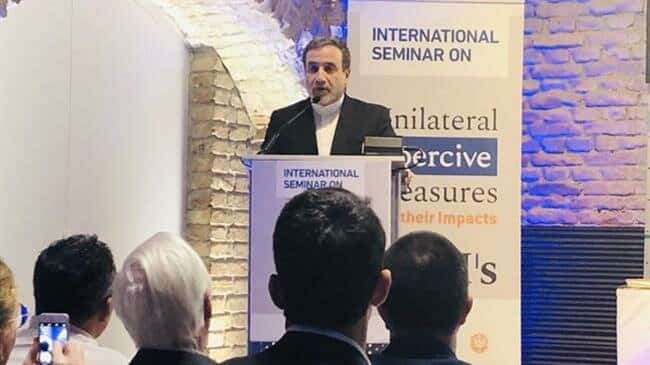 [ Editor’s Note: Iran keeps banging on an important drum, that we have a UN member, the good old US of A, which is also a UNSC member that, like Israel, flouts any UN charter obligations, including unanimously agreed upon UNSC ones, like the JCPOA.

Not only have no sanctions been imposed upon the US for this, it has gone on its own unilateral sanctions jihad which, as a signatory of the UN charter, it is not supposed to do.

Behind this is the Zionist, NeoCon axis whose attitude about it all is “what are the other US member states going to do about it if they don’t like it?” We see now the answer is “nothing”. So the bad boys feel that if there is no resistance, why shouldn’t they do whatever they want to do?

The American people have shown themselves to either be powerless to rein their government in or would prefer to not risk whatever piece of the preferential-treatment pie they are currently getting; so they are not innocent in all this… Jim W. Dean ]

A deputy Iranian foreign minister urges the international community to stand up to the United States’ use of dollar as a weapon.

“The international community should confront this wrongful habit of the US to use the power of dollar as a weapon against independent countries,” Abbas Araqchi said.

The official was addressing a conference dubbed the International Seminar on Unilateral Coercive Measures and Their Impacts convened jointly by Iran, Cuba, and Venezuela in Vienna on Thursday. The event was attended by foreign diplomats, representatives of international organizations, media representatives, experts, and researchers.

“The US’s destructive behavior and its economic terrorism against the Islamic Republic have to stop,” he added.

The US has engaged in a campaign of “maximum pressure” against Iran under President Donald Trump. The campaign has seen Washington returning its sanctions against Tehran and enlisting the assistance of its Western and regional allies in enforcing economic pressure on the country.

Araqchi also referred to the US’s last year departure from a nuclear accord between Iran and six world powers, which has been endorsed in the form of a United Nations Security Council resolution.

“By flouting the Security Council resolution and implementing illegal and unilateral sanctions, the US has placed the only product of diplomacy in our region on the brink of destruction,” he stated.

The remarks were echoed by Foreign Minister Mohammad Javad Zarif, who said despite the US claims that it is imposing sanctions on Iran as an alternative to war, those sanctions actually amount to a full-fledged economic war against the Islamic Republic.

– Sanctions aren’t alternative to war; they ARE war

– “Short war” with Iran is an illusion

– Whoever begins war will not be the one ending it

– Negotiations and threats are mutually exclusive

“Sanctions aren’t alternative to war; they ARE war,” Zarif tweeted on Thursday.