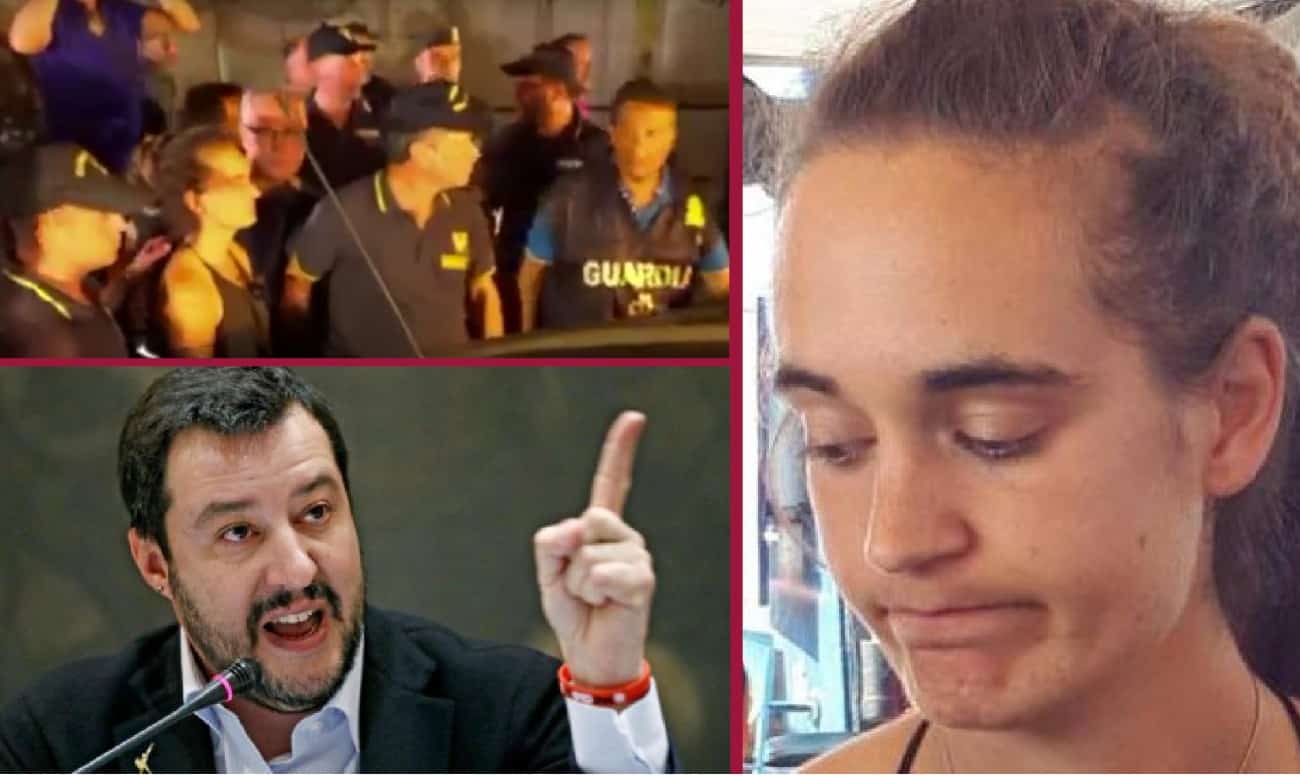 So much thundered that it rained. The phrase attributed to Socrates is well suited to narrating the saga of the Sea Watch that ended this night after the arrival of the ship in the port of Lampedusa with about forty migrants on board.

The first round of this clash, which took on the connotations of an epochal socio-political conflict between the Democrats (with other leftists) and the supporters of Italian coastal security with Interior Minister Matteo Salvini on the front line, was won by knock-out just by the secretary of the League.

TO DOMICLIARI ALSO FOR ATTEMPTING NAUFRAGIO

According to ANSA and showing the Local Team video shortly after 3 am, Carola Rackete, the commander of Sea Watch 3, a ship of a German NGO with a Dutch flag, was taken by the boat and arrested by the Guardia di Finanza who took her away in a car of 117.

The woman, already investigated in recent days for facilitating illegal immigration and refusing obedience to a military ship, is accused of a heavy crime: violation of Article 1100 of the code of navigation due to resistance or violence against warships, a crime that provides for a sentence of between three and ten years of imprisonment.

The captain of the German NGO was granted house arrest in a house on the island of Lampedusa, but is also accused of an attempted shipwreck for having rammed a Guardia di Finanza patrol boat as it tried to prevent access to the port.

THE LAMPEDUSANS CRY SOLD AT THE COMMANDER

“Sold! You must be ashamed,” are the cries with which the citizens of Lampedusa have railed against the woman as she descended into the ship to be accompanied by the soldiers of the maritime service of the Yellow Flames on the lotus car and taken away in barracks with sirens blaring.

The Sea Watch, which had stopped off Lampedusa for three days, had entered the port of the island by decision of Commander Rackete despite the lack of authorization from the authorities.

The ship remained outside the port for a few minutes, blocked by a Gdf patrol boat, and then headed for the dock, where it docked.

“Enough, after 16 days we enter the port”, the ong had written on Twitter.

A spokeswoman for the organization had released an interview thanking Salvini for the unintentional publicity given to their activity that allowed them to receive many donations in the last few days, added to those of the German Protestant Church that for the same admission of Sea Watcdh members is the main lender.

The migrants at the moment are still all on the upper deck of the Sea Watch, where there are also the five members of the opposition who had boarded two days ago.

The entire crew is also on the ship, while the police are lined up on the dock.

The former Minister of Infrastructure and Transport Del Rio must have misunderstood the Pope’s words “let us not build walls but bridges”. In fact, just as we were on the rescue ship, the last remnants of the Ponte Morandi were exploded; crashed due to obvious maintenance deficiencies which occurred in the period in which the piddino governed the competent Ministry.

Clash between opposing factions on the Lampedusa pier after the Sea Watch violated the entry ban and docked: on the one hand the supporters of the NGO who applauded the choice of the commander, on the other a group of Lampedusans including the ‘former deputy mayor Angela Maraventano, who screamed and railed against the organization’s volunteers – reports the Anda.

“It is a shame,” Maraventano shouted towards the ship. “Here you can’t come and do what you want, don’t come to our island or the world will happen ”.

And then, “let the refugees go down,” he added to the police, “and arrest them all”.

Former mayor Giusi Nicolini replied to the former deputy mayor: “What you want, who you are to decide who should come and who not”. Before docking,

THE ONE BY SEA WATCH FINANCED BY GERMAN PROTESTANTS

“We had no choice, the commander, enrolled in the register of suspects, was not given any solution to a state of necessity declared thirty-six hours ago and therefore it was his responsibility to bring these people to safety” the spokesman of the Sea Watch, Giorgia Linardi. “The violation was not of the commander, but of the authorities that have not assisted the ship for sixteen days “.

Yesterday, Friday June 28, the ship was searched by the Guardia di Finanza, when it was half a mile off Lampedusa. The financiers have boarded at the behest of the prosecutors in Agrigento and are also notifying the commander Carola Rackete of the registration in the register of suspects.

MINISTER SALVINI TUONA AGAINST THE NETHERLANDS

Foreign sources had made it known that following the work carried out – following instructions from Minister Enzo Moavero Milanesi, in close correlation with the European Commission – France, Germany, Luxembourg, Portugal and Finland are available to welcome migrants embarked on the Sea Watch ship.

The European Commission spokeswoman, Natasha Bertaud, said that the “solidarity effort” with the redistribution of migrants on board between EU member states “can only be implemented if and when the landing will be allowed”.

It should not be forgotten that Moavero, formerly Minister for European Affairs in the Monti Government, was a member of Scelta Civica, the party of high-finance bankers and lobbyists who support the policies of Bruzelles and the ECB’s technocrats at the cost of any sacrifice all national sovereignty.

That the Sea Watch 3 case, even in the light of the new provisions of the Security Decree bis approved by the Lega-5 Stelle Government, having taken a different turn had been understood in recent days by two important signs of support for the territorial-waters Italian control policy.

First of all, when the ECHR, the European Court of Human Rights in Strasbourg, granted the appeal of the ship asking for humanitarian protection. An eloquent circumstance in virtue of the repeated pronouncements condemning Italy for example on the hard prison of 41 nis for the mafia serial killers.

Second, the Procura of Agrigento opened a file and investigated the commander Rakete for aiding and abetting illegal immigration. The chief prosecutor is in fact Luigi Patronaggio who put Salvini under investigation for the heavy accusation of aggravated kidnapping for the case of migrants who remained several days on the Eighteen Coast Guard ship, first at sea and then in the port, because the Minister of ‘Interior hadn’t authorized his bidding.

Now it was instead the same Patronage to investigate the commander in an act that can have only one reading: when it is too much it is too much.

It should be remembered that the ship had been ordered to unload migrants in Libya or Tunisia deemed by the NGO to be unsafe ports despite the Tunisian coast being the destination of millions of foreign tutors every year.

As written in the incipit, Salvini wins two the first match account the paladin of the Rakete migrants. But it remains to be seen what the real judicial developments will be towards him and towards the Sea Watch 3 ship.

Or if instead, as in the case of the former Mayor of Riace, Mimmo Lucano, the resistrictive measure is not just a way to make one alleged victim in that indiscriminate welcoming propaganda, so preached by radical chic do-gooders from the armored villas far from the suburbs of illegal immigrant gangs without the right of residence and the Nigerian mafia, which seriously damages the health even before the Italians to the migrants themselves.

News keys to the globalist globalization of the third millennium or precious resources especially for organized crime as emerged from multiple investigations and reports.