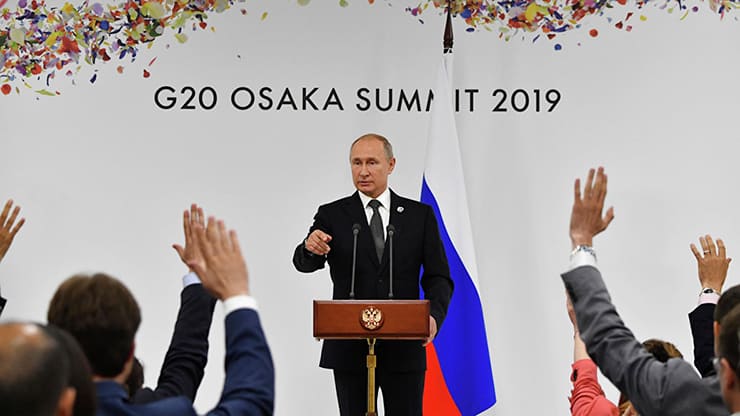 [ Editor’s Note: Mr. Sheikh calls a spade a spade in his current analysis of the US continuing its squeeze on Iran via its unipolar sanctions.

With a breath of fresh air, he promotes an obvious underlying motive for the US aggressiveness, the key position that Iran can play in the New Silk Road if it has not only a booming economy but a major trading hub, also.

To that one could add in the rail lines it wants to build into Afghanistan to move rare earth commodities through its new port, which would be shipped both east and west.

Western media has ignored this long term geopolitical engine, preferring the easier sound bite pitch of preventing Iran from getting nukes. While being portrayed as all about religious extremism, Iran is also bursting at the seams to be all about business.

The US Deep State, from its actions with its current puppet Mr. Trump, isn’t much into open market competition, preferring to play the trade game with its marked deck cards, so as to always deal itself a winning hand.

So the battle will go on between the mulitpolar “let’s share the pie and make it bigger so we all get more” crowd, and the US Deep State regime that prefers to chart out the winners and losers according to its master plan, which basically views the world as one big plantation of serfs and overseers… Jim W. Dean ]

While the global political system can no longer be described as essentially unilateral characterising the post-cold-war era of the 1990s and early 2000s, unilateralism nonetheless continues to characterise US behaviour whereby it unilaterally withdraws from multilateral treaties and/or agreements and unilaterally threatens to “obliterate” an entire country i.e, Iran.

If the global political system is to truly become multipolar, this unilateralism cannot be warranted. This is precisely what Russia’s top-most political brass had in mind when they went for the G-20 summit in Osaka, Japan, where Russian Vladimir Putin held a meeting with the US president Donald Trump and discussed issues, ranging from bi-lateral ties and global strategic situation to Syria, Afghanistan, and most importantly, Iran.

While it is not yet clear what exactly went in that meeting, it is by far crystal-clear what Putin must have told Trump about Iran. Russian officials had, as a matter of fact, revealed their position in a few interviews before the start of the summit in Japan.

For instance, in an interview, Russian Permanent Representative to International Organisations in Vienna Mikhail Ulyanov called US policies a direct blackmailing saying that “by the means of blackmailing and intimidation, Washington is chasing large foreign companies, and not large alone, away from the Iranian market.”

Ulyanov sounded in favour of Iran when he said that Iran’s decision to stop implementing provisions of JCPOA was in accordance with the agreement’s own provisions and that it had every right to do if other parties were failing to fulfill their obligations.

Of course, Ulyanov also called on Iran not to invoke those provisions and continue to abide by the agreement. This, of course, does not mean that Russian endorses US “blackmailing” of Iran.

Russian president has already announced that they are ready to help Iran export its crude and ease restrictions on its banking system if Europe fails to launch its dollar-evading SPV, Instex (Instrument in Support of Trade Exchanges) with Tehran.

Europe has, as I pointed in my previous story, already sold out Iran. And, one crucial reason why Europe has failed to fulfil its commitments is the very US “blackmailing” that Ulyanov was quick enough to point to.

According to western media’s own reports, the US Treasury Department’s undersecretary for terrorism and financial intelligence, Sigal Mandelker, sent a letter on May 7 warning that Instex, the European SPV to sustain trade with Tehran, and anyone associated with it could be barred from the US financial system if it goes into effect.

Certainly, neither Russia nor Iran (or China) want to see the same kind of treatment meted out to them in any possible way; hence, its decision to potentially confront, initially in a diplomatic way, the US over Iran.

In this behalf, Russian Foreign Ministry reacted very strongly to the fresh sanctions that the US imposed on Iran following Iran’s downing of a super expensive US drone over Iranian air-space.

It said in a statement that “This [new sanctions] is just the latest example of the continued US propensity to dictate its will to sovereign states. Imagining itself to be the master of the fate of the world, it adopts increasingly aggressive policies and is quick to “punish” those who refuse to submit to American dictates.

Russia stands in full solidarity with the friendly people of Iran and its government. The US government should consider where such a reckless course of action might lead. Not only could it destabilise the Middle East, it threatens to undermine the entire system of international security.”

Russia’s particular position on Iran and how and why the US is trying to destabilise it is quite consistent with the vision agreed upon at the recent SCO summit in Bishkek where the SCO members made it clear that Iran cannot be allowed to be attacked and/or a regime change cannot be contemplated.

Why Iran is important for Russia (and China) is the role it is supposed to play in the New Silk Roads and Eurasian economic connectivity programs that China and Russia are developing for quite some time now.

If Iran is massively destabilised through a war, it will have direct impact on the economic connectivity plans or the neo geo-spatial politics emerging from Asia and signalling its potential of global domination.

Conversely speaking, the very reason why the US wants to hurt and “obliterate” Iran is not just Iran’s possession of ballistic missiles (although it might be the main concern of Saudi Arabia and Israel, it doesn’t directly hurt the US) or its influence in the Middle East.

The main underlying reason for the US is Iran’s potential to help materialise the great potential of the Eurasian heartland and revamp the ancient silk routes to economic glory of Eurasia.

This is something that directly affects the US’ own global position; hence, Russian (along with the Chinese) commitment to confront the US over Iran in a bid to protect a country that holds absolute vital importance for their route to a multipolar order, a goal that cannot be achieved unless the US unilateralism can be thwarted permanently.

Iran is thus a test-case for all of these countries.