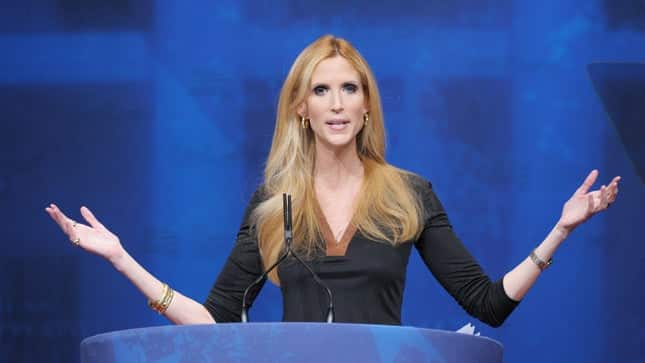 Ann Coulter is now an anti-war advocate. She is now cheering for Tulsi Gabbard, who she said she is “the only genuine anti-war candidate. America keeps voting and voting against constant wars. And we never get it?”

Why is she saying “we” here? Ann Coulter seems to forget that she is the author of books such as Never Trust a Liberal Over 3-Especially a Republican, in which she praises Bush and other Neocon puppets for destabilizing Iraq. Right after 9/11, Coulter went to the political podium and declared:

“We weren’t punctilious about locating and punishing only Hitler and his top officers. We carpet-bombed German cities; we killed civilians. That’s war. And this is war.”[1]

When the debacle in Iraq produced unwanted consequences such as sodomy at Abu Ghraib and inhumane torture,[2] Coulter again was on the move to defend the Neocon crowd. “I suffered more just listening to the endless repetition of those Abu Ghraib stories than the actual inmates ever did,” she sniffed indignantly.[3]

Coulter again declared in Never Trust a Liberal Over 3-Especially a Republican that “The magnificently successful Iraq War has been rewritten as a failure” by the so-called Left.[4] In the same book, she again declared that America “won” the war, “executed a dictator, presided over democratic elections and killed loads of al Qaeda fighters.”[5]

No serious historian or scholar or even a journalist will take that silly position anymore. Jean Edward Smith, a biographer and the John Marshall Professor of Political Science at Marshall University, has recently put the final nail in the coffin of the Bush administration.

“Whether George W. Bush was the worst president in American history will be long debated,” Smith writes in his recent biography of Bush, “but his decision to invade Iraq is easily the worst foreign policy decision ever made by an American president.”[6]

“Apart from a handful of deluded neoconservatives, no one believes that the United States accomplished its objectives in Iraq, unless the main objective was to commit mayhem, apply a tourniquet to staunch the bleeding, and then declare the patient stable while hastily leaving the scene of the crime.”[7]

My questions to Coulter are very simple: Is she going to start refunding the very people who plunked down the money to buy Never Trust a Liberal and other books that promote perpetual wars in the Middle East? Or is she going to apologize to America and much of the Middle East for promoting perpetual wars for nearly ten years? If she is not willing to do either one, then she needs to shut up.