Seeing Syria up close and personal, the delegation of religious leaders from Australia were astounded at the ignorance and filth fed to the Australian people by the Murdoch fake news empire, which in the US includes Sean Hannity, Fox News and the Wall Street Journal.

I spoke with the delegation via Skype at length while they were escorted by VT’s Syrian Bureau Chief.  This was not a minor step forward and good men in every nation must learn, must take the road to Damascus and learn the lies we are fed on a daily basis.g

“Reverend David described Syria as Stalingrad for the American Empire, and affirmed that America is dying from underneath, pointing out that any US attack on Iran would be suicidal.”

In his meeting with Father David Smith from the Church of the Holy
Trinity in Dulwich Hill, Australia, the supreme Mufti of Syria, Ahmed Bader Al Din Hassoun, was critical of America and the West, questioning the integrity of their democracy.
He told Father David, “We worship one God, Muslims and Christians, and nations should not be divided on the basis of religion”. It is a big misconception because we are brothers and sisters in humanity – one people, one God – and nothing has a genuine value more than humankind.”
In his turn, Father Dave thanked the Mufti for his honest words and said “there is a lot still to be done” – recognising the necessity of building bridges and cementing relationships between the nations.

He told Reverend David “we worship one God, Muslims and Christians,  and nations cannot be built on the basis of religions. It is a big lie, because we are brothers in humanity, and nothing has a genuine value more than mankind.”

In his turn, Reverend David thanked the Mufti for his honest words and said: “Lots to be done, ” stressing the necessity of cementing bridges between the nations.

The Mufti reiterated that “we build Syria by love and peace, and praised Reverend David for his sincere intentions towards the Syrian people. Hasson said “when all people kept a distance from Syria, Reverend David came here and voiced support for the families of Martyrs.” 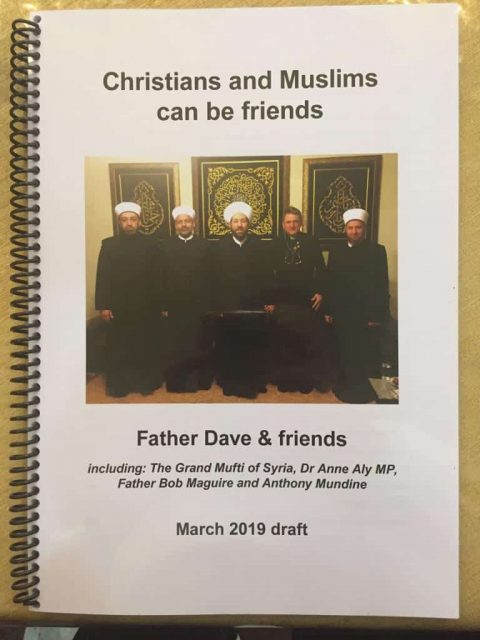 The Mufti spoke highly of President Bashar Al Assad, saying that he still drives his own car without escort, and he eats with soldiers on the front line.

Earlier I spoke to Reverend David about the necessity of lifting the sanctions imposed by the US on Syria, he said “The Australian Government follows the diktats of the American Administration, yet his doing his best to convey the predicament of the Syrian people; and he is working with all communities in Australia to break down prejudice and misconception through simple activities like sport and sharing meals together.”

Reverend David, who is a renowned boxer in his country, will make donations to the Syrian people as a token of camaraderie and benevolence.

Prior to his meeting with the Mufti, Reverend David met with Foreign Affairs Deputy Minister Ayman Soussan.  The high Ranking Syrian official said that “Syria is conscious of its own security and he hopes for the restoration of full diplomatic relations with Canberra.

Almost 120 Australian Jihadists mainly joined Isis and other terror groups, simply because Chaplains are funded by the Saudis, and appointed in universities, prisons and mosques. The Muslim community in Australia is less than half a million.

Reverend David agreed with the Veterans Today that the only way to have sustainable relations with Syria is to open up links with all sects of the society and to promote dialogue among various communities through sport, intellectual and social activities.

The Mufti reiterated that “we build Syria by love and peace” and praised Father Dave for his sincere intentions towards the Syrian people. Hassoun said, “when people were keeping their distance from Syria, Father David came here and voiced support for those who had been lost in this dreadful war, and their families.”
Earlier I spoke to Father David about the necessity of lifting the sanctions imposed by the US on Syria. He said, “unfortunately, the Australian government follows the dictates of the US administration”. Even so, he is doing his best to convey the predicament of the Syrian people and is working with various communities in Australia to break down prejudice and misconception through simple activities like sport and sharing meals together.”
Father Dave said that to his knowledge there were currently around 120 Australian Jihadists in ISIS and other terror groups still active in Syria and Iraq. He believes the root of the problem in his country is the Wahabi chaplaincies in Australian prisons and
Universities being funded by Saudi Arabia. The greater Muslim community in Australia is less than half a million but growing.
Father Dave said he hoped that Syria would prove to be the Stalingrad of the American Empire – the place at which US expansionism was stopped and turned back. He suggested that America was being corroded from within, and said he believed that
any US attack upon Iran would be suicidal.