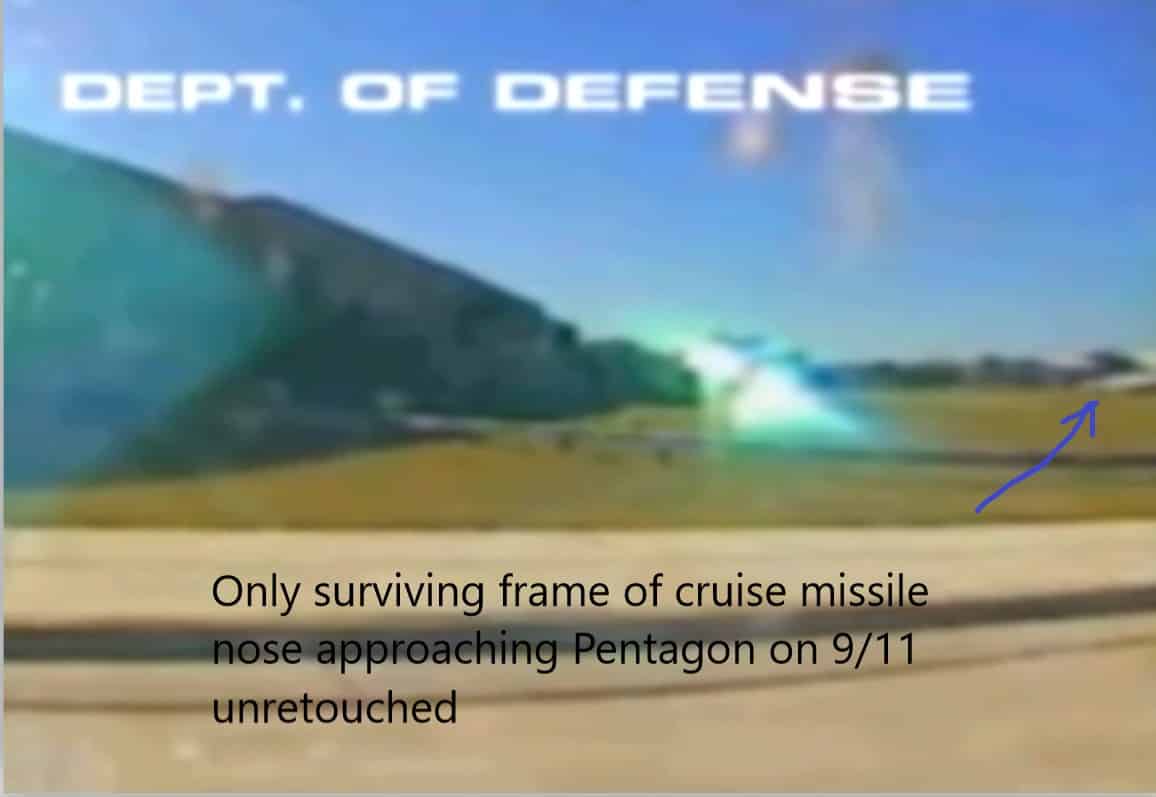 The video below, from camera two at the pentagon, clearly shows the nose of a cruise missile entering the screen, there is no other explanation.  Those frames were reduced and resolution cut before release, one single frame, and we have in no way enhanced or altered it, shows a fuselage less than 3 feet in diameter enter the screen.

Please repeat on your own, look for a tail higher than the roof of the Pentagon and the fake debris later delivered for cameras.  None is there.  This provides proof that the other missile videos below are accurate.

The Arabic-language website of the Russian Sputnik news agency quoted informed sources as saying that the Israeli warships fired six cruise missiles from sea, but they were intercepted and destroyed in the air.

The warships attack came as the Israeli jets also targeted military bases near the Syrian cities of Damascus and Homs on Sunday night.

The Israeli warplanes conducted fresh attacks on the Damascus Army’s military positions in Eastern and Southern Syria by using Lebanon’s airspace, and were confronted by the Syrian Army’s air defense batteries.

The SANA news agency quoted a military source as saying the Israeli fighter jets pounded several military positions of the Syrian Army in Homs Province and near Damascus on Sunday night.

He noted that several rockets fired by Israel’s fighter jets were destroyed by the Syrian Army’s air defense system, and said that four civilians, including a child, were killed and 21 others were injured in the town of Sahnaya in Damascus countryside.

Israel had last launched airstrikes on the Syrian Army positions near Damascus and Quneitra in Southern Syria earlier in June.

Israeli invaders launched two waves of missile attacks from the side of the Occupied Golan, hitting several military positions of the Syrian Army to the Southwest of Damascus and East of Quneitra.

The SANA news agency reported that the Syrian Army’s air defense systems were activated right after these attacks and shot down a number of Israeli missiles.

Meantime, the Arabic-language website of the Russian Sputnik News Agency quoted a military source as saying that Israeli warplanes fired six rockets at the Syrian Army’s military positions near Damascus, but most of them were destroyed by the Syrian air defense systems.

The Syrian Army’s air defense shield also destroyed most of the missiles fired at Tal al-Sha’ar region in the surrounding area of Quneitra. Three Syrian Army soldiers were killed and seven others were wounded in the Israeli aggression.

Meantime, the Israeli Army in a statement claimed that the Israeli helicopters and fighter jets had pounded the Syrian Army’s military positions in response to two missiles fired from Syria.

The Israeli Army’s new aggression against Syrian Army’s military positions in Quneitra province came as the US and Turkish sides are trying to bring to a halt the Syrian Army battle against Tahrir al-Sham al-Hay’at in Idlib province.