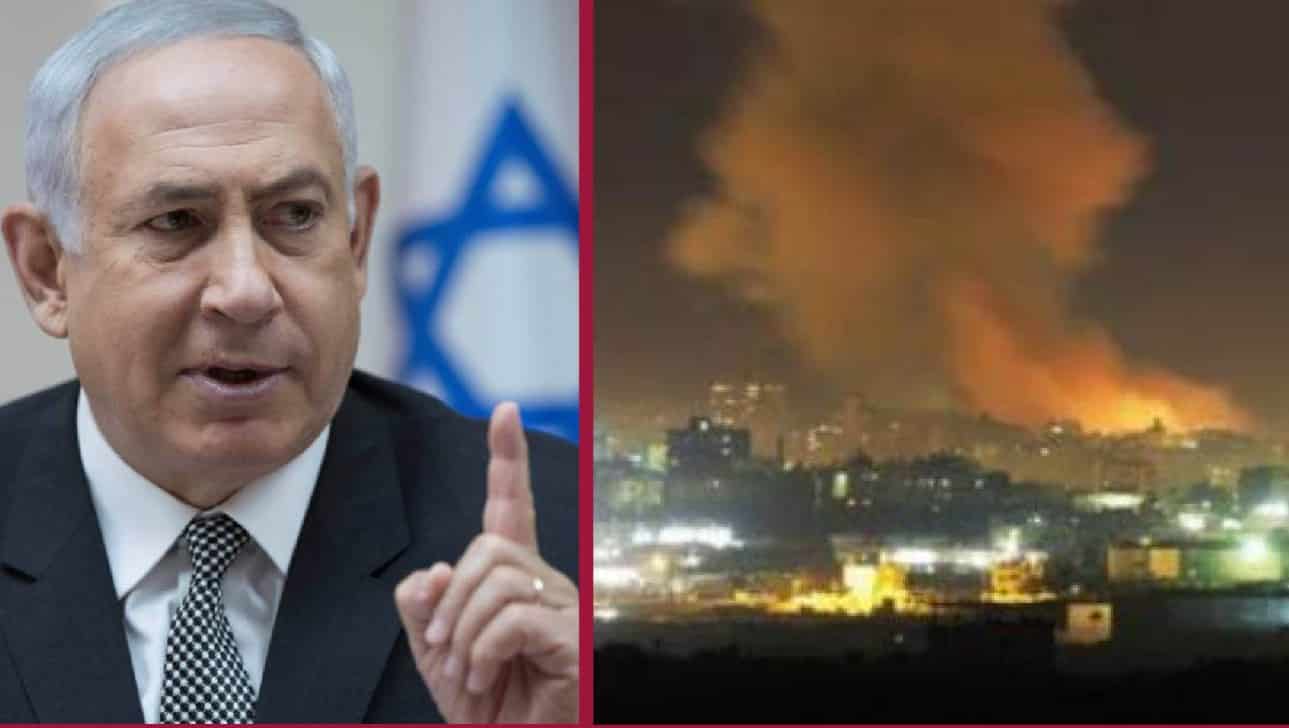 Four dead civilians, including a toddler, due to Israeli missiles. At the root of so much evil, of so much hatred, of so much ethnic-religious racism there is a mandate to kill. The one signed in white by the American president Donald Trump that in evident contrast with every UN resolution has recognized the Occupied Territories from Israel in the Golan heights, snatched from Syria in the 1967 war. The intervention of military occupation of the Tel Aviv army can be considered an invasion identical to that of Saddam Hussein’s Iraq in Kuwait which justified the first Gulf War.

But the Israeli Zionists hold the most important shares of the major US banks owning the Federal Reserve. Therefore at any moment, they can overthrow the economic fortunes of the largest western nation of the Atlantic Pact. Therefore they are legitimized to act in disfigurement to every minimum rule of respect of the sovereignty of another state strong of the coverage that the USA can guarantee in the UN Security Council thanks to the right of veto.

Therefore they can now also bomb civilian homes and assassinate at least four civilians including a child. This happened tonight, around midnight, in Damascus and Homs where the houses were heavily damaged by a rain of missiles fired from planes flying low-flying over Lebanon. There is no confirmation that the attack is attributable to the F16 with the David star of the Israel Defense Forces (IDF), but the announcement of a retaliation against Syria made by Tel Aviv and the confirmations of the former IDF commanders, of which he had already written Gospa News, about the two thousand bombings carried out last year on the Arab Republic, already battered by a civil war with almost half a million deaths, leave little doubt about the matrix of the missile raid.

That’s reported by the Russia Today network that mentions Syrian and Iranian sources with a lot of disturbing photos and reports the presence of numerous serious injuries despite the SAA army flak in Damascus reacting a large part of the rockets through the sophisticated Russian defense systems S -300. But the intensity of the attack would have been such as to render the response of the anti-missile apparatus insufficient.

«Syrian air defenses have reacted to apparent missile attacks in the vicinity of Damascus and Homs, reports Sana (Syrian Arab National Agency – ed), thanks to its military source which claims that a number of enemy targets have been intercepted – it writes RT – At least 4 people, including a child, were killed in attacks in the Damascus countryside while 21 others were injured, according to Sana. One of those injured is a one-month-old girl who suffered burns and facial injuries».

«The missiles were launched from Lebanese airspace, where Israeli planes were sighted to perform low-level flights during the time of the incident, according to the Al-Mayadeen and Al-Masdar News and other regional sources» adds the Russian independent network. Even if at least three missiles were intercepted, in addition to the victims, a number of houses on the outskirts of Damascus suffered “material damage”. The objectives supposedly included the Mezzeh military airport near Damascus, as well as the nearby cities of Jamraya, Sahnaya, and Daraya. Another site was also targeted in the Governorate of Homs, near the border with Lebanon.

«Israel, which has repeatedly made cross-border incursions into Syria, but has rarely admitted them, has yet to comment on the latest incident – highlights Russia Today – However, in recent weeks, Tel Aviv has confirmed that it has hit numerous army installations Syrian, in retaliation for the cross-border tensions surrounding the occupied Golan Heights».

Until a few months ago the presence of the Quds Forces of the Iranian Pasdaran and that of the Lebanese Hezbollah, large Muslim militias of Shiite confession opposed to the Sunni-Wahhabi confession of the Saudi allies of Israel, had been the motivation for the IDF’s attacks in Syria. All this despite the fact that the Shiite military was important in helping Syrian President Bashar Al Assad defeat ISIS jihadist war.

Now that the tensions between Iran and the US, allies of the Sunni Arab countries, have all moved to the Persian Gulf, the Golan becomes the shameful excuse of the Israel to attack the Syrians in the hope of lighting the fuse of an international conflict in the face of a energetic reaction of Assad’s army to legitimize further occupations and bombings.

«Damascus on several occasions has urged the United Nations to end these blatant violations of sovereignty by Israel. The Syrian government believes that the Israeli attacks only support the fighting spirit of the terrorists left in the country» concludes Russia Today confirming the total uselessness of the UN building in New York, under perennial check by the US.

A truly disgusting story of ethnic-religious racism that confirms Gospa News’s intuition to describe Benjamin Netanyahu, Israel’s premier of a prorogatio government, as the new Hitler of the third millennium. Also for the arms trade of Israelian industries with the neo-Nazis fighting the civil war against the pro-Russian Donbass.