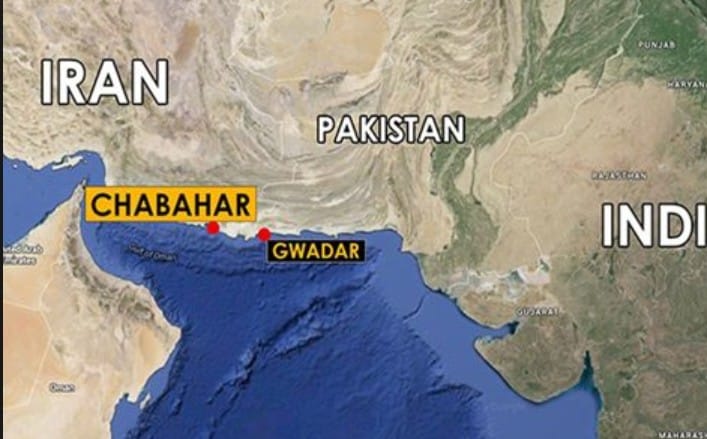 An analytical article, written by Vinay Kaura was published on the Indian news website “The Print.in”, Updated: 25 June, 2019.

It contains subtitles “India needs Chabahar Port more than ever now, but Trump’s reckless behaviour could ruin it. China and Pakistan have been working overtime to woo Iran and integrate it into their strategic nexus against India”.

In the analysis, Vinay Kaura wrote: “Tensions between the United States and Iran are at an all-time high. And, if hostilities do break out, it would be a huge geopolitical setback for India for multiple reasons, not least because of its impact on oil prices. Ever since President Donald Trump withdrew from the nuclear deal with Iran and re-imposed economic sanctions, pressures have been building.

The downing of an American surveillance drone by Iran…the subsequent threat by Trump of retaliation has made matters worse for regional security.

Iran has already declared that it would soon breach the limit on nuclear material agreed upon in the 2015 nuclear deal, further escalating the crisis. The US is also planning to send additional troops to the region.

Although the mediatory mission that Japanese Prime Minister Shinzo Abe undertook to help lower the political temperature between Iran and the US did not bear fruits, this de-escalation mission to Tehran should ideally have been undertaken by Prime Minister Narendra Modi, even at the risk of its imminent failure.”

Vinay Kaura further wrote: “New Delhi has a specific reason to be extremely concerned about the Iran situation. India believes that its strategic ambitions in Central Asia can be realised with Iranian support. India’s commitment  to building Iran’s Chabahar Port on the Gulf of Oman, connecting India to Afghanistan, through which it can gain access to Central Asia and Eurasia bypassing Pakistan…

It is also a counterweight to the Gwadar port, a China-Pakistan joint venture. When the 2015 nuclear deal on Iran was clinched…here was widespread feeling in India’s strategic circles, and even among some in Washington, that the US could begin moving troops and supplies through Chabahar. This was the easiest way to reduce America’s over-dependence on Pakistan…

Following this optimistic scenario, Iran, India and Afghanistan signed a trilateral agreement in 2016, which allows the three countries to open new connectivity routes by converting Chabahar port into a transit hub.

But the regional context has perhaps changed remarkably with Trump’s determination to exit from the bloody Afghan theatre…Washington not only lost a huge opportunity to develop an alternate route benefiting American interests in Afghanistan, but also put a question mark over the Chabahar project.

New Delhi has substantially reduced its energy dependence on Iran due to sustained pressure from Washington, and the India-backed Chabahar Port has so far remained outside the purview of American sanctions on Iran reimposed in 2018. But if the US-Iran relations deteriorate further, India’s Chabahar geopolitics is bound to suffer irreversible damage. No port can survive without a viable commercial ecosystem.”

While comparing the Chabahar and Gwadar projects, Vinay Kaura elaborated:

“And the Gwadar port is already far ahead of Chabahar port in terms of infrastructure and business potential. If military tensions rise, it will hit commercial activities in Chabahar port.

This would be music to Pakistan and China’s ears…Although China has been Pakistan’s ‘all-weather friend’ for more than half a century, the scope and dimension of political, economic and military cooperation between the two have been on the rise ever since Xi Jinping came to power.

Xi unveiled the Belt and Road Initiative (BRI) as a way to make China a preeminent global power, and Pakistan’s geostrategic importance for China also increased manifold…The geography of Gwadar is very interesting.

Situated at the mouth of the Arabian Sea, the Gwadar port is part of the Balochistan province in Pakistan. The geostrategic significance of the Gwadar port, on which the success of the China-Pakistan Economic Corridor (CPEC) depends, can’t be overestimated. China has pumped in big money to develop the port.

If China sees the Gwadar port as a convenient bridge to connect with the Middle East, Pakistan has reasons to regard the port as a counterweight to the growing strategic convergence between India and the US…If Iran gets militarily punished by the US, Tehran’s resultant diplomatic isolation and economic suffering would present China and Pakistan with the greatest opportunity to integrate Chabahar with Gwadar. This would defeat the very foundation of India’s geopolitical plans in Afghanistan and Central Asia through the Chabahar port. This will also increase Chinese influence in the region.”

“Afghanistan has been totally dependent on Pakistan’s Karachi port for its imports and exports. Without access to Chabahar, it will not be possible for Afghanistan to pursue an independent foreign policy. And this is certainly not what India wants for its regional ally. China and Pakistan have been working overtime to woo Iran to integrate into their strategic nexus against India.

Last month, Iranian foreign minister Javad Zarif, during his interactions with Pakistan’s civil-military leadership in Islamabad, reportedly said that Iran has a proposal for the government of Pakistan for connection between Chabahar and Gwadar…

We believe that Chabahar and Gwadar can complement each other. Can India afford to ignore Iran’s overtures to China and Pakistan?…Russia’s newfound interest in boosting ties with Pakistan has already complicated India’s position…There is no doubt that if the Chabahar port really gets entangled in Trump’s reckless machinations, it will be a major geostrategic setback for India. New Delhi cannot avoid addressing this challenge even though Narendra Modi may not be interested in shuttle diplomacy.”

However, this analytical article or news item shows the realistic approach of the Indian writer Vinay Kaura. But, it needs further analysis in light of the latest developments.

In the joint statement on June 26, 2019, besides other matters, Foreign Minister S Jaishankar said: “We pushed for a constructive and pragmatic view on issues related to trade. India would be guided by its own national interest when it came to purchasing defence systems from Russia”.

“The US wants greater market access. We’ve got to get the economic piece right…US-India partnership is already beginning to reach new heights, including our defense corporation and our common vision for free and open Indo-Pacific…Iran is the biggest state sponsor of terror.”

Both the foreign ministers stated that they would look for ways to work through these issues which also include US opposition to the $ 5 billion S 400 defence deal between India and Russia.

“I look forward to speaking with Prime Minister Modi about the fact that India, for years having put very high Tariffs against the United States, just recently increased the Tariffs even further. This is unacceptable and the Tariffs must be withdrawn!”

Indian and American analysts opined that China’s growing influence in the Indo-Pacific region and Beijing’s greater assertiveness over the larger Indian Ocean region have helped draw New Delhi and Washington closer over the years.

It is notable that India was openly opposing the China Pakistan Economic Corridor (CPEC) which is part of China’s One Belt, One Road (OBOR) or China’s Belt and Road Initiative (BRI), America also joined New Delhi. In this context, on October 3, 2017, the then US Defence Secretary James Mattis told the Lawmakers, “The United States has reiterated its support for India’s opposition to China’s One Belt, One Road initiative…the China-Pakistan Economic Corridor”.

It is mentionable that the seventh round of talks began between the American officials and Taliban representatives in Qatar’s capital on June 29, this year, after the US stated that it hoped for a peace deal before September 1, 2019. Reports suggest that America has agreed to the main condition of the Taliban regarding withdrawal of the US and NATO forces from Afghanistan.

Notably, after the withdrawal of the US-led NATO forces from Afghanistan, India will have to roll back its multi-faceted network from that country owing to the stiff resistance of the Taliban, as New Delhi supported the US-led militants of the Northern Alliance against the Taliban in the war-torn country.

On the other side, taking cognizance of the new developments, Kabul is rapidly improving its relations with Pakistan. Afghanistan is also likely to join the CPEC. Because of America’s hostile and aggressive diplomacy, Iran could abandon the Chabahar project and would also join the CPEC.

Besides, these developments will thwart Indian strategic goals to expand access to Central Asia, Eurasia and the Middle East. Hence, we should agree with the analysis of Vinay Kaura that Pakistan and China would be the beneficiaries and India will be the looser over the strategic contention between Gwadar port and Chabahar port.

Sajjad Shaukat writes on international affairs and is author of the book: US vs Islamic Militants, Invisible Balance of Power: Dangerous Shift in International Relations
Email: [email protected]