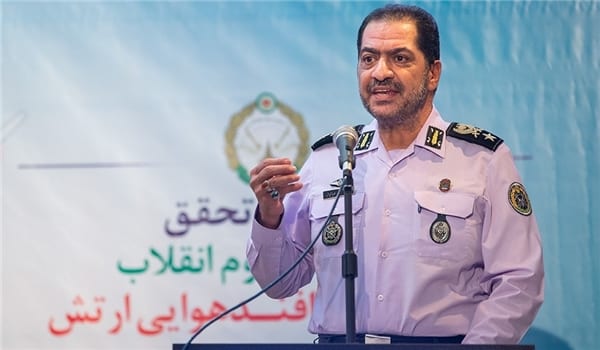 Commander of the Iranian Army’s Khatam ol-Anbiya Air Defense Base Brigadier General Alireza Sabahi Fard pledged to hand the enemies the harshest response in case of any hostile move against the country, saying that Iran is in possession of secret weapons to be used in ‘rainy days’.

“Our deterrence and secret weapons have stopped the filthy enemy 200 miles away (from the Iranian borders) in the Strait of Hormuz,” General Sabahi Fard said, addressing a forum in Tehran on Wednesday.

“The enemy knows very well that it should not go for testing Iran’s combat capability as its first mistake will be its last,” he added.

Sabahi Fard said enemies are exerting maximum pressure, use the most hostile rhetoric against Iran and have widened their military buildup in the region to intimidate the Iranian nation into holding talks with the US, but only in vain.

In relevant remarks last Monday, Commander of Khatam ol-Anbia Headquarters Major General Gholam Ali Rashid advised the US to take lesson from its failed military adventures in Iraq and Afghanistan, warning that Iran would give a strong and crushing response to any aggression.

“The Islamic Republic of Iran’s Armed Forces will undoubtedly give a strong response to any aggressive move by enemies against the Islamic Iran’s islands and sea, ground and air borders and will make them regret their deeds,” General Rashid said.

He also cautioned that in case of any war between the US and Iran, no one could control its duration, magnitude, vastness, and said, “The US should have taken a lesson from its mistakes of Iraq and Afghanistan invasions which imposed $7,000bln of expenses (on the US) and 70,000 casualties on these countries, and avoid making an irreversible mistake in its calculations when making decisions.”

He also underscored the Iranian military commanders’ prudence and intelligence superiority to prevent a war, meantime, warning that the country’s Armed Forces are more than ever ready to inflict heavy expenses on the aggressors and make rapid and timely decisions.