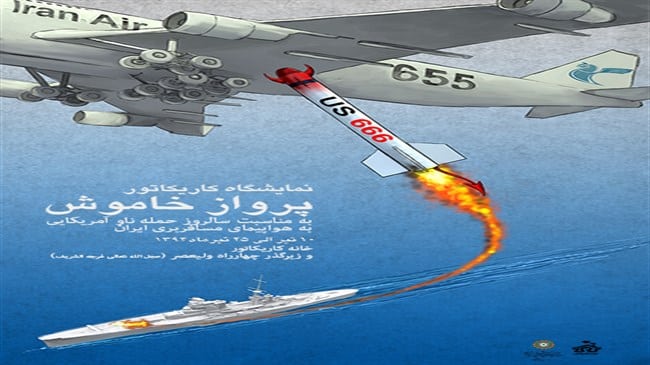 Twenty eight years ago, on July 3, 1988, US Navy guided missile cruiser, the USS Vincennes, shot down Iran Air 655 over the Persian Gulf, a three-day-a-week flight from Bandar Abbas to Dubai, killing all 290 people aboard.

At the time, the Pentagon officials tried to alter their accounts. They initially claimed to have targeted what they called “an aggressive Iranian jet fighter coming in at the USS Vincennes.” Then they said it was a case of mistaken identity by radar equipment that is supposed to detect even the minutest detail of a flying object.

On Aug. 19, 1988, seven weeks after the event, the Pentagon issued a 53-page report on the incident. The text found that nearly all the initial details about the shoot-down – the “facts” that senior Pentagon officials cited to put all the blame on Iran Air’s pilot – were wrong. And yet the August report still concluded that the captain and all the other Vincennes officers acted properly. 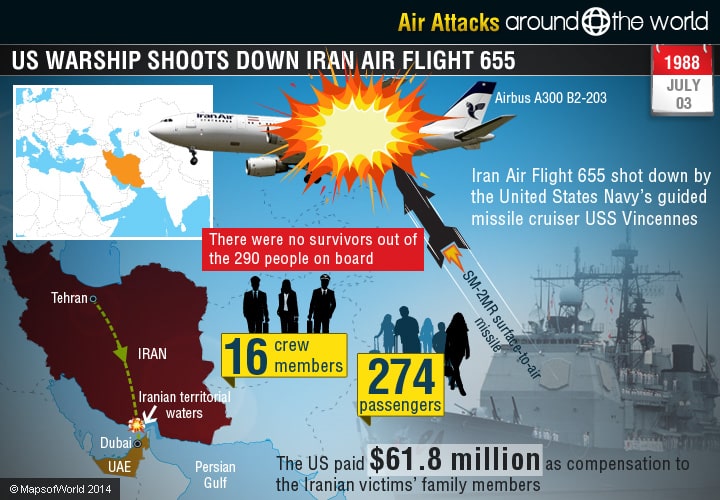 Here is the dismaying part of the story:

-Tragedies like this will happen again – deliberately or unintentionally – because America refuses to leave the Persian Gulf waters. Best to avoid another tragedy like this is for the War Party to pack up and leave.

-It is best to own up to horrible mistakes. America might have come away with a better image, at a crucial moment in Middle East conflicts, if President Reagan or George H.W. Bush had quickly acknowledged what was clear to several senior officers, admitted blame, and compensated the victims. Image isn’t everything; there are still policy disputes to be had. But to engage in such transparent deception and criminality only created and confirmed an impression of mendacity and evil.

-Whoever ordered or fired that missile should be held to account, including the crewmen of the Vincennes. It may be a good moment now to change the climate. But that requires realism on all sides, not indulgent theatrics or the forgetting of history.

-The destruction of Iran Air Flight 655 was state terrorism per se. It damaged America’s world standing as regards International Law and International Human Rights Law. For the US Navy, it was a professional disgrace. Its most expensive surface warship, designed to track and shoot down as many as 200 incoming missiles at once, had blown apart an innocent civilian airliner in its first time in combat.

-As reported by Newsweek, the Vincennes was inside Iranian territorial waters a the time of the shoot-down – in clear violation of international protocols. The top Pentagon brass understood from the beginning that if the whole truth about the Vincennes came out, it would mean humiliating headlines and international condemnation. So the US Navy told lies and handed out medals.

-Since the tragedy of Iran Air Flight 655, the Iranian Coast Guard have been carrying out an array of maritime duties 24/7, from ensuring safe and lawful commerce to performing rescue missions, border security and naval drills in severe conditions. Tens of thousands of men from the Navy and the Islamic Revolution Guards Corps are now actively serving in the Coast Guard to defend borders, even if that requires detaining US Navy troops for trespassing the Iranian territorial waters.

This is the dismaying story of what happens when the United States decides to lord over a region as volatile as the Persian Gulf. Pentagon’s official investigation into the incident, the Fogarty Report, was a pastiche of omissions, half-truths and outright deceptions. It was a cover-up approved at the top, a cover-up that continues in other parts of the region as well.

What else can you expect from a government that has killed tens of thousands of innocent civilians in its illegal drone wars, yet claims it has only killed between 64 and 116 “non-combatants” in 473 counter-terrorism strikes in Pakistan, Yemen, Somalia and Libya between 2009 and 2015?!

This is a fraction of the civilian casualty range recorded by the Bureau of Investigative Journalism from reports by local and international journalists, NGO investigators, leaked government documents, court papers, and the result of field investigations.

As is, the Vincennes saga is more than a mere shocking bit of forgotten history. There are parallels between then and now, lessons to be learned: There was no justice for the victims of Iran Air Flight 655. There will be no justice for the civilian victims of America’s endless War on Terror, air and drone strikes, and targeted killing program.