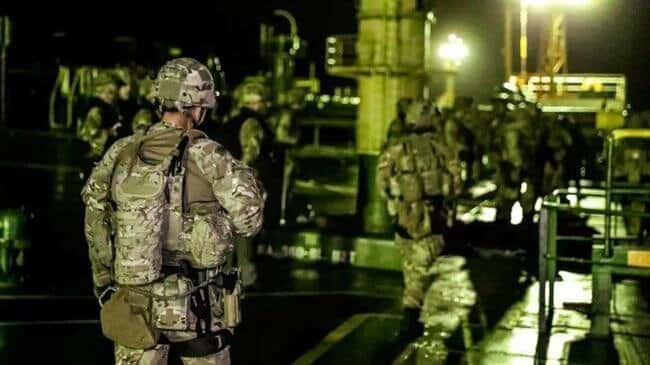 Has Sanctions Hooliganism arrived on the geo-political scene?

[ Editor’s Note: Will the British seizure of the Iranian oil supertanker accidentally trigger a tit for tat ship grabbing spree, or was this actually the intent of seizing the tanker?

Initiating such a farce would unleash navies and boarding parties to roam the oceans looking for selected victims who have been politically designated as hijack targets by a growing list of unipolar wannabes.

What happened to such events having to be approved by the UN Security Council? Is it on summer vacation?

Spain says the US made the request. The Saudis are holding another Iranian ship that broke down, holding the crew, plus charging $200,000 per day for dock space.

That sounds a little steep to me. I smell a campaign here to start snagging Iran’s ships to cut off their ability to trade, all based on the US pulling out of the JCPOA, an agreement that was also cleared by the UNSC.

I don’t think Iran is going to grab a British tanker, but we might see a shortage of them in the Persian Gulf for a while. But some British assets might be grabbed somewhere for the crime of participating in non-UNSC sanctions-hooliganism.

It looks like the Brits are getting on the Trump train by pulling stunts that will get a big media splash to keep the public attention on a particular target. And mind you, Britain, in word at least, has remained in the JCPOA… Jim W. Dean ]

A senior Iranian official has called for the seizure of a British oil tanker in case London refuses to release the Iranian vessel it has illegally detained in Gibraltar.

“If Britain does not release the Iranian oil tanker, it is the authorities’ duty to make a reciprocal move and seize a British oil tanker,” said Major General Mohsen Rezaei, a top IRGC general and the secretary of Iran’s Expediency Council.

He said the Islamic Republic has never been the initiator of tension in its 40-year history, but it also will never hesitate to respond to bullies.

Iranian supertanker Grace 1 was boarded and impounded by Gibraltar police and customs agencies, aided by a detachment of British Royal Marines, on Thursday at the US request in the Strait of Gibraltar.

Later in the day, Iran’s Foreign Ministry summoned Britain’s ambassador to the country to express its strong protest at the move.

At the Foreign Ministry, Rob Macaire was told that the British Royal Marines’ move was tantamount to “maritime piracy”, and that the UK must immediately release the oil tanker.

It was also emphasized that the Islamic Republic of Iran will employ all its political and legal capacities to secure the release of the vessel and uphold its rights.

Spain, which challenges the British ownership of Gibraltar, said the action was prompted by a US request to Britain and appeared to have taken place in Spanish waters.

Experts believe the measure taken by the British government in seizing the Iranian tanker is illegal and can have serious consequences for the government in London.

The US has pledged to reduce Iran’s oil exports to “zero” as part of the sanctions that it reinstated after leaving a multilateral nuclear deal with Iran last year. Both Washington’s withdrawal from the deal and its reintroduction of the sanctions came while the accord has been ratified in the form of the United Nations Security Resolution 2231.