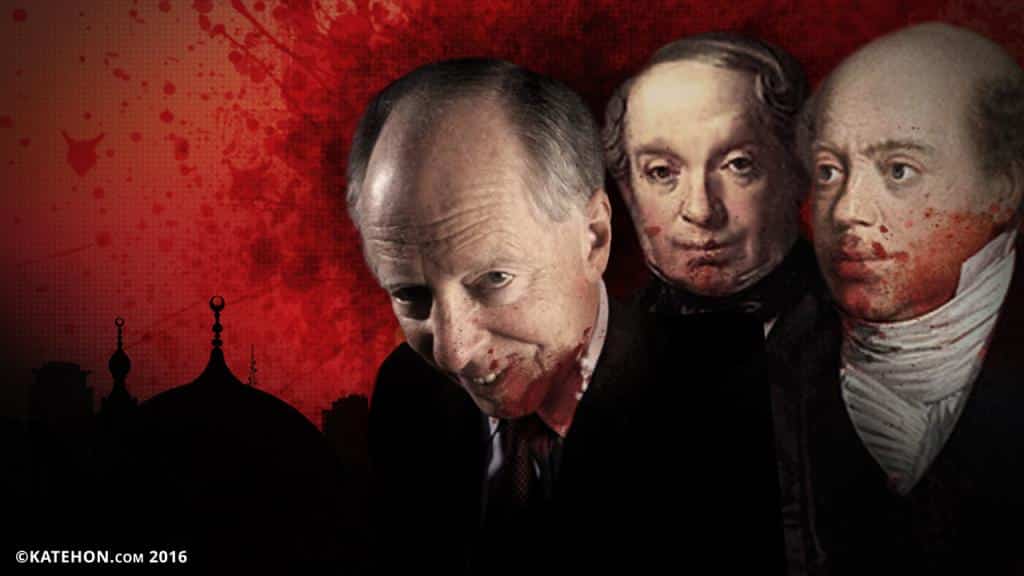 “I believe that banking institutions are more dangerous to our liberties than standing armies.” —Thomas Jefferson

Jonas E. Alexis: During the Revolution of 1848, Karl Marx wrote that “the Jew, who in Vienna, for example, is only tolerated, determines the fate of the whole Empire by his financial power. The Jew, who may have no rights in the smallest German states, decides the fate of Europe. This is not an isolated fact. The Jew has emancipated himself in a Jewish manner, not only because he has acquired financial power, but also because…money has become a world power and the practical Jewish spirit has become the practical spirit of the Christian nations.”[1]

Marx had the Rothschilds in mind when he wrote this. Heinrich Heine likewise noted, “No one does more to further the revolution than the Rothschilds themselves…and, though it may sound even more strange, these Rothschilds, the bankers of kings, these princely pursestring-holders, whose European-state system, nevertheless carry in their minds a consciousness of their revolutionary mission.”[2]

According to Heine, “the Rothschild ‘system’ is also potentially revolutionary in itself” because since it “possesses the moral force or power which religion has lost, it can act as a surrogate for religion—indeed, it is a new religion, and when the old religion finally goes under it will provide substitutes for its practical blessings strangely enough, it is once again the Jews who invented this new religion.”[3] Heine saw James Rothschild as “a powerful destroyer of patrician privilege, and the founder of a new democracy.”[4]

British philo-Semitic historian Niall Ferguson noted that “not only had the Rothschilds replaced the old aristocracy; they also represented a new materialist religion. ‘Money is the god of our time,’ declared Heine in March 1841, ‘and Rothschild is his prophet.’”[5] Heine saw this as dangerous. Marx saw it too. The “new materialist religion” was Mammon, which came in the form of capitalism.

The Rothschilds were part of the banking cartel then, and they are still trying to manipulate the economic infrastructure in even countries like South Africa. But there is more here than meets the eye and ear. Henry Makow is going to unpack these deep things for us.

Henry Makow: In November 1949, Eustace Mullins, 25, was a researcher in Washington DC when friends invited him to visit the famous American poet Ezra Pound, who was confined at St. Elizabeth’s Mental Hospital and listed as a “political prisoner.”

A leading figure in Modern English literature, Pound was the editor and critic who introduced the world to James Joyce, W.B. Yeats and T.S. Eliot. During the Second World War, he was charged with treason for broadcasts on Rome Radio that questioned the motives behind America’s involvement.

Pound commissioned Mullins to examine the influence of the banking establishment on U.S. policy. Mullins spent every morning for two years in the Library of Congress and met with Pound every afternoon. The resulting manuscript, “The Secrets of the Federal Reserve” proved too hot for any American publisher to handle. Nineteen rejected it. One said, “you’ll never get this published in New York.” When it finally appeared in Germany in 1955, the U.S. Military Government confiscated all 10,000 copies and burned them.

Thanks to the American Patriot Friends Network, this book is freely available on line. (I recommend you save it on your desktop, as I did.) Why is it so (excuse the pun) inflammatory?

Essentially it paints a picture of the world, and the role of the United States, which is radically different from the one we are given in school or in the media.

“Notwithstanding the war of independence against England,” writes Mullins, “we remained an economic and financial colony of Great Britain.” Between 1865 and 1913, he says London bankers led by the Rothschilds used agents such as J.P. Morgan and J.D. Rockefeller to gain control of American industry and organize it into cartels.

Where did these bankers get the money? For over 200 years, European bankers have been able to draw on the credit of their host countries to print it!

In the Seventeenth Century, the moneylenders and the aristocracy made a pact. If the king would make paper currency a liability of the state, the moneylenders would print as much as he liked! Thus the Banks of England, France and the Reichsbank came into being but they were all private corporations and remain so today.

According to this nefarious pact, the moneylenders got to charge interest on assets they created out of thin air. The aristocracy all took shares in the central banks plus they got to finance a burgeoning government and to wage costly wars.

This piece of chicanery is at the heart what plagues humanity. 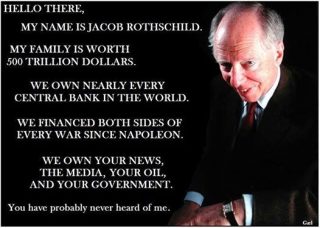 The bankers have a vested interest in the state (i.e. the people) incurring as much debt as possible. They are behind the Marxist, socialist and liberal movements which call for big government and social spending. They are behind the catastrophic wars of the last century. The Warburgs financed the Bolshevik Revolution.

Naturally if you can create money out of thin air, your first instinct is to buy tangible assets with it. There is a powerful impulse to use debt to control nations and take over their real assets. This is the essence of the so-called Third World Debt crisis. Dedicated to owning all wealth and enslaving humanity, an irresistible vampire has been unleashed upon the world

Much of Mullins book is devoted to the subterfuge by which the United States was drawn into its lethal embrace. In 1913, the Owen-Glass Bill gave mostly foreign-controlled banks (posing as “the Federal Reserve”) the right to create currency based on the credit of the United States government and to charge it interest for doing it!

To accomplish this, the bankers had to rig the election of 1913 in order to get Woodrow Wilson elected. Then their stooges in Congress passed the legislation on December 22 after their opponents had gone home for Christmas.

“This act establishes the most gigantic trust [cartel] on earth,” Congressman Charles Lindbergh said at the time. “When the President signs this bill; the invisible government by the Monetary Power will be legalized. The people may not know it immediately but the day of reckoning is only a few years removed.”

Mullins explains that the legislation passed just in time for the American people to finance World War One. After maintaining standing armies for 50 years, European powers no longer could afford the luxury of another war. But the U.S. was relatively debt free and made the whole thing possible.

What would WWI have been without Germany? Apparently Germany was not self-sufficient in food and would have had to sit out this war. In the nick of time, the bankers organized something called “The Belgium Relief Committee” which channeled billions of dollars worth of U.S. meat and potatoes not to Belgium but to Germany. When Edith Cavell, an American working in a Belgium hospital pointed this out, British intelligence had the Germans arrest and execute her.

Mullins makes a convincing case that every U.S. President since Wilson has been a lackey of the bankers. J.F. Kennedy was assassinated because he started to print his own U.S. government-backed currency. This is also the transgression that led to the murders of Presidents Abraham Lincoln and James Garfield.

In 2001 alone, the American people paid $360 billion in interest to the bankers. To maintain this massive fraud, the bankers enforce an iron grip on the political and cultural organs of the nation. According to Mullins, “The New York Times” is owned by the Kuhn Loeb while “The Washington Post” is owned by Lazard Freres. In Europe the Rothschilds own Reuters as well as the French and German news services.

I presume US publishers, TV networks and movie producers are similarly beholden. Rockefellers, Carnegies and the Fords endow the nations’ libraries and universities. Journalists and professors dutifully parrot fantasies about democracy and freedom. Mind control laboratories run by the CIA and the British army (The Tavistock Institute) dream up ways to manipulate and undermine the population. The psychological sterilization of the human female is an example.

The “War on Terror” is part of the banking cabal’s plan to consolidate its grip on humanity in a friendly (or not so friendly) fascist “New World Order.” They want to secure their political, economic and social grip on the obstreperous Muslim world, as well as build up a security apparatus in case the docile populations of the West become restive.

Well, at least the cosmic battle between Good and Evil is out in the open at last!