Home Government NEO – What shape will a military standoff take in Asia? 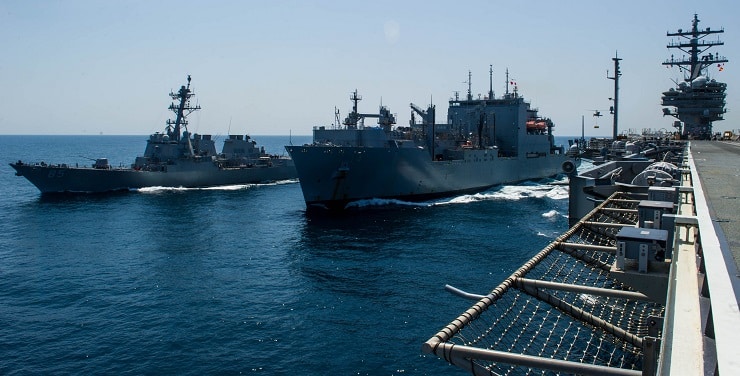 [ Editor’s Note: Mr. Kulikov delves into a complicated geopolitical area that few journalists dare to wade into. This is what we love about our association with NEO, having access to professional writers whose goal is not to be Google click-bait wonders, but to do the laborious hard work of well-researched geopolitical analysis.

He has laid out for us today an historical review of the West’s security organization history, starting with NATO, up to its current evolution of now wanting to form cannon fodder coalitions to take on potential opponents.

And by that I do not mean just military ones, as the Deep State hucksters know there are not enough of those to sustain a long-term growth business. The creative mavens and their Intel ops buddies have looked for anyone who cannot be economically dominated as a potential threat, so that a new coalition has to be formed to defend against their offense of resisting Western colonization.

The key part of Kulikov’s work below is the material on the new Asian organizations being formed that are different from the West.

Led by Mr. Unipolar Trump, his new coalitions are pushing into historically colonial domains far from home by using any pretext they can think of, such as “securing shipping lanes”. But the move has stimulated the Asian countries to begin forming their own coalitions, but not for the purpose of deploying military muscle in the West.

It seems that the fear of a careening, debtor American nation tending to devour other economies to stay alive has them all worried; and the first step is to not let themselves get picked off one at a time, or played off each other in the age old divide and conquer game… Jim W. Dean ]

Over the last 70 years, countries in APAC (Asia Pacific) have shown rapid economic growth, thereby attracting more and more interest to this region from world players, which has resulted in a battle for influence among them in this part of the world.

During this period, Japan was the first to embark on its path towards development and prosperity, then Taiwan, South Korea, Singapore and some other nations in South East Asia followed suit. At present China, India and a number of other countries have also set off on a similar journey.

For a long time, bilateral relationships served as the foundation that ensured regional security in Asia. However, the situation in this part of the world is constantly changing, and the nations in this region are becoming more and more interdependent from an economic and political perspective.

Their military bodies are also starting to form alliances as a result. They are fostering closer ties in order to meet a common challenge of ensuring security and stability, which are key to a prosperous future built on sound principles. Currently, these relations are at the core of any efforts to create and develop joint plans, or to stage joint exercises and training.

As far back as 1951, a Western idea to form a military and political alliance capable of countering the threat posed by China (which was even then viewed by Washington as one of its key regional rivals) became a reality when three English-speaking nations signed the Australia, New Zealand, United States Security Treaty (ANZUS).

Four years later, the Southeast Asia Treaty Organization (SEATO) was established (with its headquarters in Bangkok, Thailand) and comprised of Australia, Great Britain, New Zealand, the USA, France, Thailand, Pakistan and the Philippines.

The aim of this entity was to block any further gains made by national freedom movements in South East Asia and the Pacific Ocean region. However, soon after disagreements began among SEATO members, and in 1977 the organization was officially disbanded.

At present, only ANZUS continues to exist but it also has its issues. For example, when New Zealand refused to allow American ships carrying nuclear weapons to enter its ports, the bilateral agreement on cooperation between these two nations was severed.  Still, military units from all three member-states, i.e. the USA, Australia and New Zealand, took part in the Afghan and Iraqi military campaigns.

In the current climate and also because of a substantial rise in tensions between the USA and China, in recent years the United States has used its military alliance with Japan and South Korea in the APAC region as a strategic instrument in order to increase U.S. influence in Northeast Asia and to deter the DPRK, China and Russia.

There have been increased efforts to reinforce it after the 15th annual inter-governmental forum on security issues in Asia Pacific (APAC), the so-called Shangri-La Dialogue (SLD), was held in Singapore in 2016.

Extensive and varied preparations to establish an Asian version of NATO, which will be headed by the United States, have also begun. Washington is actively striving to include Japan, Thailand, Vietnam, Australia, India, South Korea, Singapore, the Philippines and Malaysia in the new military alliance as its key members.

The main aim of the new organization, as envisioned by U.S. strategists, is to counter China’s growing influence in the region.

As of recent, aside from anti-Chinese and anti-Russian military alliances, led by the United States, an openly anti-Iranian shift has become more evident, illustrated by, among other things, the fact that Washington is actively striving to create a so-called Arab NATO as well as an anti-Iranian coalition in the Persian Gulf.

It was, therefore far from unexpected that Iran’s Minister of Defense, Hossein Dehghan, suggested that Russia, India and China join their efforts to combat terrorism advocating takfirism during a Conference on International Security, held in Moscow in April of this year.

In the aforementioned climate, it is not surprising that the PRC and the Russian Federation, which openly oppose a unipolar world dominated by Washington from a political, economic and military perspective, also intend to create alliances and coalitions to rival the U.S. equivalents.

The Shanghai Cooperation Organisation (SCO), founded in 2001 and comprised of China, Russia, Kazakhstan, Tajikistan, Kyrgyzstan and Uzbekistan, is one such alliance. It began at the signing of the Treaties on Deepening Military Trust and on Reduction of Military Forces in Border Regions by the heads of states of Kazakhstan, Kyrgyzstan, China, Russia and Tajikistan in 1996-1997.

However, it is not a military alliance (as for example NATO is). The key aims of this organization are to improve stability and security in the vast region, where the member-states are located; to combat terrorism, separatism. extremism and drug trafficking; to enhance economic, cultural and scientific cooperation, and to prioritize joint energy projects.

During the Conference on Interaction and Confidence Building Measures in Asia (CICA), which was held for the 5th time since 1992 on 15 June in Tajikistan shortly after the Shanghai Cooperation Organisation Summit, Beijing made an important proposal.

China’s leader Xi Jinping urged Asian nations to create a security organization similar to NATO. In his speech during the forum, Xi Jinping focused on the fact that Asian countries face common challenges from the viewpoints of security, national territorial integrity, and trade and economic development.

During this Conference, representatives of Russia as well as Vladimir Putin, the President of the Russian Federation, also criticized the current US approach that has enabled it to circumvent existing rules and norms recently.

They supported the direct challenge issued by PRC’s leader to the United States, having reached a reasonable conclusion that the new steps taken by China to create an “Asian alliance” would certainly act as a counter-weight to the Asian version of NATO, headed by the USA.

Russian President Vladimir Putin reminded others at the Forum that enhancing security had become one of the key challenges for the multi-ethnic Asian continent:

“Truly sustainable stability system in Asia can obviously be achieved only through settling existing crisis situations and conflicts, and persistently combating the threat of terrorism.

To do that, cooperation should be stepped up in identifying and neutralizing terrorist groups and cutting off their financing, including from drug trafficking.

It is a priority to do everything in our power to prevent terrorists from getting hold of chemical, biological or other kinds of weapons of mass destruction, and to thwart propaganda of extremist ideas.”

In addition, participants of CICA highlighted that the world, first and foremost from the perspective of economic ties, is becoming a battlefield where no rules apply primarily because of U.S. actions.

Hence, the proposal, made by PRC’s leader, to create an “Asian alliance” has every chance of coming to fruition.