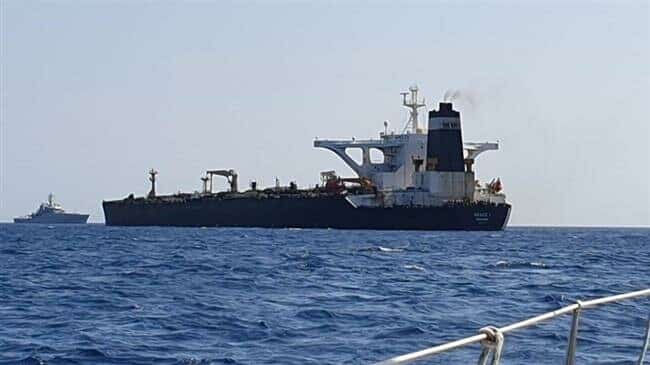 [ Editor’s Note: A new twist today in the British seizure of the Iranian super tanker. Spain says it was grabbed in international waters, not in those under Gibraltar jurisdiction, as Spain does not recognize Britain’s claim to the island.

If Iran wanted to send oil to Syria, it would have been easier and less risky to send a smaller ship through the Suez canal. It actually does not have to send any at all. It can ship oil to a third party, who will then pass it along to Syria.

Iran has boasted that it is skilled at getting around the US sanctions, and it has the legal right to do so when the sanctions are patently illegal, with the US doing it under its new unipolar status doctrine of “What are you going to do about it”; meaning it will use force if necessary. In this case, Britain stepped in to snatch the ship.

And let’s not forget that the US has backed the SDF Kurds in their taking over many of Syria’s oil fields, which were looted by ISIS before that, while the US did nothing, despite the US claiming it was there to fight terrorism.

Iran claims now the oil was not going to Syria, but strangely did not say where it was going to. Part of smuggling oil around is playing musical chairs as to where it is going, or off-loading some of the cargo at sea onto small ships for final delivery, where destination paper work is not a problem if a good cash tip is added to the transaction… Jim W. Dean ]

Iran says an oil supertanker seized by Britain in Gibraltar was not carrying oil to Syria, denouncing the seizure as “maritime piracy”.

British Royal Marines boarded the Grace 1 on Thursday and seized it over accusations it was breaking sanctions by taking oil to Syria.

“Contrary to Britain’s announcement, the tanker was not bound for Syria, and the port mentioned is not capable of receiving such a tanker,” Deputy Foreign Minister Abbas Araqchi told reporters at a news conference in Tehran Sunday.

The seized tanker is a 2 million barrel capacity very large crude carrier (VLCC), Araqchi said, adding it could not pass through the Suez Canal and that was why it had to go the extra mile through Gibraltar.

The tanker was in international waters when it was encroached on, he said, disputing London’s claims that Royal Marines boarded the ship off the coast of the British territory.

Spain has said it planned to lodge a formal complaint about the action, because it considers the sea around Gibraltar to be part of its international waters. Spanish authorities have said the seizure came at the request of the US.

“In this regard, the law will take its course. This is a maritime piracy; the tanker was in international waters,” Araqchi said, adding Iran had summoned the British ambassador to Tehran twice in protest.

“We hope the tanker issue will be resolved soon,” he said.

On Friday, a former chief commander of the Islamic Revolution Guards Corps (IRGC) said Iran should consider seizing a British oil tanker in response to the seizure.

“If Britain does not release the Iranian oil tanker, it is the authorities’ duty to seize a British oil tanker,” Mohsen Rezai said on Twitter.

An Iranian cleric on Saturday said Britain should be “scared” about Tehran’s possible retaliation for the seizure of the vessel.

“I am openly saying that Britain should be scared of Iran’s retaliatory measures over the illegal seizure of the Iranian oil tanker,” said Mohammad Ali Mousavi Jazayeri, a member of the Assembly of Experts.

“We have shown that we will never remain silent against bullying… As we gave a staunch response to the American drone, the appropriate response to this illegal capture will be given by Iran as well,” he said.

Jazayeri was referring to the downing of a US drone last month for intruding Iran’s airspace.

British troops have reportedly left the ship, but police and customs officials were interviewing all 28 crew members remain on the vessel as witnesses. The crew is comprised of mainly Indian, Pakistani and Ukrainian nationals, he said.