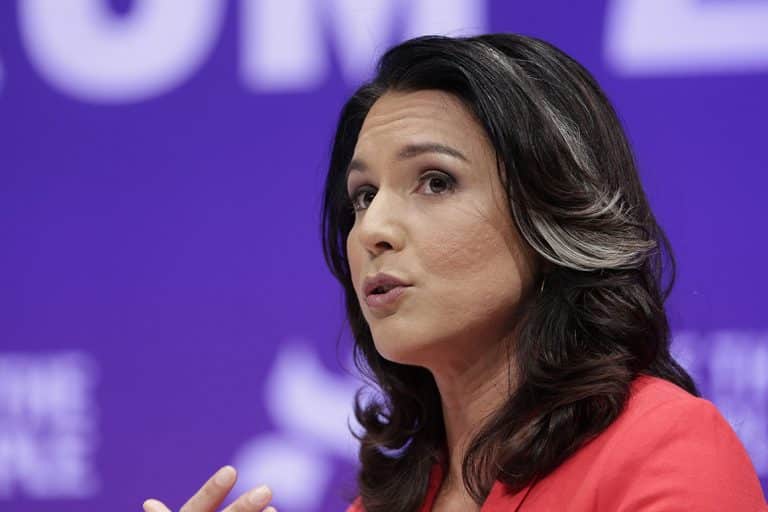 Tulsi Gabbard let the genie out of the bottle

by Phil Giraldi, …via The Unz Review

[ Editor’s Note: Personally I fear the Democrats are rolling the dice on defeating Trump via the huge slate of candidates they have in the race. The justification for it is that more candidates will have issue related constituencies that can all rally around the flag when the blood letting is over at the convention.

But the Hillary gang cutting Bernie Sanders up is a wonderful example that the winning at any cost attitude can make you lose. We have no clues for a repeat of that disaster in 2020, but the race is the Dems to lose.

Phil likes Tulsi, as we do here at VT, a breath of fresh air, no serious baggage, and not prone to say idiotic shallow pandering things to get attention. So the knives will be out for her.

The Israeli Lobby is sifting through the list to see who needs to be trimmed early as examples of not being “pro Israel” enough. All candidates try to avoid this fate. It is hardwired into the system because our security people will simply not bust up Israeli political espionage here, or any the other flavors, economic, military, nuclear, etc.

They always like to have current examples of what going down the political elevator shaft is like for anyone not willing to swear virtual allegiance to Israel, a ghastly shame on the American political system.

It is also a betrayal, and the public bears much of the blame for that, for not hounding those who have sold out at all their public appearances. When you take such abuse laying down, you can’t blame the other party for confusing you with a door mat… Jim W. Dean ]

Last Wednesday’s debate among half of the announced Democratic Party candidates to become their party’s nominee for president in 2020 was notable for its lack of drama. Many of those called on to speak had little to say apart from the usual liberal bromides about health care, jobs, education and how the United States is a country of immigrants.

On the following day the mainstream media anointed Elizabeth Warren as the winner based on the coherency of her message even though she said little that differed from what was being presented by most of the others on the stage. She just said it better, more articulately.

The New York Times’ coverage was typical, praising Warren for her grasp of the issues and her ability to present the same clearly and concisely, and citing a comment .

“They could teach classes in how warren talks about a problem and weaves in answers into a story. She’s not just wonk and stats.” It then went on to lump most of the other candidates together, describing their performances as “ha[ving] one or two strong answers, but none of them had the electric, campaign-launching moment they were hoping for.”

Inevitably, however, there was some disagreement on who had actually done best based on viewer reactions as well as the perceptions of some of the media that might not exactly be described as mainstream. The Drudge Report website had its poll running while the debate was going on and it registered overwhelmingly in favor of Hawaiian Congresswoman Tulsi Gabbard.

Likewise, the Washington Examiner, a right-wing paper, opined that Gabbard had won by a knockout based on its own polling. Google’s search engine reportedly saw a surge in searches linked to Tulsi Gabbard both during and after the debate.

On the following day traditional conservative Pat Buchanan produced an article entitled “Memo for Trump: Trade Bolton for Tulsi,” similar to a comment made by Republican consultant Frank Luntz “She’s a long-shot to win the presidency, but Tulsi Gabbard is sounding like a prime candidate for Secretary of Defense.”

Tulsi, campaigning on her anti-war credentials, was indeed not like the other candidates, confronting directly the issue of war and peace which the other potential candidates studiously avoided.

In response to a comment by neoliberal Congressman Tim Ryan who said that the U.S. has to remain “engaged” in places like Afghanistan, she referred to two American soldiers who had been killed that very day, saying “Is that what you will tell the parents of those two soldiers who were just killed in Afghanistan? Well, we just have to be engaged? As a soldier, I will tell you that answer is unacceptable.”

At another point she expanded on her thinking about America’s wars, saying,

“Let’s deal with the situation where we are, where this president and his chickenhawk cabinet have led us to the brink of war with Iran. I served in the war in Iraq at the height of the war in 2005, a war that took over 4,000 of my brothers and sisters in uniforms’ lives.

The American people need to understand that this war with Iran would be far more devastating, far more costly than anything that we ever saw in Iraq. It would take many more lives. It would exacerbate the refugee crisis. And it wouldn’t be just contained within Iran. This would turn into a regional war. This is why it’s so important that every one of us, every single American, stand up and say no war with Iran.”

Tulsi also declared war on the Washington Establishment, saying that “For too long our leaders have failed us, taking us into one regime change war after the next, leading us into a new Cold War and arms race, costing us trillions of our hard-earned tax payer dollars and countless lives. This insanity must end.”

Blunt words, but it was a statement that few Americans whose livelihoods are not linked to “defense” or to the shamelessly corrupt U.S. Congress and media could disagree with, as it is clear that Washington is at the bottom of a deep hole and persists in digging. So why was there such a difference between what ordinary Americans and the Establishment punditry were seeing on their television screens?

The difference was not so much in perception as in the desire to see a certain outcome. Anti-war takes away a lot of people’s rice bowls, be they directly employed on “defense” or part of the vast army of lobbyists and think tank parasites that keep the money flowing out of the taxpayers’ pockets and into the pockets of Raytheon, General Dynamics, Boeing and Lockheed Martin like a perpetual motion machine.

In the collective judgment of America’s Establishment, Tulsi Gabbard and anyone like her must be destroyed. She would not be the first victim of the political process shutting out undesirable opinions.

One can go all the way back to Eugene McCarthy and his opposition to the Vietnam War back in 1968. McCarthy was right and Lyndon Johnson and the rest of the Democratic Party were wrong.

More recently, Congressman Ron Paul tried twice to bring some sanity to the Republican Party. He too was marginalized deliberately by the GOP party apparatus working hand-in-hand with the media, to include the final insult of his being denied any opportunity to speak or have his delegates recognized at the 2012 nominating convention.

And the beat goes on. In 2016, Debbie Wasserman Shultz, head of the Democratic National Committee, fixed the nomination process so that Bernie Sanders, a peace candidate, would be marginalized and super hawk Hillary Clinton would be selected. Fortunately, the odor emanating from anything having to do with the Clintons kept her from being elected or we would already be at war with Russia and possibly also with China.

Tulsi Gabbard has let the genie of “end the forever wars” out of the bottle and it will be difficult to force it back in. She just might shake up the Democratic Party’s priorities, leading to more questions about just what has been wrong with U.S. foreign policy over the past twenty years.

To qualify for the second round of debates she has to gain a couple of points in her approval rating or bring in more donations, either of which is definitely possible based on her performance. It is to be hoped that that will occur and that there will be no Debbie Wasserman Schultz hiding somewhere in the process who will finagle the polling results.

Yes, to some critics, Tulsi Gabbard is not a perfect candidate. On most domestic issues she appears to be a typical liberal Democrat and is also conventional in terms of her accommodation with Jewish power, but she also breaks with the Democratic Party establishment with her pledge to pardon Chelsea Manning, Julian Assange and Edward Snowden.

She also has more of a moral compass than Elizabeth Warren, who cleverly evades the whole issue of Middle East policy, or a Joe Biden who would kiss Benjamin Netanyahu’s ass without any hesitation at all. Gabbard has openly criticized Netanyahu and she has also condemned Israel’s killing of “unarmed civilians” in Gaza.

As a Hindu, her view of Muslims is somewhat complicated based on the historical interaction of the two groups, but she has moderated her views recently.

To be sure, Americans have heard much of the same before, much of it from out of the mouth of a gentleman named Donald Trump, but Tulsi Gabbard could well be the only genuine antiwar candidate that might truly be electable in the past fifty years.

It is essential that we Americans who are concerned about the future of our country should listen to what she has to say very carefully and to respond accordingly.

Philip M. Giraldi, Ph.D., is Executive Director of the Council for the National Interest, a 501(c)3 tax deductible educational foundation (Federal ID Number #52-1739023) that seeks a more interests-based U.S. foreign policy in the Middle East. Website is councilforthenationalinterest.org, address is P.O. Box 2157, Purcellville VA 20134 and its email is [email protected]ine.org