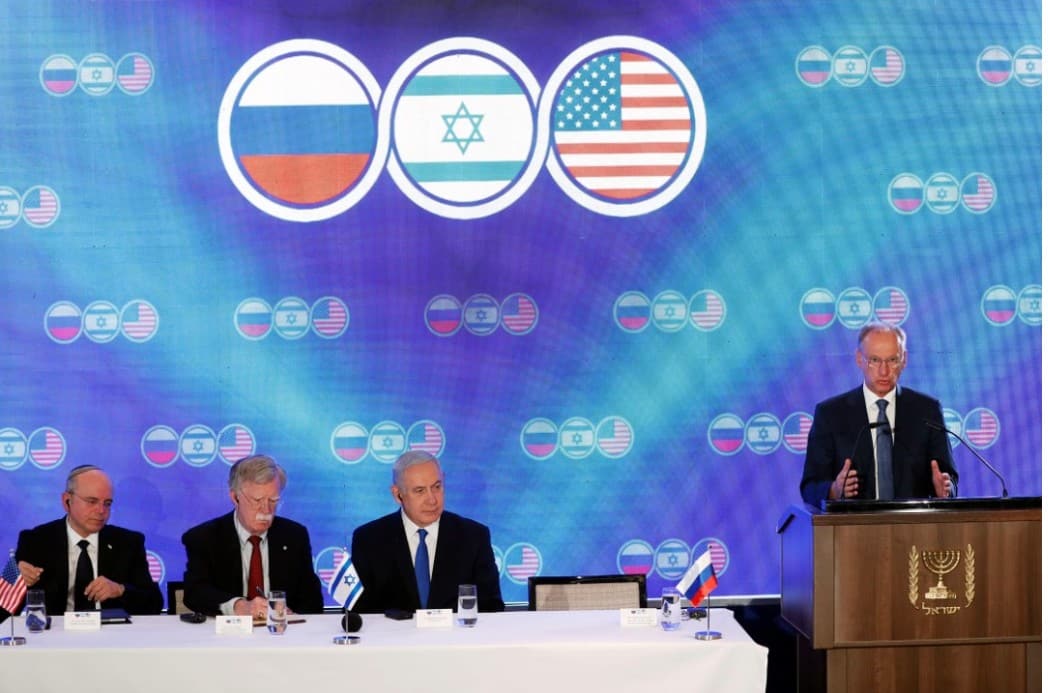 The meeting in Jerusalem in late June between the national security advisers of the United States, Washington, and Israel was a preliminary stage in renewing cooperation between Washington and Moscow on a range of issues.

In the Syrian context, it was a bid to pressure Moscow to reduce aid and support for Iran in exchange for an easing of the Western sanctions imposed on Russia. For its part, Russia is working to brand itself as a mediator between the United States and Iran on issues ranging from the nuclear file to regional influence.

However, the attack on July 1 against Iranian targets in Syria, attributed to Israel, indicates that even if there were understandings among the three advisers, they did not yield immediate results. Israel, therefore, should not rely solely on the Russian resource, and if anything, should increase its readiness for an Iranian provocation of the kind witnessed recently in the series of violent incidents in the Gulf.

Indeed, Iran has already activated the Shiite militias, its proxies in Syria, to attack Israel with high trajectory weapons. It is also liable to exploit the failure of American mediation to demarcate a maritime border between Israel and Lebanon, by encouraging Hezbollah in the future to respond forcibly to Israeli attacks.

Two broad air strikes were carried out in Syria on July 1, 2019. One, attributed to Israel, was against Iranian targets in Syria; the second, attributed to the United States, targeted al-Qaeda operatives in the Aleppo area.

Both strikes, launched approximately one week after the Russian, US, and Israeli national security advisers met in Jerusalem, occurred within an area under Russian air defense systems and incurred no Russian operational response. Hence the question: were the Russians notified of the targets at the Jerusalem meeting?

Approximately 12 different targets were reportedly attacked in a continued demonstration of Israel’s determination to delay and foil Iran’s entrenchment in Syria and efforts to transfer advanced weapon systems to Hezbollah.

However, Israel faces serious Iranian resolve not to give up, and to sustain the entrenchment efforts – even at the cost of destruction and casualties from repeated Israeli attacks – with the twofold goal of building military capabilities that would threaten Israeli directly from within Syrian territory and Lebanon, and strengthening Hezbollah’s missile arsenal in Lebanon.

The meeting in Jerusalem on June 24 was irregular in format, and underscored Israel’s role as an actor so influential in the regional and international spheres that it merited inclusion in contacts between the two superpowers, Russia and the United States.

A positive atmosphere reportedly dominated, but no details of the discussions were leaked. Topics presumably included global matters that affect Russia-US relations, alongside regional matters centering on Iran and the future of Syria.

For Russia and the United States, this was a preparatory meeting for the summit between Presidents Donald Trump and Vladimir Putin during the G20 conference in Osaka on June 27-29, where the two leaders discussed issues ranging from Syria and Iran, to Ukraine, and to North Korea and Venezuela.

There was no formal summary of the meeting, but the public message was that both sides were satisfied with the outcome and saw it as an important stage in renewing the bilateral dialogue and crafting a positive future relationship between the two powers.

As to the Syrian arena, the Israeli attack indicated that even if there were understandings among the three advisers – John Bolton, Meir Ben-Shabbat, and Nikolai Patrushev – they did not yield immediate results.

The main demand likely presented by the US and Israel was for Iran to be pushed out of Syria; in exchange Russia presumably demanded the removal of American and European sanctions imposed on Russia as well as acceptance of Bashar al-Assad’s continuing as President of Syria.

Some see in Moscow’s refusal to sell Iran advanced S-400 air defense systems, along with the absence of a Russian response to the Israeli air strikes in Syria, a signal to Washington that Russia is ready for a comprehensive deal – despite public reports to the contrary (Iran has denied wanting to procure the Russian system, while Russia formally demands Israel stop its attacks and respect Syrian sovereignty).

In any event, a deal that would indeed weaken ties between Russia and Iran and reduce the presence of Iran and its proxies in Syria has apparently yet to be reached.

Indeed, many studies and policy papers have been published recently suggesting that Putin is ready to “sell out” Iran and meet US and Israeli demands that it be removed from Syria. But this assessment has found no corroboration in statements by Putin or other senior Russian decision makers.

In the public sphere at least, there appears to be a dispute between the powers on this issue. Remarks on Iran by Patrushev before and during the meeting paint a portrait of Russian support for Iran.

This impression is surprising, because it is clear that both powers also have an interest in coordinating their positions and cooperating to resolve the Iran crisis – i.e., to impose a new nuclear deal on Iran – as well as in reducing Iranian influence throughout the Middle East.

According to Bolton, there is no dispute between the powers about the need for Iran and its proxies to withdraw from Syria. Patrushev, however, argued that “action should be taken to reduce tensions between Israel and Iran”; the Israeli attacks in Syria are undesirable “and the Israeli concerns can be addressed through non-military means.”

It is possible that regarding Syria, it was agreed that from now on Russia and the United States will act in cooperation to advance a political accord, which apparently would obviate the existing international forums (Astana and Geneva) where efforts are underway to stabilize the country.

Israel’s role in this context was not clear (other than to receive situational briefings), but understandings between Russia and Israel already exist. These center on the military deconfliction mechanism between the IDF and the Russian forces stationed in Syria, as well as strategic agreements on the 100 km that will ostensibly lie between Iran’s forces and proxies and the Golan Heights border.

These are joined by de facto Israeli acceptance of the fact that the Assad regime won the civil war and is the only actor that can stabilize the Syrian system. This understanding was reflected in the lack of an Israeli response to the retaking by Assad forces of the Golan Heights and southern Syria area in the summer of 2018.

Beyond the coordination with Russia, there is an American understanding that there is a value to involvement in the efforts toward an arrangement in Syria. Washington is troubled by the bloodshed that will redouble when the Assad regime – with Russian patronage – decides to conquer the last opposition bastion, in Idlib province.

Close to 3 million people live in the province, including many who were internally displaced, and the main aim of the United States is to prevent a new humanitarian disaster and massive flight of refugees.

Another area at the heart of the American interest is the Kurdish region – approximately one third of Syria’s territory – which is controlled by the Syrian Democratic Forces, a Kurdish-dominated militia that was set up by the United States and took part in the majority of the fighting against the Islamic State in northeast Syria.

The Kurdish militia controls most of the Iraq-Syria border area, a strategic asset for the United States and Israel in the struggle to prevent the creation of a land bridge from Tehran to the Mediterranean Sea: only recently were there reports of agreements to lay train tracks that would link Iran to the Syrian port of Latakia.

Compounding this complex and emerging picture is Turkey, which announced that it would not permit any Kurdish autonomy in the north and the east of Syria, and whose relations with the United States are close to a crisis point, given Turkey’s decision to procure the Russian S-400 air defense system. Russia, for its part, is savoring the financial gain, as well as the wedge driven between the United States and a NATO member.

The picture unfolding is multi-faceted, yet there are a number of lessons that can already be drawn. It is clear that the advisers’ meeting was a preliminary stage in renewing cooperation between Washington and Moscow after President Trump survived Special Counsel Robert Mueller’s investigation, which did not find absolute proof of collusion between Trump’s 2016 presidential campaign and Russia.

An objective of the meeting was to coordinate the agenda for the Osaka summit, and in the Syrian context, it was a bid to pressure Moscow to reduce aid and support for Iran in exchange for an easing of the Western sanctions imposed on it. For its part, Russia is working to brand itself as a mediator between the United States and Iran on issues ranging from the nuclear file to regional influence.

In Patrushev’s statement on Israel – that its problems regarding Iran in Syria can be resolved without resorting to military means – there is a hint that Moscow also seeks to serve as a mediator between Jerusalem and Tehran and relay messages so as to help prevent miscalculations.

It is hard to envision the United States granting Russia a central role in coordination on Iran, and specifically between Israel and Iran. The West’s immense suspicions regarding Russia’s motives and trustworthiness will not allow it to assign Moscow a central role in bringing regional order to the Middle East. Nonetheless, it is clear that steps toward an arrangement cannot be taken without Russia.

Israel, therefore, should not load all of its interests in the porous Russian basket, and if anything, should increase its readiness for an Iranian provocation of the kind witnessed recently in the series of violent incidents in the Gulf.

Iranian self-confidence has been undermined. On the one hand, there are rising worries in Tehran that it could be sold out – not just by the West, but also by its ally Russia. On the other hand, Iran has emerged stronger from the absence of an American military response both to its Gulf moves and to its violation of the nuclear deal in quantity and grade of uranium enrichment beyond the permitted level. Iran is apparently waiting for the right opportunity to take action.

It has already activated the Shiite militias, its proxies in Syria, to attack Israel with high trajectory weapons. It is also liable to exploit the failure of American mediation to demarcate a maritime economic border between Israel and Lebanon, by encouraging Hezbollah in the future to respond forcibly to Israeli attacks.