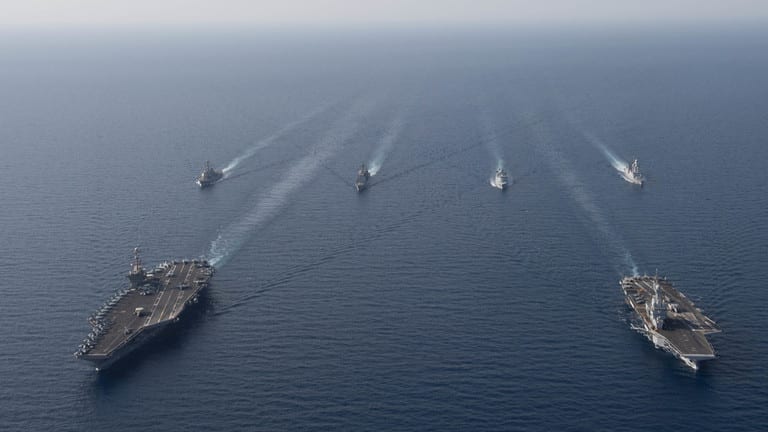 Nebojsa Malic is a Serbian-American journalist and political commentator working at RT since 2015.

[ Editor’s Note: Kinetic irregular warfare has now been added to the tools of destabilization that the US and its forever evolving coalitions are putting in play to keep the musical chairs game going of who is running the Mideast.

Up for grabs is any tool that some particular nation finds agreeable like the British seizing the Iranian tanker near Gibraltar. Mr. Malic wins the gold prize for reporting below that Gibraltar had passed a resolution just the day before to seize the Iranian ship under enforcement of the EU oil sanctions on Syria, not the US ones. Imagine that.

We see the classic “one/two punch” being laid on Syria, with the US having supported Kurdish proxies in taking over Syrian oil independence by seizing its major oil fields on traditionally Arab lands with the backing of the US, and now Syria having its imported oil choked off with this new game of tanker seizing, all incidents where one mishap can trigger a new shooting war.

Someone seems to really want that bad? Who has their feet in the fire where a great big international distraction would take the focus off problems an important person is having

When is the last time we saw a UN statement that this was improper for UN members to to do without a UNSC resolution? Hello UN, is anybody home?… Jim W. Dean ]

Washington has a new tactic in its ongoing campaign against Tehran: outsource the naval blockade of Iran and have allies seize oil tankers in international waterways – all in the name of “freedom of navigation,” of course.
–

The latest out of Washington is that the US is looking to put together a “coalition” that would “ensure freedom of navigation both in the Straits of Hormuz and Bab al-Mandeb,” as Chairman of the Joint Chiefs of Staff General Joseph Dunford said on Tuesday. These are the waterways connecting the Persian Gulf to the Gulf of Oman, and the Red Sea to the Gulf of Aden, respectively.

The US is in contact with “a number of countries” to see which ones “have the political will” to support the project, the Marine general added.

A legitimate policing project, however, would easily get UN approval and not require some kind of revamped “coalition of the willing” that the US used to illegally invade Iraq in 2003. Not to mention that Iran itself has welcomed a truly international security effort.

ALSO ON RT.COMTehran calls for securing of strategic waterways after tankers attacked in Gulf of Oman

At a guess, two of those countries might be the UK and Egypt, judging by their recent seizures of tankers carrying Iranian oil. The British boarding of the Panamanian-flagged Grace 1 in Gibraltar last week is well known. Days prior, however, Egyptian marines had seized a Ukrainian-flagged vessel in the Suez Canal, the Qatari outlet Al-Araby recently reported.

While Tehran has been quiet on the Egyptian seizure, its officials have condemned the taking of Grace 1 as “piracy, pure and simple” and insisted that such behavior sets a terrible precedent and must stop immediately.

Iran is neither a member of the EU nor subject to any European oil embargo.

Last I checked, EU was against extraterritoriality.

UK’s unlawful seizure of a tanker with Iranian oil on behalf of #B_Team is piracy, pure and simple.

It sets a dangerous precedent and must end now.

The UK is a major US ally – and though its navy is a shadow of its former imperial glory, it appears to be capable of taking on unarmed cargo ships just fine. One would think Britain would try to sort out its own affairs first – from who will be the next prime minister to Brexit – before serving as Washington’s cat’s paw, but it wouldn’t be the first time logic has lost out at Whitehall.

The Gibraltar seizure has even some prominent former EU officials scratching their heads, though, since the UK is still technically party to the 2015 nuclear deal with Tehran and should not be bound by unilaterally imposed US sanctions.

The legalities of the UK seizure of a tanker heading for Syria with oil from Iran intrigues me. One refers to EU sanctions against Syria, but Iran is not a member of EU. And EU as a principle doesn’t impose its sanctions on others. That’s what the US does.

The official British explanation is that a Gibraltarian law allows for enforcement of “UN, EU and UK sanctions,” and cites a regulation adopted a day before the seizure of Grace 1 as authorizing the Royal Marines to enforce the EU oil embargo against Syria – not US sanctions on exports of Iranian oil.

Tehran is not buying it, accusing the UK of “fabricated excuses.” Major General Mohammad Bagheri, chief of staff of the Iranian armed forces, has promised an unspecified “appropriate answer.”

Another British tanker, the Pacific Voyager, was apparently escorted by the frigate HMS Montrose on its way to the UAE port of Fujairah on Monday. British shipping in the Persian Gulf has taken notice.

The BP-operated tanker British Heritage was bound for Basra in Iraq, but made an abrupt U-turn in the Persian Gulf on July 6. It is currently anchored off the coast of Saudi Arabia, fearing a possible Iranian reprisal, Bloomberg reported citing anonymous sources.

It is worth remembering that Washington has accused Iran of being behind the mysterious attacks on two oil tankers in the Gulf of Oman, as well as two other vessels in the Persian Gulf, last month. Tehran denied the accusations, and the countries whose ships were damaged were likewise not convinced.

The Pentagon’s announcement it would “build a global consensus” against Tehran went largely unnoticed in the frenzy over Iran’s downing of a US spy drone, which seemed certain to trigger a war until US President Donald Trump called off a planned strike, citing concern for possible Iranian casualties.

What the recent tanker piracy and calls for a maritime coalition suggest, however, is that the “consensus” is being well and truly manufactured, and that war with Iran is just a matter of time.