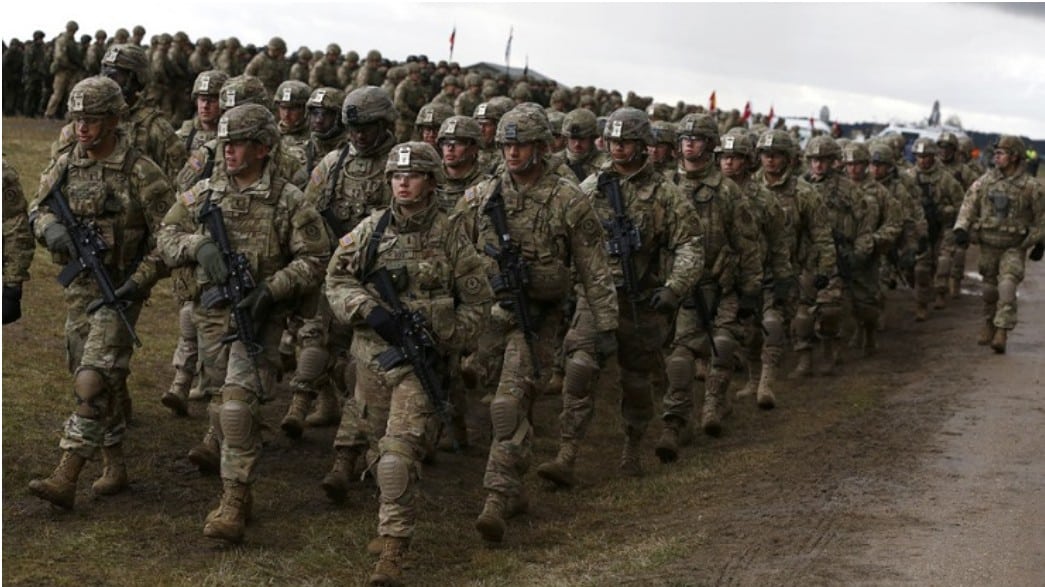 NEO was established and has been continually publishing since 1818

Little is spoken of today, particularly as Trump, Bolton and Pompeo are threatening war on three continents simultaneously, but the failure of diplomacy and the primacy of militarism. Problem is, those who drive these insane policies control and even own the “engines of reason and dissent.”

Eisenhower described this process as he saw it, universities “pimping” for militarists, congress bought, judges owned, as he left office. He never truly understood the extent of the problem as he himself was under the thumb of the Dulles boys, John Foster (Secretary of State) and Allen (CIA Director), formerly Adolf Hitler’s legal representatives on Wall Street prior to Pearl Harbor.

Trump simply inherited what he calls “the sewer” and has done exactly what Eisenhower did, surrounded himself with the worst of the worst, men like Bolton and Pompeo, “shills” for the military industrial complex and the “banksters” who have orchestrated wars for a thousand years.

Worse still, Trump’s son in law, Jared Kushner, has become the “dime store” von Ribbentrop of our time, settling the world’s affairs with an eye to personal enrichment and little concern for justice, human suffering or the wars his incompetence may lead to.

War for profit isn’t anything new and the American military industrial complex that failed to collapse as intended after the end of World War II is a major component in today’s ever maddening world. President Eisenhower warned of this in his 1961 farewell address:

“Crises there will continue to be. In meeting them, whether foreign or domestic, great or small, there is a recurring temptation to feel that some spectacular and costly action could become the miraculous solution to all current difficulties. A huge increase in newer elements of our defense; development of unrealistic programs to cure every ill in agriculture; a dramatic expansion in basic and applied research — these and many other possibilities, each possibly promising in itself, may be suggested as the only way to the road we wish to travel.

The record of many decades stands as proof that our people and their government have, in the main, understood these truths and have responded to them well, in the face of stress and threat. But threats, new in kind or degree, constantly arise.

IV. A vital element in keeping the peace is our military establishment. Our arms must be mighty, ready for instant action, so that no potential aggressor may be tempted to risk his own destruction.

Our military organization today bears little relation to that known by any of my predecessors in peacetime, or indeed by the fighting men of World War II or Korea.

Until the latest of our world conflicts, the United States had no armaments industry. American makers of plowshares could, with time and as required, make swords as well. But now we can no longer risk emergency improvisation of national defense; we have been compelled to create a permanent armaments industry of vast proportions. Added to this, three and a half million men and women are directly engaged in the defense establishment. We annually spend on military security more than the net income of all United States corporations.

This conjunction of an immense military establishment and a large arms industry is new in the American experience. The total influence — economic, political, even spiritual — is felt in every city, every State house, every office of the Federal government. We recognize the imperative need for this development. Yet we must not fail to comprehend its grave implications. Our toil, resources and livelihood are all involved; so is the very structure of our society.

In the councils of government, we must guard against the acquisition of unwarranted influence, whether sought or unsought, by the militaryindustrial complex. The potential for the disastrous rise of misplaced power exists and will persist.

We must never let the weight of this combination endanger our liberties or democratic processes. We should take nothing for granted. Only an alert and knowledgeable citizenry can compel the proper meshing of the huge industrial and military machinery of defense with our peaceful methods and goals, so that security and liberty may prosper together.

Akin to, and largely responsible for the sweeping changes in our industrial-military posture, has been the technological revolution during recent decades.

In this revolution, research has become central; it also becomes more formalized, complex, and costly. A steadily increasing share is conducted for, by, or at the direction of, the Federal government.

Today, the solitary inventor, tinkering in his shop, has been overshadowed by task forces of scientists in laboratories and testing fields. In the same fashion, the free university, historically the fountainhead of free ideas and scientific discovery, has experienced a revolution in the conduct of research. Partly because of the huge costs involved, a government contract becomes virtually a substitute for intellectual curiosity. For every old blackboard there are now hundreds of new electronic computers.

The prospect of domination of the nation’s scholars by Federal employment, project allocations, and the power of money is ever present and is gravely to be regarded.”

What “Ike” as we called him then was unaware of was the international nature of the military industrial complex as well. Did he choose to ignore the roles of Standard Oil of New Jersey, General Motors, Ford, Alcoa, Lockheed, Goodyear, Dupont and dozens of other American corporations in not only building the Third Reich but keeping its war machines going throughout the war?

Behind the corporations were the banks, Brown Brothers of New York, the Rothschild’s of London, powerful law firms, Dulles Brothers which included Eisenhower’s own CIA director and Secretary of State, all working for Hitler before the war and perhaps, more than perhaps, during.

Research available to military intelligence as early as 1949, clearly showed that the “ratlines” that sent Nazis to South America after the war had been sending war profits to American and British corporations throughout World War II, not just through Swiss banks but the Vatican as well.

Facilitating this treason on a massive scale was America’s OSS, precursor to the CIA and Britain’s SIS (Secret Intelligence Services) who continued to work closely with Nazi Germany’s Abwehr throughout the Cold War.

This continuation of Nazi influence in Washington and London led NATO to largely reflect the policies of Nazi Germany, building a world of totalitarian puppets and stripping the world bare.

Hitler’s domestic policies, however, were, for the “chosen people” at least, in this case ethnic Germans, far more beneficial than Hitler’s predecessors have chosen for the people of the US and Britain. Is it fair to call American and British leaders “predecessors” or “inheritors” of Adolf Hitler?

One needs only to listen to the racist and jingoistic rhetoric of Washington and London, the smears, the threats, the raving lunacy.

As London now has its own “populist” waiting in the wings, Boris Johnson, there to save the British people from the influx of refugees resulting from Britain’s own policies in the Middle East and Africa, one might feel history is actually being “recycled.”

Where Hitler had Mussolini, his inheritors now have Jail Bolsonaro of Brazil and a new military alliance of Israel, Saudi Arabia and the UAE.

The key, of course, is creating factionalism and fakery, even in the total absence of ideological conflict.

A closer examination of history shows the runup to August 1914, the engineering by the Warburgs, Shiffs and Rothschilds of the alliances needed to burn down the world.

At Versailles they built the framework for the next war and by the late 1920s had collapsed the world economy and began pouring cash into Europe’s fascists.

Of course, today’s universities, just as Eisenhower warned, would never allow the generations of the latter 20th century and beyond to gain the tools needed to secure a peaceful world order.

Minneapolis Police Arrest Trumpster for Attempted Murder of Thousands, Name Withheld While they Look for a Patsy