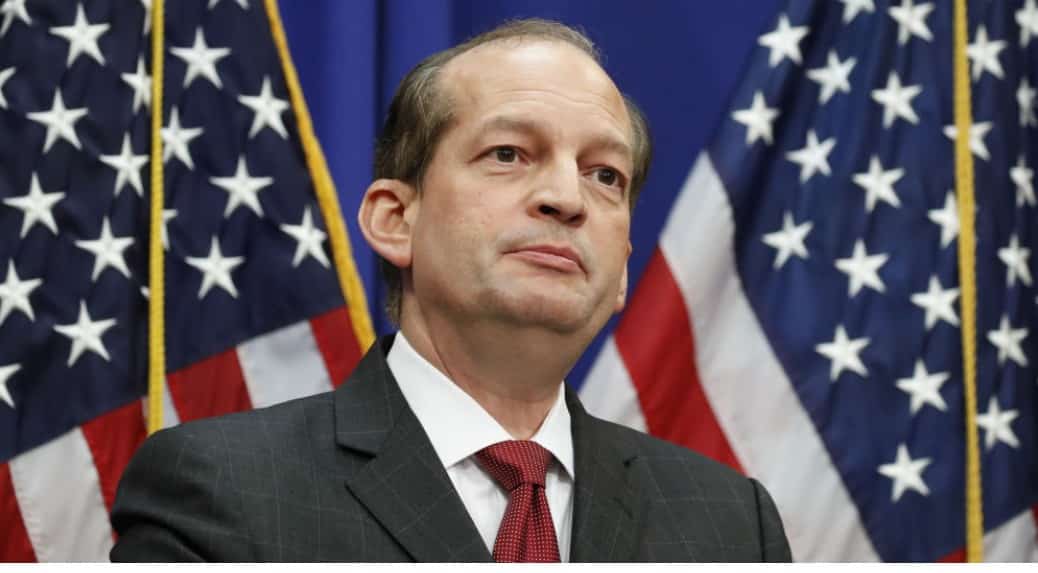 Editor’s note:  Acosta has repeatedly admitted that he let not only Epstein “off the hook” but failed to look at Wexner and many other AIPAC/ADL and “holocaust industry” types who were involved with Epstein.

Trying looking up Wexner, even try to find a photo, any of the Mega billionaires behind Epstein, who upon examination by the NY Times, has NO money of his own yet lives beyond any Saudi princeling.

Sputnik/Moscow: Earlier, following Sunday’s arrest of billionaire hedge fund manager Jeffrey Epstein on charges of sex trafficking and abuse of minors, lawmakers urged Acosta to resign over his alleged lenient treatment of Epstein during plea-bargaining negotiations in 2008, while Acosta was serving as US Attorney for Southern Florida.

US Labour Secretary Alexander Acosta will be resigning from office, President Donald Trump told reporters on Friday. “I hate to see this happen,” Trump said, adding that Acosta had done a “great” job as labour secretary.

Acosta, who appeared alongside Trump, said he had “called the president this morning and told him that I thought the right thing was to step aside.”

“My point here today is we have an amazing economy and the focus needs to be on…job creation,” Acosta added.

The secretary’s resignation will step into effect in seven days.

Criticism of Acosta began in late 2018, when the Miami Herald published a groundbreaking investigation on the Epstein pedophilia affair in which it accused the official of treating Epstein leniently in 2008 in the plea deal agreement which allowed the billionaire to serve just a year in prison and another year under house arrest despite FBI allegations of sexual abuse and trafficking of nearly three dozen young women and girls as young as 12.

According to the Herald, Acosta, who was serving as US Attorney for Southern Florida at the time, “didn’t just buckle under pressure from Epstein’s lawyers,” but “worked with them to contain the case -even as the FBI was uncovering evidence of a wider sex trafficking operation.”

On Monday, Democratic House Speaker Nancy Pelosi called on Acosta to resign, calling the 2008 plea deal with Epstein an “unconscionable agreement” and accusing Trump of knowing about Acosta’s questionable past when appointing him to office. On Wednesday, Acosta defended his role in the Epstein plea bargain, saying the goal was to put Epstein behind bars and ensure that he registered as a sex offender and provided his victims with the means to seek restitution.

Epstein was arrested at his New York home on Sunday. On Monday, authorities formally charged him with sex trafficking and conspiracy over the alleged abuse of dozens of underage girls a decade earlier. According to prosecutors, hundreds and possibly thousands of “sexually suggestives” photographs of nude underage girls were also seized from Epstein’s estate upon his arrest. The billionaire has pled ‘not guilty’ to the charges.

Most, but not all of these individuals cut their ties with Epstein following his 2008 imprisonment. On Monday, a Clinton spokesman said the former presient “knows nothing” about the “terrible crimes” linked to Epstein, despite evidence that he had flown aboard the billionaire’s plane, nicknamed the “Lolita Express”, on multiple occasions in the early 2000s.