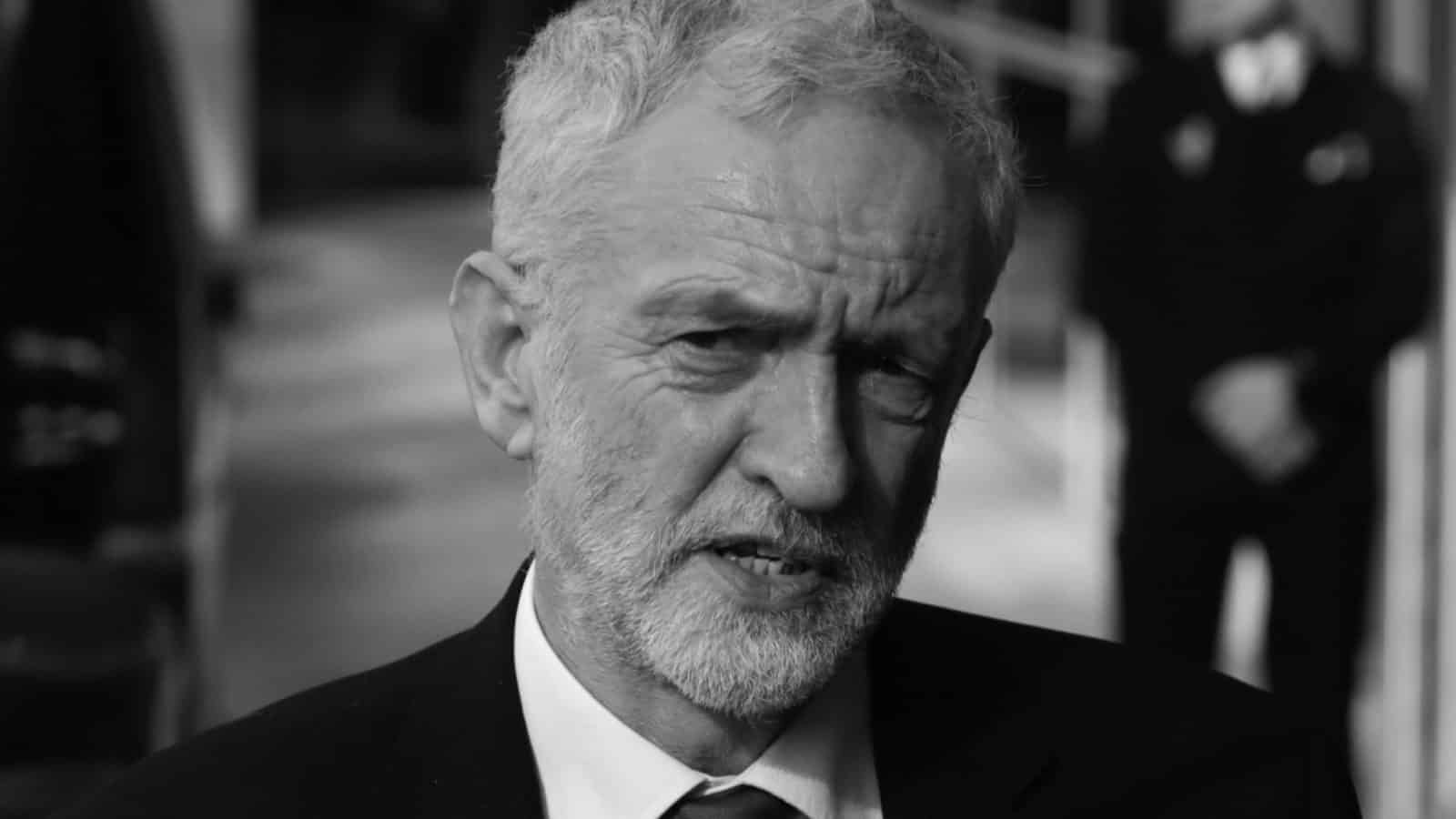 Labour MP Chris Williamson was suspended from the party in February for saying Labour had “given too much ground” over anti-Semitism complaints. He was recently re-admitted to the party but suspended again two days later due to the backlash orchestrated by Zionist stooges. The party’s Disputes Committee has decided to refer his case to a new panel for consideration.

And so the farce continues. It’s the latest round in the unpleasant war waged on the Labour Party and its leader, Jeremy Corbyn, by the Zio-Inquisition that stalks the corridors of power at Westminster.

Williamson was originally suspended from the Labour Party in February after video footage showed him saying: “The party that’s done more to stand up to racism is now being demonised as a racist, bigoted party. I’ve got to say I think our party’s response has been partly responsible for that because in my opinion… we’ve backed off far too much, we’ve given too much ground, we’ve been too apologetic.”

Noam Chomsky, Norman Finkelstein and over 100 other high-profile maverick Jews (‘maverick’ in the sense that they don’t see eye to eye with ‘official’ Jewish mouthpieces like the Board of Deputies and the Jewish Leadership Council) sent a letter to the Guardian:

“We the undersigned, all Jews, are writing in support of Chris Williamson and to register our dismay at the recent letter organised by Tom Watson [Labour’s deputy leader], and signed by parliamentary Labour party and House of Lords members, calling for his suspension……”

The Guardian ‘pulled’ the letter almost as soon as it was published after caving in to an immediate media-blitz by the ‘usual suspects’.

Replying to questions Professor Chomsky said: “The way charges of anti-semitism are being used in Britain to undermine the Corbyn-led Labour Party is not only a disgrace but also … an insult to the memory of the victims of the Holocaust.

“The charges against Chris Williamson are a case in point. There is nothing even remotely anti-semitic in his statement that Labour has ‘given too much ground’ and been ‘too apologetic’ in defending its record of addressing ‘the scourge of anti-semitism’ beyond that of any other party, as he himself had done, on public platforms and in the streets.”

The Guardian’s craven tomfoolery was quickly followed by more from the BBC, which screened a Panorama programme claiming to investigate anti-Semitism in the Labour Party. It was unbalanced to the point of indecency and interviewed mainly young, disgruntled Jewish members and staffers many of whom were (or had been) on the party’s disputes team. Why such a disproportionate number are in key judgemental positions wasn’t explained. If I were a party member suspended for an alleged anti-Semitic remark I’m not sure I’d wish my case to be handled by Jewish investigators no matter how charming and polite.

The party’s leadership was blamed for not sorting out the way complaints were processed then blamed again if it dared get involved. When the leader’s office suggested a review of the process, which is obviously needed, that was wrong too. The programme was laced with sob stories from those who had been on the receiving end of anti-Semitic abuse or just saddened by racist slurs flying around. But we heard none of the distressing accounts of those who have been falsely accused of anti-Semitism; they weren’t interviewed. So the programme was silent on the gratuitous wrecking of political lives, the public humiliation, the irreparable damage to reputations, the paralysis, and the public disservice caused by the Inquisition’s troublemakers on the prod. Nothing either about whether these false accusers are ever disciplined.

There was much talk of tropes and conspiracy theories but no attempt by Panorama to establish whether certain remarks branded anti-Semitic aren’t simply words of truth. Unquestioning acceptance of the anti-Semitism narrative as defined by the Jewish lobby was shocking but not surprising given that the BBC has pro-Israel form. That isn’t to say the Labour Party is blameless. I looked into two cases myself and was appalled by the time it took for the accused to get a hearing and how their health and work suffered while needlessly under the cosh. It’s as if Labour’s lackadaisical process is designed to do maximum damage to all concerned. And there’s no doubt that the huge influx of new members when Jeremy Corbyn became leader brought a number of loonies and rednecks into the party.

But who’s to say that some extremists weren’t planted by the groups determined to bring Corbyn down? After all, the ‘get Corbyn’ campaign reached new levels of nastiness after Mark Regev took over as Israeli ambassador to London in April 2016, not long after Corbyn rocketed to political stardom and seemed destined to become next prime minister. Regev was formerly Netanyahu’s chief spokesman and the mastermind behind Israel’s propaganda and dirty tricks programmes. Was his posting to London after Corbyn’s leadership election just coincidence?

Israel insider Miko Peled warned two years ago that Israel was going to “pull all the stops, they are going to smear, they are going to try anything they can to stop Corbyn”, and the reason anti-Semitism is used is because they have no other argument. This has certainly come true with Jeremy Corbyn under vicious, sustained attack.

Miko, in my interview with him last year, underlined the need for activists to shift up a gear and accelerate from solidarity to full-on resistance – in effect create a BDS Mk2, on steroids. This would involve treating Zionism and those who promote or support it with far less tolerance. As Miko said on another occasion, “If opposing Israel is anti-Semitism then what do you call supporting a state that has been engaged in brutal ethnic cleansing for seven decades?”

Indeed. And what do you call people in public life who adore and defend that state and intimidate anyone who voices disapproval?

Hugh Tomlinson QC warned that if a public authority adopts the IHRA (International Holocaust Remembrance Alliance) definition of anti-Semitism then it must interpret it in a way that’s consistent with the organisation’s statutory obligations and doesn’t cut across the European Convention on Human Rights, which provides for freedom of expression and freedom of assembly. Freedom of expression applies not only to information and ideas that are favourably received or regarded as inoffensive, but also to those that “offend, shock or disturb the State or any sector of the population”. Unless, of course, they amount to a call for violence, hatred or intolerance.

And retired Lord Justice of Appeal, Sir Stephen Sedley, pointed out that the 1986 Education Act established an individual right of free expression in all higher education institutions “which cannot be cut back by governmental policies”.

So according to top legal opinion the IHRA definition does not make calling Israel an apartheid state or advocating boycott, divestment or sanctions (BDS) against Israel anti-Semitic. Also, Article 19 of the Universal Declaration of Human Rights includes “the freedom to hold opinions without interference and to seek, receive and impart information and ideas through any media and regardless of frontiers”.

Are Tom Watson and other parliamentary Labour Party members not aware of these caveats? The day can’t be far off when somebody tests all this anti-Semitism aggravation in the courts.

Corbyn’s enemies cannot escape the undeniable truth about Israel. Corbyn and his allies might allow them off the hook but civil society, as it gathers strength, won’t. Those enemies include deputy leader Tom Watson, who has declared himself “a proud and long-standing supporter of Labour Friends of Israel”. This admirer of the Jewish state has just told the BBC: “I am not going to turn a blind eye to anti-Jewish racism, I’m going to call it out day in day out until action is taken.” If only Watson was equally persevering in calling out Jewish anti-Palestinianism.

Didn’t this sad stooge read the United Nations Economic and Social Commission for Western Asia (ESCWA) recent report establishing that Israel, beyond a shadow of a doubt, is a vile apartheid regime? Such was the fuss kicked up when it appeared that it has been suppressed and withdrawn from UN websites.

The authors urged the United Nations to fulfill its international responsibilities in relation to international law and the rights of the Palestinian people as a matter of urgency, for two reasons:

“First, the situation addressed in the report is ongoing….. In the case of Israel-Palestine, any delay compounds the crime by prolonging the subjugation of Palestinians to the active practice of apartheid by Israel. Prompt action is accordingly imperative….

“Secondly…. since the 1970s, when the international campaign to oppose apartheid in southern Africa gathered momentum, apartheid has been considered in the annals of the United Nations and world public opinion to be second only to genocide in the hierarchy of criminality.

“This report accordingly recommends that the international community act immediately, without waiting for a more formal pronouncement regarding the culpability of the State of Israel, its Government and its officials for the commission of the crime of apartheid….

“The prohibition of apartheid is considered ‘jus cogens’ in international customary law.

No wonder it was hushed up.

Conveniently, Israel has put the question of whether it is a racist endeavour beyond doubt by introducing its nation state laws a year ago. Even some Knesset members call it apartheid.

So the Labour Party leadership has plenty of live ammunition. Why don’t they use it? When elected leader nearly four years ago Corbyn was handed a stunning opportunity to reduce the Israel lobby’s influence to sensible and respectful proportions and he’s blown it, giving too much ground and being too apologetic, as Williamson says.