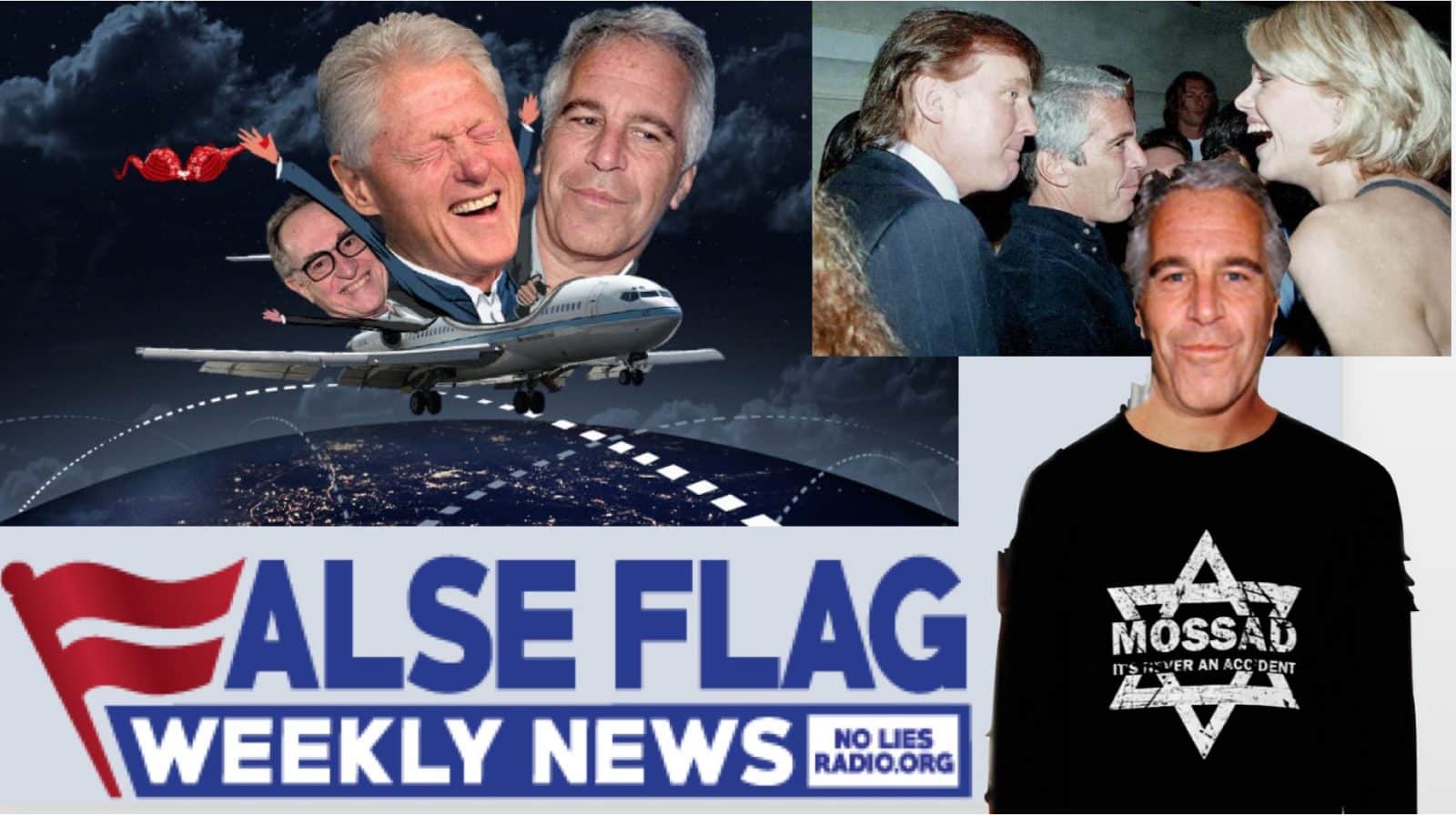 Watch False Flag Weekly News above; click HERE for links to the stories we covered, and HERE to help keep us going.

Today’s FFWN may be the best summary of the Jeffrey Epstein affair, and its historical context, that you’ll find anywhere. Below is another very good one.

Rothschild vs Trump. Will the new entry in the updated Jewish bible be Book of Trump or Book of Rothschild? The Adelsons are praying for the Book of Trump.

“Would it be too much to pray for a day when the Bible gets a ‘Book of Trump’, much like it has a ‘Book of Esther’ celebrating the deliverance of the Jews from ancient Persia?” [Miriam] Adelson asked. (Jerusalem Post)

It makes one’s understanding of Trump much less of a puzzle if one sees him as a crypto-Jew and, by means of that disguise, a very big big-shot of the Jews — like his father, Frederick CHRIST Trump Sr. The evidence in brief: Frederick Christ Trump Jr, Donald’s elder brother who drank himself to death at an early age, joined a Jewish fraternity at Lehigh University, Sigma Alpha Mu, and told his fellow Sammies that, despite the name, his father was actually a German Jew. Some of those Sammies told the New York Times about it, as we learn from its background report on the new president concerning his late brother. Wikipedia mentions that the father, despite his seeming gentileness was widely taken to be a Jew because of his large benefactions to Jewish religious education in Israel and his wide support of Jewish charities. Both husband and wife died in Jewish nursing homes. This sounds like a would-be macher (yiddish for big mover and shaker) crypto-Jew. To what end? Some sort of service to Jews that would be better done in goy-guise. Such as heading a manifestly anti-Jewish organization, such as the KKK, as seversl other crypto-Jews have done. During the campaign an NYT clipping from the 20s surfaced for a day, and was then quickly dropped by the supposedly hostile Jewish-controlled media. Frederick Trump, the head of the Bayside KKK, had been arrested in a riot. So dedicated a Jew would marry a Jew or have her convert (as did Lord Rothschild’s mother). The Trump family documentation has been fiddled with, as one would expect from the “Christ” middle name. Trump’s mother’s records have been so muddied that some accounts lead to the inference that she was her own mother. Two of Trump’s wives and possibly all three are Jews. Four of Trump’s children and possibly all five were born Jews, and all the adult ones have Jewish partners. Most notable is Ivanka, who pretended to convert to marry Kushner — to keep heritage Americans fooled.

That Trump is a Jew in disguise who intensely identifies with the role clarifies otherwise puzzling policies. From day one Trump has done all he can for Jews, be it the Goldman Sachs appointments or war or virtual war via sanctions on Syria, Hezbollah and Iran. Trump has done the minimum for heritage Americans. The Wall is nowhere to be seen. It’s not five-dimensional chess. It’s someone who intensely identifies as a Jew and pretends to be a heritage American continuing his family tradition of service to Jews through crypsis.

Ultra-Zionism is now Trump’s undoing. To be the biggest macher in Jew history Trump is doing everything he can think of for Israel. The embassy move. Golan. The Deal of the Century. The threat of sanctioning Europe. And he’s working at the obliteration of Iran.

Trump, from the beginning of his campaign has had Iran in his sights since it is the key force opposing Israel, and he has focused on ending American commitment to the nuclear treaty. The Rothschilds, through their Economist mouthpiece, have strenuously opposed Trump’s scrapping of the accord. What they feared has now come to pass and they are really, really annoyed. Funny how Lord R’s son was once dating the Trump bimbo. It’s no coincidence the viral bimbo-snub was by Rothschild servitors Lagarde, May, Macron and Trudeau.

Here’s another thrust from R.

“Britain’s man in the the US says Trump is ‘inept’: Leaked secret cables from ambassador say the President is ‘uniquely dysfunctional and his career could end in disgrace'”

Leaked. Oh dear. And it just happens that the R-tentacle in DC foresees disgrace. Wonder if that goes beyond pussy grabbing. Must do. Epstein has just been arrested. Trump is known to have traveled on the Lolita Express at least once. What about leaked Mossad films? Katie J saysit was all openly being filmed. It was part of the excitement.

Hitler expressed in his memoirs the view that behind the Zionist wish for a Jewish homeland was the aim of conferring sovereign immunity on a criminal tribe. There are those who say that Israel’s Mossad is actually a private army at the disposal of the Rothschilds, meaning that in a contest of wills between the Rothschilds and the Israeli government, the private Rothschilds would command Mossad loyalty. The head of the Rothschild clan was after all the private individual to whom the Balfour declaration was addressed.

Epstein is a Potemkin ‘billionaire’. There is no credible normal accounting for his apparent wealth, of which the source and amount are both suspect. So his sex (and child sacrifice?) retreats must be a Mossad blackmail operation — or, for insiders, a means of generating mutual trust through mutual blackmailability. Could this arrest be the Rothschilds sacrificing Epstein, one of their own, a major resource? Some days before the arrest a federal appeals court in Florida ordered the unsealing of 2000 pages of documents pertaining to his case. He could have scooted to Israel where state policy forbids the extradition of Jews, but he continued to hover about the scenes of his ugly crimes. Did he think he was invulnerable — or is it his job is to confess and take Trump down with him in a plea bargain?

Read the whole article at http://www.twf.org/News/Y2019/0711-TrumpRothschild.html