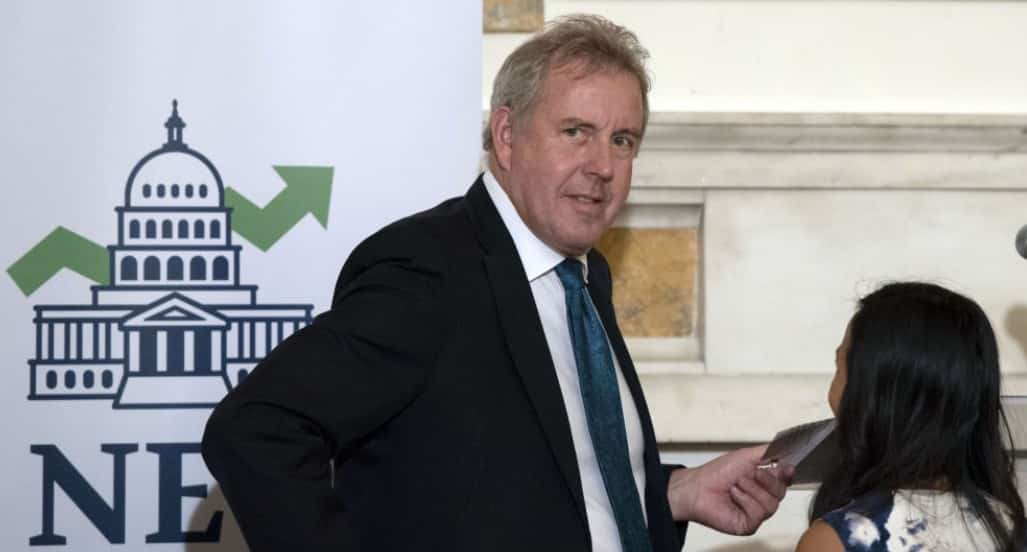 On 12 July UK Metropolitan Police opened a probe into the leak of excerpts from confidential cables that UK Ambassador Kim Darroch had sent to London in which he described the White House as “uniquely dysfunctional” and described US President Donald Trump as “inept, insecure and incompetent.”

Britain’s ambassador to Washington Sir Kim Durroch believed US President Donald Trump pulled out of the landmark Iran nuclear deal for “personality reasons”, because it was associated with his predecessor in the Oval Office, newly-leaked memos seen Saturday night by the Mail On Sunday claim.

“The administration is set upon an act of diplomatic vandalism, seemingly for ideological and personality reasons – it was Obama’s deal,” ambassador Darroch wrote in a diplomatic cable in May 2018.

According to the top secret “diptel” – or diplomatic telegram, the UK envoy had suggested to Downing Street that the US President wanted to ditch the deal because it had been brokered by his predecessor Barrack Obama.

The newly-leaked Iran memo was sent by the envoy in May 2018, after Boris Johnson (who was then Foreign Secretary) had been sent to meet up with President Donald Trump in a bid to dissuade him against pulling out of the Iran nuclear deal, writes MailOnline.

In a cable sent afterwards, UK Ambassador Darroch claimed the US President’s team was split over its decision on the deal, blasted the White House for lacking a long-term strategy.

According to the leaked cable, Sir Kim told Boris Johnson:

“The outcome illustrated the paradox of this White House”. “You got exceptional access, seeing everyone short of the president; but on the substance, the administration is set upon an act of diplomatic vandalism, seemingly for ideological and personality reasons – it was Obama’s deal.”

The envoy also suggested the White House lacked a “day-after” strategy on what the next steps should be after withdrawing from the Joint Comprehensive Plan of Action, as the deal was called.

The cable was part of a second batch of leaked memos published by the Mail on Sunday, the first of which led to the resignation of Darroch on 10 July.

A first batch of bombshell leaked memos by the UK envoy last weekend caused major turmoil between the UK and US.

In the cables, which were first published by the Mail on Sunday newspaper on 7 June, Sir Kim Darroch had described the US President as “inept”, “insecure”, and “incompetent” in messages sent to London, adding that Trump was “uniquely dysfunctional and his career could end in disgrace”.

This prompted Donald Trump to burst out in a spate of tweets, branding the ambassador a “pompous fool” whom he would no longer deal with. He also put all the blame for the mess caused by the leak on outgoing Prime Minister Theresa May.

​”The good news for the wonderful United Kingdom is that they will soon have a new Prime Minister”, he tweeted on Monday.

The UK ambassador resigned on Wednesday, saying it was “impossible” to do his job.

As the UK government launched an investigation into the leaks, police are also looking into a potential breach of the Official Secrets Act; local media reported Sunday that the suspect has been identified, yet not named by UK police.

Back in 2015, the US, China, Britain, France, Russia and Germany signed a deal with Iran to limit its nuclear programme in exchange for a partial removal of international economic sanctions, with then-US president Barrack Obama helping broker the arrangement between Tehran and the West.

Donald Trump had long been critical of the deal, claiming it had stopped short of curbing Iran’s ballistic missile programme, and pulled the US out of it on 8 May 2018.

Trump completely lacked an exit strategy when he pulled out of the Iran nuclear deal and made the decision out of pure animosity towards his predecessor, the ex-UK ambassador to the US said, according to a new embarrassing leak.

Desperate to save the Joint Comprehensive Plan of Action (JCPOA), then-UK Foreign Secretary Boris Johnson flew to the US in May 2018 to persuade President Donald Trump to abide by the accord.

Despite intense negotiations at the White House with Trump’s closest aides that lasted for 26 hours, Johnson returned empty-handed, simply because Trump wanted to spite Barack Obama for negotiating the agreement, the UK’s former ambassador to the US, Sir Kim Darroch, told 10 Downing Street, according to a leaked diplomatic cable published by the Mail on Sunday.

The Administration is set upon an act of diplomatic vandalism, seemingly for ideological and personality reasons – it was Obama’s deal.

The cable sent out on May 8 last year also claimed that the White House had lacked any strategy on how to handle the withdrawal and suggested that there were strong disagreements among Trump’s closest advisers.

They can’t articulate any ‘day-after’ strategy; and contacts with State Department this morning suggest no sort of plan for reaching out to partners and allies, whether in Europe or the region.

In another cable sent out the same day, Sir Darroch blamed Trump for following the line of National Security Advisor John Bolton, who promulgated withdrawal from the deal and the re-imposition of sanctions.

The British tabloid went on to release the second batch of Sir Darroch’s wires despite the warning by the Metropolitan Police not to publish the government leaks. The initial publication of cables last week caused a diplomatic scandal between Washington and the UK.

It resulted in Sir Darroch’s resignation on Wednesday, after Trump unleashed a salvo of attacks against the diplomat, who described his administration as “dysfunctional” and “inept.” The Metropolitan Police’s Counter Terrorism Command is now investigating the source of the leak.