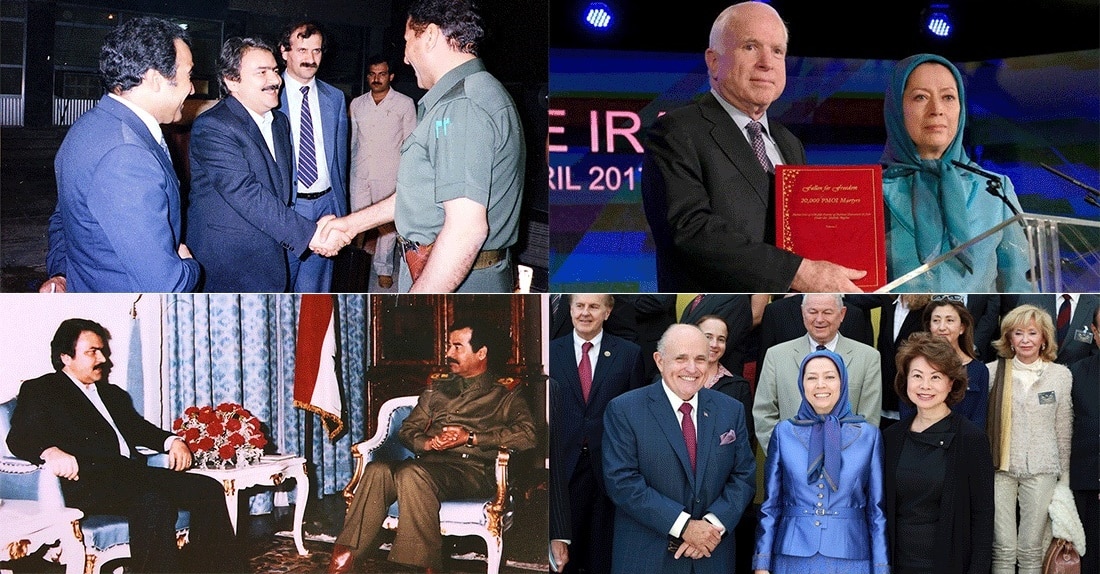 MEK is not a valid alternative

[ Editor’s Note: VT has known and worked with the Habilian Association since we learned about them. We were shocked to discover that they represented not only 16,000 terror victim families, but also had a corporate news blackout on their existence. Why?

We quickly deduced that it had something to do with the total victim numbers running at over five 9-11s; but even worse, twelve thousand of them were murdered by the MEK, which has been supported by both Israel and the US without any heroic Western journalism breaking the story.

The US Congress is basically a booster club for this terrorist organization, while our government tells us that it is fighting terrorism. We feel that since nothing was done to cut MEK off at the knees, it resulted in the expansion of proxy terrorism to a new level in the Syrian war.

VT had been warning people in high places that, if this was not reined in and stopped, it would grow and grow; and once again we were proven right. But alternately exploiting terrorism, then fighting and engaging it, was discovered to be a “two fer” by the defense and security establishment, so they are continuing to milk it for all they can get; and Congress, both sides, are on the gravy train, all pretending to be protecting us.

It is a perversion on a scale of claiming that Epstein helped many young girls start modeling careers and the people wanting to take him down are just jealous over his success.

Like many kinds of serious illness, if it is not effectively treated, it spreads. That’s where we are now. With Epstein and Wexner, the breadcrumb trail goes through the Jewish Lobby and back to Israel and its Intel agency involvement in running a major compromising operation that destroyed a lot of lives.

We are now going to see what kind of society we really live in. Who will care? I fear that not enough will.

For one clue, can anyone name a single religious institution that has demanded that a special investigation branch be formed to dig into why this was allowed to go on so long, since our top Intelligence and security people, with all of their surveillance, must have known?

Those who are supposed to protect us are “aiders and abettors”, if the record shows that it was allowed to go on because it was “too politically sensitive”… Jim W. Dean ]

Exploiting Washington’s hostile policy toward Tehran, the Mojahedin-e Khalq organization (MEK) posit themselves as the alternative to the current government of Iran. To achieve that goal, they claim they have the support of a majority of Iranians.

This claim is much disputed by academics and other specialists on Iran, who assert that in fact, the MEK has little support among Iranians. They argue that the Mojahedin’s activities since the group’s leadership fled from Iran in 1981, particularly their alliance with Iraq and the group’s internal oppression, have discredited them among the Iranian politics.

Think of Iranians living in the U.S. According to a 2018 poll among Iranian Americans by the Public Affairs Alliance of Iranian Americans (PAAIA), only 6 percent said they supported the MEK as a legitimate alternative to the current government in Iran.

This mirrors results of the organization’s survey at the previous year (2017) regarding favorability of Maryam Rajavi, leader of the MEK, which had shown that only 7% had a favorable view of her.

The MEK’s unpopularity in Iranian-American community is admitted by John Limbert, former Deputy Assistant Secretary of State for Iran. In an article published in The American Prospect on June 5, 2019, Limbert has written about his recent lecture on the group and its influence to graduates of three of the world’s best universities. “… All of the Iranian Americans at the meeting, however, knew the group well and detested it.

They knew its murderous history in Iran.” wrote Limbert. “they knew that a MEK-ruled Iran would bring them all the horrors of Stalinism—gulags, one-man (or -woman) rule, confiscations, and executions for being a member of the wrong social class.”

In its 1994 report about the group, the US Department of State emphasizes that the MEK would not be an authentic alternative to the Islamic Republic:

Shunned by most Iranians and fundamentally undemocratic, the Mojahedin-e Khalq are not a viable alternative to the current government of Iran.

Before that, in 1992, the then Assistant Secretary of State Robert Pelletreau through a written response to a subcommittee question about the MEK has referred to the group’s weak position among the Iranians:

The People’s Mojahedin Organization does not represent a significant political force among Iranians, partly because of its close links to the Iraqi Government.

The United States first placed the MEK on the Foreign Terrorist Organization list when the list was established in 1997. On its Background Information Appendix on the listed terrorist groups titled “Patterns of Global Terrorism: 1997”, the State Department confirmed that the group directs a worldwide campaign against the Iranian government that stresses propaganda and “occasionally uses terrorist violence.” The MEK’s stance among Iranians was not referred to in this report.

In 2009, RAND Corporation, an American think tank, released a Secretary of Defense’s sponsored investigation centering on the MEK titled The Mujahedin-e Khalq in Iraq: A Policy Conundrum, in which the MEK’s unpopularity among Iranians was reflected:

Jeremiah Goulka, former RAND Corporation’s analyst who was the leading writer of the 2009 report, later explained the cause of this unpopularity:

Once upon a time, the MEK did enjoy some measure of popular support in Iran. But after getting shoved aside by Ayatollah Ruhollah Khomeini’s party after the 1979 Iranian Revolution, the MEK spent the next two decades launching terrorist attacks against the new regime and its military, harming bystanders in several instances.

The MEK joined sides with Saddam Hussein in the Iran-Iraq War (1980-1988), moving to camps in Iraq in 1986 and fighting against Iranian conscripts.

Frustrated that Saddam failed to install it in power in Tehran by the end of the war, the MEK attempted its own invasion of Iran (using more of Saddam Hussein’s military munificence), resulting in the death of thousands of its members. These acts destroyed the MEK’s credibility among Iranians.

In 2011, at the height of an aggressive and well-funded lobbying campaign supported by a bipartisan cast of high-profile former public officials to remove the MEK from the State Department’s list of foreign terrorist organizations, 37 leading Iran scholars signed a letter, published in the Financial Times, that warned against decision to delist the MEK.

It was insisted in the letter that the MEK has “no political base” inside Iran and “no genuine support” among the Iranian population. Gary Sick, one of the signatories of that letter, who served on the National Security Council staff under Presidents Ford, Carter, and Reagan, described the MEK’s support inside Iran “very, very limited.”

After the State department’s announcement in September 2012 that the group would be removed from the terrorist list, a senior state department official asserts that the Department does not consider the MEK as a viable opposition for the Iranian Government:

I want to be very clear about this. We do not see the MEK as a viable opposition or democratic opposition movement. We have no evidence and we have no confidence that the MEK is an organization that could promote the democratic values that we would like to see in Iran. There is nothing in the way they govern themselves that would suggest they’re interested in adopting democratic principles….

Michael Rubin, the resident scholar at the American Enterprise Institute, has admitted public hatred in Iran from the MEK, based on his direct exchange with Iranian people. Rubin, who, according to himself, has spent seven months in the Islamic Republic of Iran for completing his Ph.D. dissertation, wrote in The National Interest that “absolute hatred of the Mojahedin e-Khalq” was only one item that all Iranians agree on it.

Iranians’ public hatred toward the MEK has been stated by John Limbert, too: “By all reports, much of Iran’s population—whatever its view of the Islamic Republic—shares this deep hatred of the MEK. Most Iranians are not deceived by its claims of being democratic. They know its history.”

As stated above, the MEK’s unpopularity among Iranians is not something that is unknown to the US officials. They know very well how despised the MEK is in Iran and has no support as an opposition force.

They couldn’t have any illusion about the MEK’s claims of having a popular base to play the role of an alternative to the current government of Iran. So, why the US officials continue to support them? Trita Parsi, President of the National Iranian American Council (NIAC), answers to this question:

Unlike other Iranian opposition groups, however, the MEK can mount military operations. Its members are experienced in sabotage, assassinations, and terrorism, as well as in guerrilla and conventional warfare. These are not qualities that lend themselves to any project of democratization, but are extremely useful if the strategic objective is to cause either regime change (by invasion) or regime collapse (by destabilization).

In 2012, Trita Parsi’s organization warned that the MEK was an Iranian version of the Iraqi National Congress, the opposition-in-exile to Saddam Hussein led by Ahmed Chalabi, which the neoconservatives in Washington tirelessly promoted in the early 2000s to provide grounds for going to war in Iraq.

The MEK calculates that by provoking a war between the U.S. and Iran, a goal that this group is obviously looking for, it would move into the wreckage and pick up the pieces.

A U.S.-Iran war, aside from inflicting heavy damage on Iran, would also involve Americans in yet another fiasco in the Middle East. According to Limbert, “We [Americans] would again find ourselves in a quagmire that would make Iraq look simple. We should reject the self-serving assumption that military action against Iran will be easy and without cost. It will be neither.”