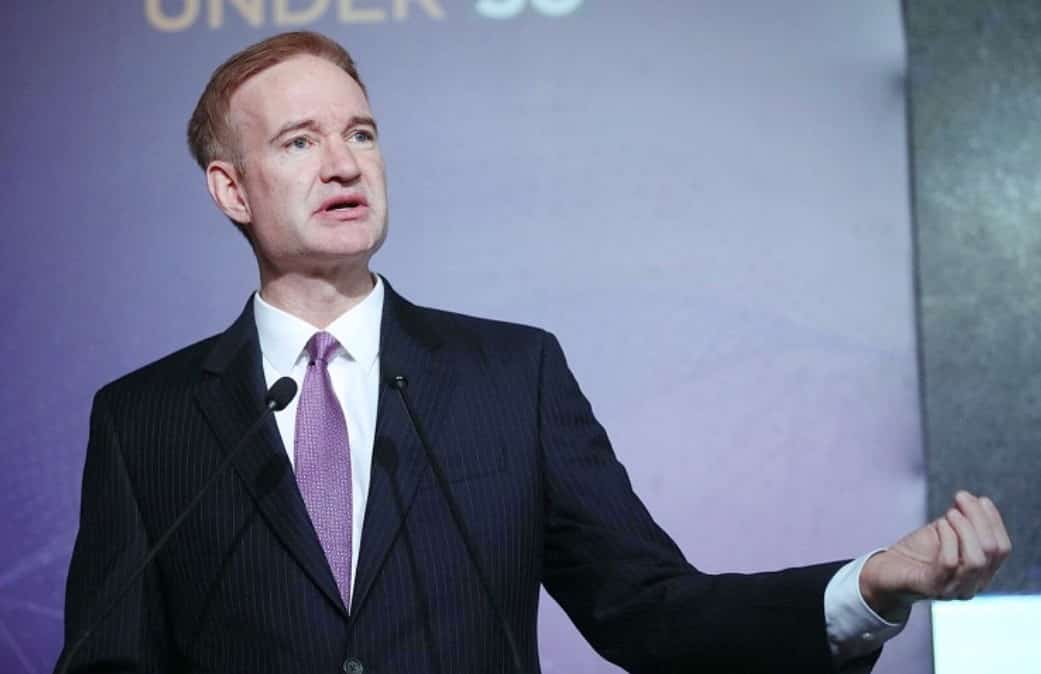 What is going on? Is Dr. Michael Carpenter a mini-John Bolton in the making?

The timing of the recent protests was to be expected. They sound as if Joe Biden is about ready to use Georgia for his “doomed” presidential campaign in much in the same vein as John McCain attempted to do back in August 2008. The explanation of what happened during the protests depends on who you are listening to, and how you well you are able to separate fact from the carefully-crafted rhetoric.

One of the first things to do when evaluating the situation is to read some of the English language news sites, especially those heavily funded by NED … or the “National Endowment for Destabilization” as it should be called, and other likeminded organisations which operate under the guise of spreading democracy in Georgia.

You will naturally find op eds there, albeit with disclaimers such as Russian Soft Power Fails, Pointing the Way to a New Georgian Consensus, but consider the clients of the author; these appear to be biased. Each one reads as if drafted by VOA or other such mouthpieces of US policy, while their delivery mechanism purports to be neutral and professional.

Such articles present those who support traditional Georgian values including the Georgian Orthodox Church hierarchs and their anti-liberal followers, as a “domestic constituency”, described as “a growing and active minority within the Georgian electorate.”

The agenda becomes clear when a comparison is made: “regardless of that debate about the past, the Georgian Dream (Party) government has been drifting more recently towards the anti-liberal, religious program advocated by Russian propaganda.”

This is pretty heavy stuff – the writer makes a BIG deal out of “close ties” between the ruling government and Russia, and its efforts to seek a balanced policy between the West and Russia and improve relations after the 2008 Georgian Russian war. He presents these as being anti-liberal, and part of a religious agenda, to imply that Georgia is both a Russian vassal state and going backwards, despite the nature of the current US government and its base of support.

The purpose of these articles is demonstrated by allegations that the unleashing of “indiscriminate” violence on the mostly peaceful crowd was so sudden that a legitimate question is raised whether Georgia’s informal ruler, Bidzina Ivanishvili, received an instruction from the offended Putin to take “severe measures.”

We should not the use of the word “mostly” here. This is a backhanded acknowledgement of the reality that the well paid rioters who were attacking police actually started out in Saakashvili era Patriot Camps, participated as young teens, and got their first taste of blood in the pro-democracy protests back in May of 2011.

Civil Georgia, where you will find this, does not hide its funding source, NED, and also states that “opinion pages” reflect the opinions of the author, “which may not necessarily represent the editorial views of Civil.ge, but which we consider are to our readers’ benefit.” However Civil Georgia will not accept opinion pieces from those who are not marching in step with its not-so-hidden agenda.

It is becoming clear that what is transpiring in Georgia is not a home grown occurrence, as previously described in this journal. The succession of staged events there, including the Gay Pride marches, are being managed from outside.

It also comes as no surprise to see that Salome Zurabishvili, the figurehead president of Georgia, is part of the concerted effort to blame Russia for what is transpiring. The President of Georgia stating that Russia is its enemy comes VERY close to stating that Georgia wants a war with Russia—and Zurabishvili, a former French Diplomat, knows that.

Zurabishvili stated on her Facebook page that Russia is “our enemy and occupier,” and that the“fifth column” controlled by it may be perhaps more dangerous today than open aggression. She also recently stated that “that split in the country and in society and all the domestic strife plays into the hands of no one but Russia.”

Why would she take the opposite position to the political party which put her into power, the Georgian Dream? She was born in Paris, worked in the French Foreign Ministry, worked in NATO, and then joined American-supported Saakashvili, who made her Minister of Foreign Affairs of Georgia. There was much debate over how she came to be the Georgian Dream presidential candidate in the first place, with a strong suspicion that she had been forced upon the ruling party by the US. So whose side is the President of Georgia, representative of the Georgian State, actually on?

Players in a New Great Game

In response to some of the protest slogans, and the comments of the Georgian president, , Russian PM Dmitry Medvedev promprlt responded, as reported by Russian Channel 1:

“I think these statements are extremely unprofessional, and show how the Georgian president may not be up-to-date on the situation in Georgia, or is intentionally distorting the situation. In Georgia, various political events are happening that are related to domestic political struggles between the radical opposition, (those holdovers from Saakashvili’s regime) and the forces now in power (Georgian Dream). Any attempt to blame Russia for the situation is a distortion of the actual situation, and it is most unfortunate that the Georgian president is involved in this effort. But we will hope that the Georgian people will figure everything out.”

Maybe they will, but this is easier said than done, as the media and TV stations are diverting attention to Russia as the culprit, as are Facebook and other social media outlets. It is no wonder that Russia has acted swiftly, based on the recommendation of the Russian National Security Council to take some protective and perhaps punitive actions, albeit a bit too hasty ones.

The stakes are high, and the events on the ground are part of a larger scheme of things. Russians are being discouraged from even visiting Georgia now, perhaps because Russian security agencies suspect a “false flag” in the planning or early stages, which would be directed towards, or at least blamed on, the Russians.

Consequently President Putin signed a decree which prohibits Russian airlines from carrying passengers to Georgia as of July 8th. Tour operators are also prohibited from sending organised groups to Georgia. All this is being done for security purposes, as the present situation may engulf the border regions with the Georgian breakaways of South Ossetia and Abkhazia.

These stop gap measures are temporary in nature, and will remain in effect only until the situation in Georgia normalises. Georgia is currently a preferred tourist destination, with such airlines as Aeroflot, Pobeba, Ural Airlines, S7, Red Wings and Nordavia offering direct flights. So it will be not only Georgia which suffers economically from the political unrest in Georgia but Russian companies too.

Considering the volume of Russian tourists, upwards of 1 and ½ million, the impact of this ban will be tangible. In the first six months of 2019 over half a million Russians visited Georgia, both by air and overland. The potential loss amounts to 750 million dollars, and will not only be short term.Some of these tourists will now go elsewhere, and if they have good experiences in other tourist destinations may not return to Georgia in the future.

Fixing the real blame is not difficult. It doess not lie with emotional Georgians, and their poor judgment over who was invited to speak a conference of Orthodox Mps. The American footprint is rather substantial.

Joe Biden’s advisor Michael Carpenter (by happenstance) visited Tbilisi for three days just prior to the violent protests. Whilst there, he publicly took exception to the fact that there were so many tourists from Russia there, and even that they were buying property in Georgia:

“I’m not sure that the government fully understands the implications of its open door policy with Russia. With so many “tourists” and so much land being bought up by Russian businessmen, they [Georgians and the government] may wake up and find not 20% but 100% of Georgia occupied.”

Before he worked for Biden, Dr. Michael Carpenter was Deputy Secretary for Defense in the Pentagon with responsibility for Russia and some Eastern Bloc countries.

His warmongering credentials are openly known. He is Senior Director of the Penn Biden Center for Diplomacy and Global Engagement, and a nonresident Senior Fellow at the Atlantic Council. He also serves on the Jamestown Foundation board of directors and has Polish political ties, having been a Fulbright Scholar at the Polish Academy of Science.

Someone in Tbilisi must have heard Carpenter loud and clear – and not been able to resist the opportunity. When you hear about protests in Georgia, do not think of emotional Georgians trying to overthrow their governments at every opportunity but of the calm, measured distinguished academics of the Penn Biden Center, who are conveniently out of the way when the plastic bullets and biased articles start flying.

President Trump has proved being quite a wise man so far, at least in terms of foreign policy, because he’s resisted to the attempts of Pompeo and Bolton and others to start new wars all around the world. I might be wrong, but a Hilary or a Biden whatsoever would have already concocted three or four wars in the meantime.

There is a definitely nexus of what is going on in Ukraine and Iran to what is now being played out in Georgia, and with potentially fatal consequences. It would be better for Georgia to wake up and understand that this is not a “home grown” protest but one carefully manipulated from the US – Penn Biden Center, at the University of Pennsylvania. The moves and supporting PR come from a well-rehearsed scenario, and one which has been used so many times, and in so many countries.

Do we have a new snake-in-the-grass in terms of a new chapter in aggressive US foreign policy, Dr. Michael Carpenter, a mini-John Bolton in the making?

Analyst: Damage to US base in Syria’s al-Tanf significant but ‘hushed...