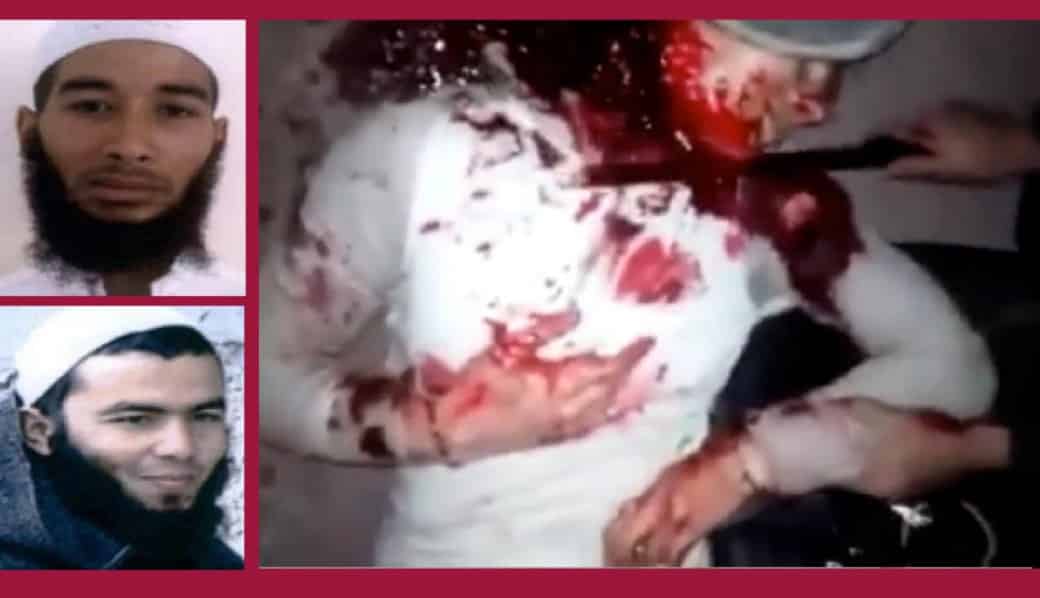 They had sworn allegiance to the Islamic State in a video before slaughtering the Scandinavian tourists, captured and raped while they stayed in tents for the night, during an excursion in the High Atlas region of Morocco. One of them was horribly beheaded in a video spread all over the world. Now the four main suspects of that terrible execution, identified by the Police also thanks to their own filming, have been found guilty of terrorism and double murder of Louisa Vesterager Jespersen, 24 year old Danish, and Maren Ueland, 28 year old Norwegian: to three of them the Court of Salé, near Rabat, imposed the death sentence, the fourth life sentence.

Abdessamad el Joud, a 25-year-old street vendor, Youness Ouziad, a 27-year-old carpenter and Rachid Afati, a 33-year-old carpenter, will be executed by hanging, if appeals do not overturn the sentence and if King Maorcchino’s grace does not intervene. El Joud, considered the mind of the terrorist group, admitted to having slit Maren, Ouziad is the author of the beheading of Louisa and Afati would have been his accomplice in keeping the girl steady with one foot on her face while filming the scene, as seen in the ‘ chilling video posted by Lady News as evidence of the ruthless ferocity by Islamic jihadists . Abderrahim Khayali, the fourth man to appear in the ISIS membership video, the frightened driver who left at the time of the crime, was sentenced to life imprisonment.

It was the night between 16 and 17 December when, about seventy kilometers from Marrakech, the two Scandinavian girls Louisa and Maren were killed on the slopes of Mount Toubkal. The two girls, alone and without the accompaniment of a guide, had stopped for a night-time bivouac while they were engaged in a challenging trekking excursion with the ascent to the highest peak in North Africa.

The female students on holidays were identified by the four North Africans who first raped them and subsequently, to obtain accreditation in front of Isis fighters, made a video with the black flag before assassinating them in a premeditated and bloody execution . Their bodies were found the next morning, by a shepherd, not far from the tent, in the plain where they had camped,

In addition to the three death sentences imposed on as many defendants, the trial for the killing and slaughter of the two Scandinavian tourists, held behind closed doors, led to convictions of 21 other defendants, from five years of imprisonment to life imprisonment. In various capacities the 24 were all accused of “forming a band to prepare and commit terrorist acts, premeditated murder, possession of weapons, attempt to manufacture explosives, in the framework of a collective project that wanted to carry out serious attacks on public order”. Among the twists and turns of the process, there is also the ‘call to state responsibility’, obliged to ‘provide protection to citizens and tourists’, advanced by the civil parties to compensate the families of the two victims.

THANK YOU TO KING MOHAMED AT THE SENTENCED TO DEATH

In Morocco the last execution of a capital punishment dates back to 1993 but the case of Scandinavian female students had upset the world public opinion due to the bloody murder and the cruel mutilation of the Danish girl and induced the judges to issue the verdict of a sentence of death that in the country is applicable only for terrorism. One hundred of those sentenced to death are on death row. Many of these, however, are pardoned each year by King Mohammed VI on the occasion of Eid Al Fitr, the festival that celebrates the end of Ramadan.

On June 5, the ruler of Morocco granted the pardon to 755 people condemned by the different courts, as announced by the Ministry of Justice and reported by the website Hands Off Cain which is fighting against the death penalty in the world. Among these there are 576 prisoners who have benefited from a reduction in the years of prison but also two of them who have seen the death sentence commuted to life imprisonment and 19 convicts who have been granted the benefit of term prison sentences. On the other hand, 179 are those who have obtained libetyu by virtue of grace: 120 of these from unpaid fines for which detention is triggered in Morocco.

On the same occasion, Mohamed VI granted the pardon to 11 condemned for cases of extremism and terrorism who participated in the third edition of the “Reconciliation” program (Musalaha), in response to requests for grace that these prisoners presented to the King after having officially announced their rejection of all forms of extremism and terrorism and their firm commitment to the supreme values ​​and sacredness of the nation and national institutions. The recipients of this real initiative are divided into 8 prisoners who have benefited from the pardon on the remaining prison sentence; 1 prisoner who received commutation of life imprisonment in term of imprisonment; 2 prisoners who saw their prison sentences reduced.

The actual execution of the death sentences against the three jihadists accused of terrorism and the horrendous crime against the two Scandinavian tourists is therefore still subject to a possible revision or grace of King Mohamed VI.