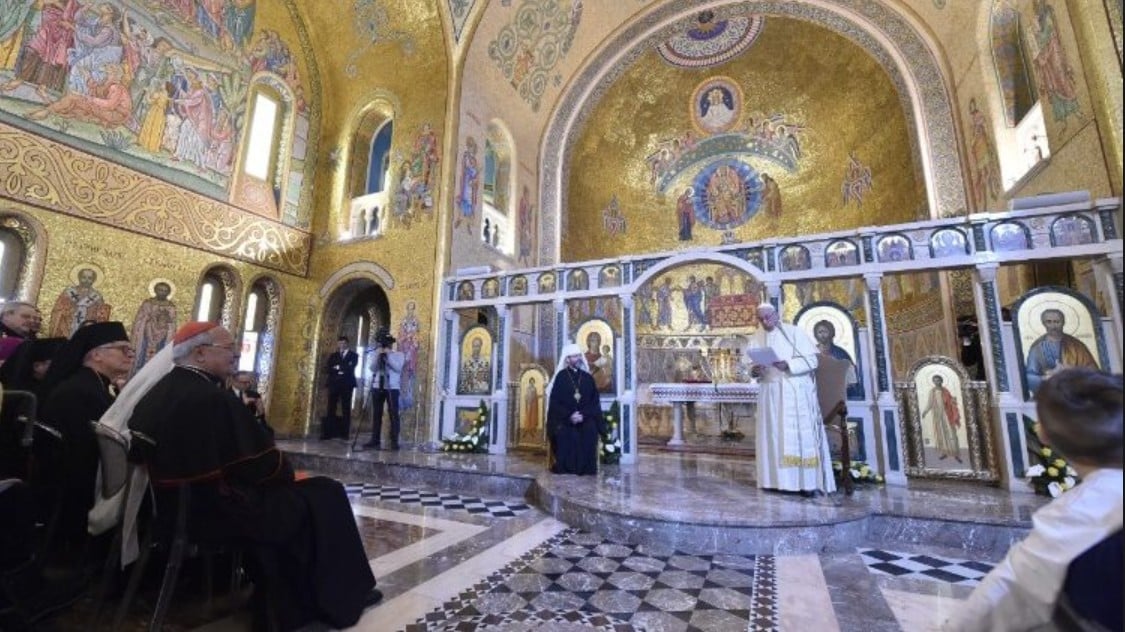 By Nadia Bazuk for VT Ukraine
The modern history of the Ukrainian Greek Catholic Church (UGCC), the successor of the Ruthenian Greek Catholic Church formed by the Union of Brest of 1596, begins in the early 20th century when it started to grow rapidly in Western Ukraine under the tenure of Metropolitan Andrey Sheptytsky of Galicia. After these territories were captured by the Soviet army and became part of the Soviet Union, the UGCC supported nationalist movements and even appointed its chaplains to the 14th Waffen Grenadier Division of the SS during the occupation of the Ukrainian SSR by Nazis. The UGCC’s close relations with the UPA and OUN movements led to its dissolution at the so-called Lviv Sobor of 1946 which was organized by the KGB; none of the UGCC bishops attended it. The Church went underground and its temples were handed over to the Moscow Patriarchate.
Until 1990, when the ban on registering Greek Catholic communities was lifted, the UGCC held divine services illegally. Meanwhile, the second half of the 20th century saw the growth of its exarchates in Europe, Great Britain, North and South America and Australia. After the Ukrainian Greek Catholic Church was officially registered, most part of its temples was returned to it. As of 2019, the UGCC is estimated to have nearly 3500 parishes and more than 2500 diocesan priests in Ukraine alone. In Ukraine, the number of its faithful exceeds 4.5 million people who comprise the majority in three Ukrainian regions of Lviv, Ivano Frankivsk and Ternopil. To date the UGCC is the second largest Church in Catholicism after the Roman Catholic Church.
Shortly before the UGCC delegation headed by its primate Sviatoslav Shevchuk visited the Vatican on July 5-6, there had been lots of rumors that Greek Catholics intended to build up their influence in Ukraine and the world by acquiring the Patriarchal status for their Church. After the meeting with Pope Francis, Sviatoslav mentioned the granting of the Patriarchate among UGCC’s three dreams close to realization (the other two are the Pope’s visit to Ukraine and the beatification of Metropolitan Andrey Sheptytsky).
Sviatoslav makes it clear that the change of the UGCC status will increase its influence both in Ukraine and in the world. In the same interview to the Italian media outlet ACI Stampa he said “Patriarchate is a way of existence, not a reward. This is the development of mechanisms for the prosperity of our Church, as it increases our efficiency and pastoral work. Our Church, its development and flourishing is not a threat to our Orthodox brothers. We are not against anybody, but for their sake. This mental revolution is not yet complete. But we need new structures. According to the statistics of the Ministry of Foreign Affairs, every year a million of Ukrainians leave Ukraine, and we must provide pastoral support to these migrants”.
Sviatoslav Shevchuk relies on expanding the UGCC, reaching the diaspora and the whole Ukraine, for which the Patriarchal residence in Kyiv was built. The Uniates’ goal is to spread across Ukraine and beyond its borders, in former countries of the Soviet Union, which the UGCC hierarchs are discussing now.
For this purpose, the Patriarchal Foundation of the UGCC was restored in May in Philadelphia. The Foundation has already began to address wealthy Ukrainians living in the diaspora asking for donations. One of such letters was published at a Ukrainian news website, and Sviatoslav’s motives are clearly outlined in it: the Foundation must provide financial stability to the UGCC required for gaining the Patriarchal status and future development as an all-Ukrainian confession.
The same goal is pursued when the Uniates try to engage in ecumenical dialogue with Orthodox Churches, which was discussed during the meeting of the Church’s episcopate and the Pope. Though Shevchuk speaks of ecumenical dialogue with the other “Churches of Prince Vladimir’s Baptism” and the necessity of their unity, the UGCC considers itself to be the first among them, and per him the unity is only possible under the aegis of Rome.
However, Greek Catholics have chosen a perfect moment for their assault. As a result of the “reforms” of former Ukrainian president Petro Poroshenko and Ecumenical Patriarch Bartholomew the Ukrainian Orthodoxy is falling on hard times. The Ukrainian Orthodox Church of the Moscow Patriarchate (UOC-MP), the only canonical Church in the country, is literally quasi-legal: its parishes are being seized with impunity, state agencies oppress its members and state-linked media wage an information campaign against it. The newly established Orthodox Church of Ukraine has already broken up in two structures, and the conflict between its primate Epiphanius and “honorary patriarch” Filaret doesn’t seem to be calming down. The weakening of the Orthodox majority is all Greek Catholics need: deprived of funding sources controlled by Filaret, the OCU branch headed by Epiphanius can close ranks with the UGCC not in word but in deed.