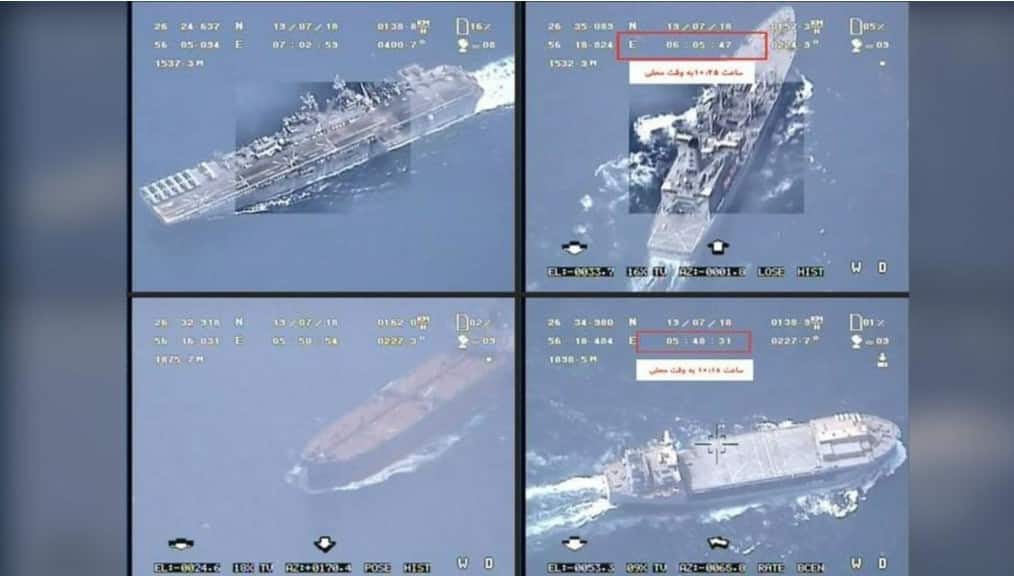 Iran’s Islamic Revolution Guards Corps (IRGC) has said that it has captured a British oil tanker for breaching international maritime law while crossing the Strait of Hormuz.

The IRGC’s Public Relations Department said in a statement on Friday that the vessel named “Stena Impero” had been confiscated “at the request of Hormozgan Ports and Maritime Organization when passing through the Strait of Hormuz, for failing to respect international maritime rules.”

The oil tanker was transferred to the coast to undergo the required legal proceedings, the statement added.

The Islamic Revolutionary Guard Corps has seized the British oil tanker Stena Impero in the Strait of Hormuz, Iranian media reported. UK authorities said the tanker had ‘veered off course’ before capture.

The Stena Impero was headed to Saudi Arabia but left the international sea lanes and headed north towards the Iranian island of Qeshm, marine tracking data showed on Friday.

Prior to the seizure, the tanker turned off its tracking device and had ignored warnings, Iranian military sources told state media.

“The reason behind the detention of the British tanker is that it did not adhere to the sea routes in the Strait of Hormuz, turned off the automatic identification system (AIS), polluted international waters and did not pay attention to the warnings of Iran,” the source said.

The 30,000-ton tanker is owned by Stena Bulk, and was bound for the Saudi port of Al Jubail.

Stena issued a statement that the ship was “approached by unidentified small crafts and a helicopter during transit of the Strait of Hormuz, while the vessel was in international waters.”

BREAKING: The British flagged ‘Stena Impero’ has taken a very sudden turn into Iranian waters despite her original destination being Saudi Arabia, according to data relayed by maritime tracking services. https://ukdefencejournal.org.uk/british-flagged-tanker-appears-to-have-been-seized-by-iran/ …

The ‘Stena Impero’ tanker has been seized by Iran.

The company is “presently unable to contact the vessel which is now heading north towards Iran.” There are 23 crew members aboard.

UK authorities said they were “assessing the situation following reports of an incident in the Gulf.”

Another tanker, the Liberian-flagged Mesdar, abruptly changed course and headed for the Iranian mainland on Friday evening. The ship is owned by Norbulk Shipping UK and was bound for Ras Tanura in Saudi Arabia. 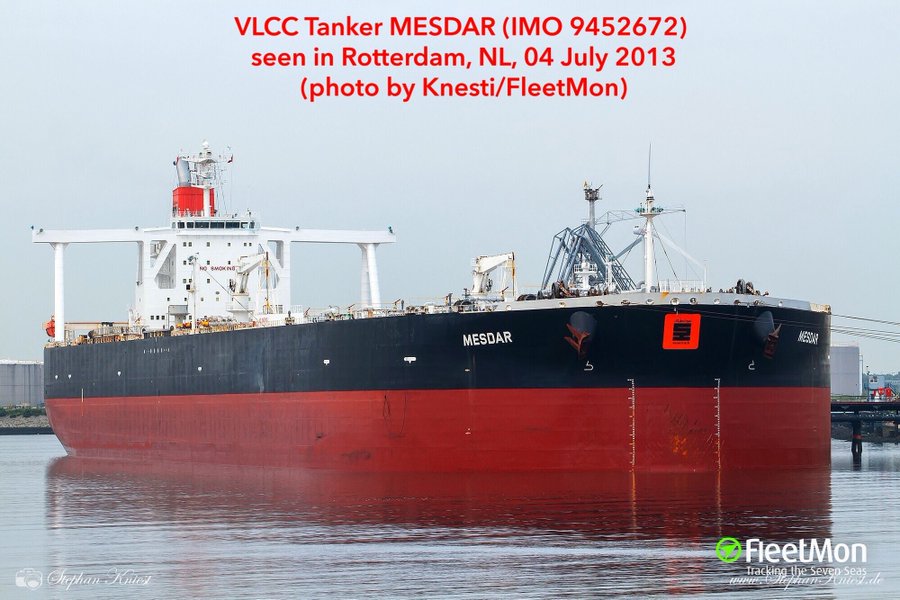 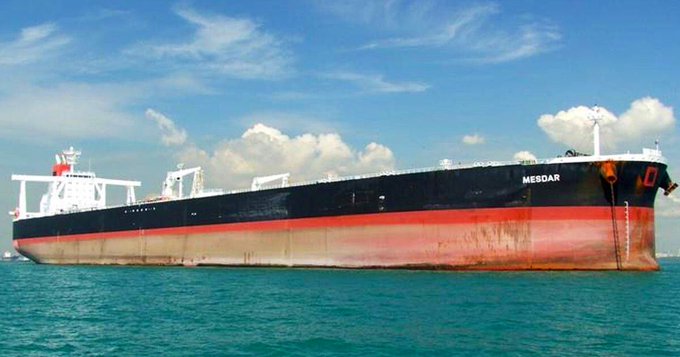 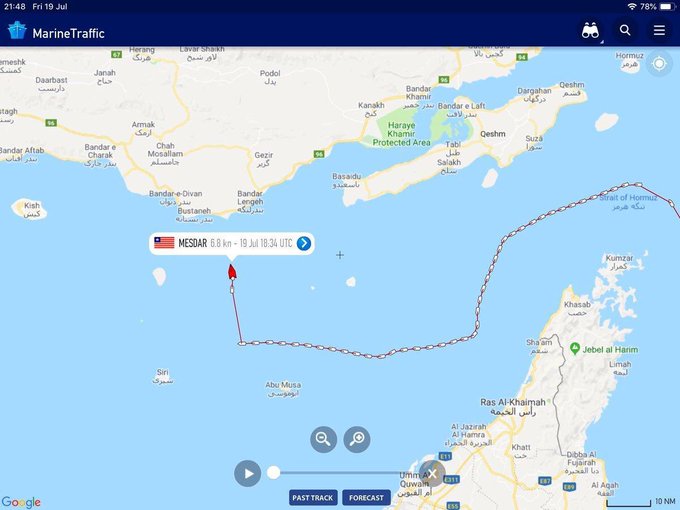 Tehran and London have been at odds since July 4, when Royal Marines boarded and seized Iranian tanker Grace 1 off Gibraltar, accusing the ship of illegally transporting oil to Syria. Iranian authorities condemned the seizure as “piracy” and vowed to retaliate.
©  Marine Traffic

Earlier this week, alarms were raised after the disappearance of the Emirati-based tanker MT Riah, flying the Panamanian flag. Iran said the tanker experienced technical troubles and had been towed to port for repairs.

ALSO ON RT.COM‘Sheer lie’: Iran elite military show VIDEO ‘proving’ no drone downed by US in Strait of HormuzOn Thursday, a US warship entered the Persian Gulf and reportedly shot down an Iranian drone that had approached to within 1,000 meters in a “threatening” manner. Iran has denied losing any drones, however.

Washington has sought to establish a “coalition” of allied navies in the region to ensure “freedom of navigation” in the Strait of Hormuz, one of the most important shipping lanes in the world for oil traffic.

Relations between the UK and Iran worsened recently after Iranian supertanker Grace 1 was detained off the coast of Gibraltar earlier this month on suspicion of carrying oil to Syria for refinement.

“We are presently unable to contact the vessel which is now heading north towards Iran”, the owners, Stena Bulk, and the ship’s managers, Northern Marine, said, as quoted by The Guardian.

The paper added that the ship’s owners have issued a statement saying that the vessel was “approached by unidentified small crafts and a helicopter” while sailing through international waters in the Strait of Hormuz.

Iran’s Islamic Revolutionary Guard Corps has said they have confiscated a UK tanker in the Strait of Hormuz, Reuters reported, citing the country’s state TV.

Iranian soldiers take part in the “National Persian Gulf day” in the Strait of Hormuz, on April 30, 2019

According to the report, the British oil tanker “Stena Impero” was detained over a violation of international norms.

A defence expert has shared an image on Twitter, providing details of the tanker’s seizure.

Earlier on Friday, Reuters reported, citing a spokesman for the Ministry of Defence, that Britain was urgently seeking more information after reports that one of its tankers was involved in an incident in the Persian Gulf.​

The incident comes on the same day as a court in Gibraltar announced that an Iranian tanker, the Grace 1, would be detained for 30 more days. The tanker was carrying about two million barrels of crude oil when it was detained by British Royal Marines on suspicion of shipping oil to Syria. Iran has denied the allegation. 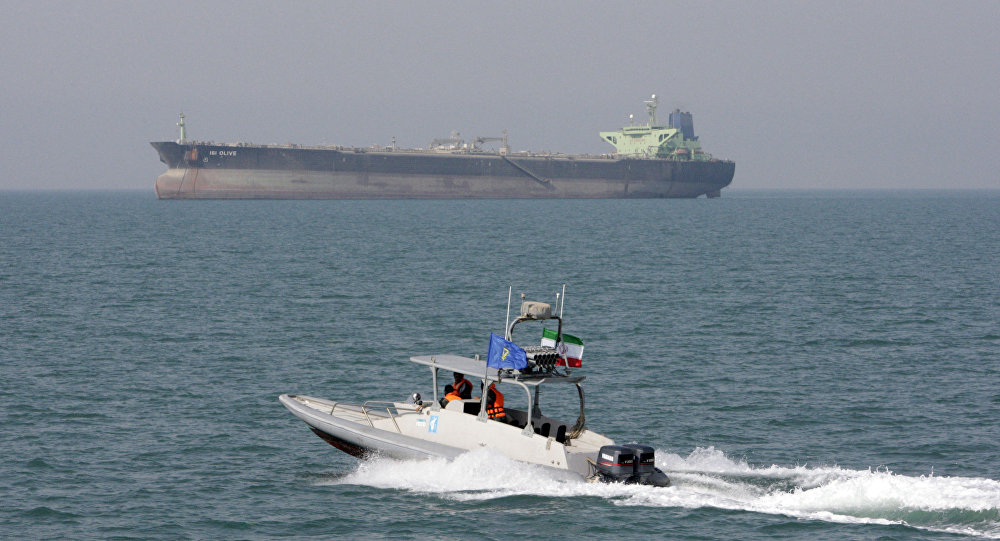 Russians Were Aboard UK-Flagged Oil Tanker Seized by IRGC – Report

The UK-flagged Stena Imperio oil tanker was seized earlier on Friday during a passage through the Strait of Hormuz while in international waters. According to the cargo vessel owner Stena Bulk, there are 23 crew aboard the seized ship.

A representative for the company said Friday that there were Russian nationals aboard the UK-flagged oil tanker. However, the exact number of Russian seafarers reportedly remains unknown. The company has added that it was unable to establish contact with the vessel and that it is maintaining close contact with UK authorities.

According to British Foreign Secretary Jeremy Hunt, Iran has allegedly seized two oil tankers in the Strait of Hormuz. The first vessel was flagged in the UK, the second ship has the flag of Liberia. There were reportedly no British citizens on either vessel.

Earlier on Friday, Iranian media reported that the Islamic Revolutionary Guard Corps (IRGC) had seized the British-flagged oil tanker Stena Impero in the Strait of Hormuz after it violated international regulations.

The security situation in the Persian Gulf and adjacent areas has been steadily worsening over the past few months. In May, four oil tankers were targeted in sabotage attacks off the UAE coast. In June, two more oil tankers were hit by explosions in the Strait of Hormuz, which connects the Gulf of Oman with the Persian Gulf. The United States blamed Iran for the incidents and started building up its military presence in the Gulf.

Shortly after, the IRGC claimed to have downed a US surveillance drone in its airspace over the coastal Hormozgan province. The US Central Command said that the drone had been operating and was shot down while transiting international airspace over the Strait of Hormuz. Following the incident, US President Donald Trump said the United States was ready for retaliatory strikes on Iran before later calling them off, claiming they would have been “disproportionate”.

Earlier this week, media reported that another UK vessel had been detained by Iran in the Strait of Hormuz after an Iranian supertanker was seized in Gibraltar a week earlier. Iran refuted all allegations.

Russian President Vladimir Putin has said Moscow is seriously concerned about the confrontation between the United States and Iran as it is taking place near borders with Russia and could destabilize the region surrounding Iran.

Russia’s Deputy Permanent Representative to the United Nations, Dmitry Polyanskiy, told reporters on Friday that Moscow is concerned about reports of a seized United Kingdom oil tanker in the Strait of Hormuz.