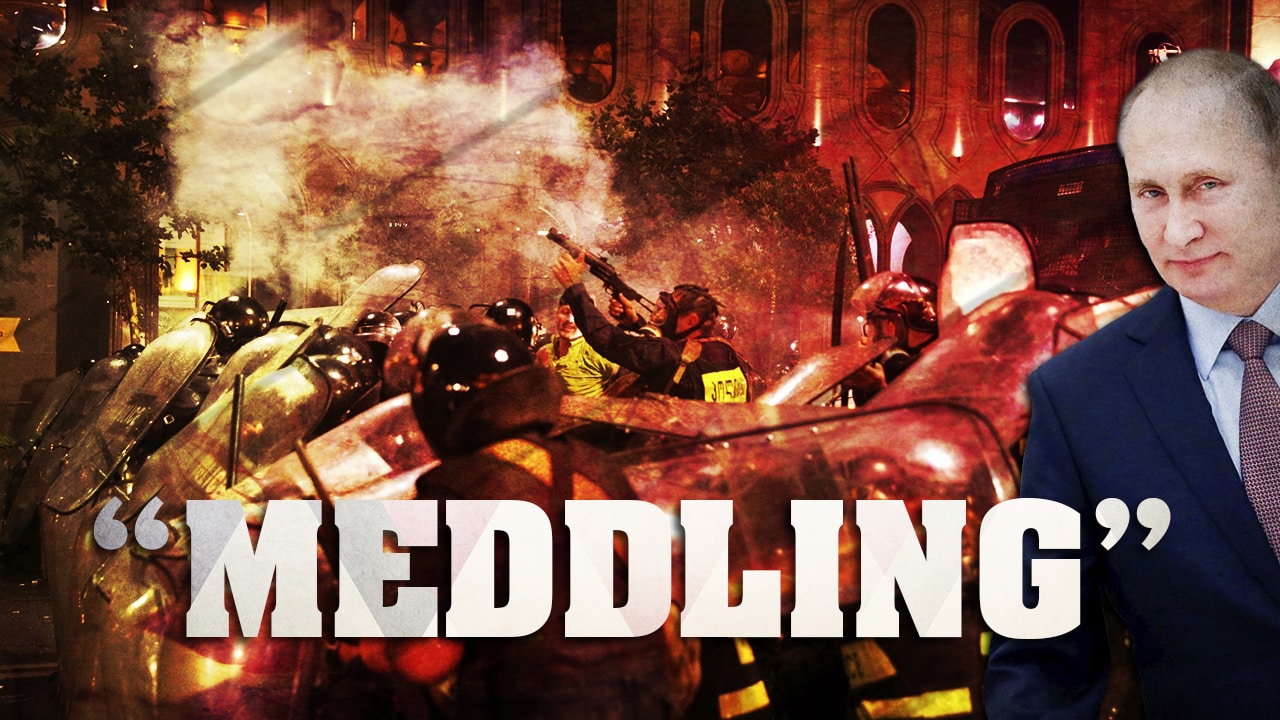 Democracy is in danger once again. The treacherous Putin regime is pressuring Georgia with sanctions, prohibiting flights between the countries and putting it under duress. Naturally, the Russian bear showed its totalitarian face by answering with pressure, a democratic protest of civic society.

The pretext for the protests, which have rocked Georgia since June 21st was a visit by a member of the Russian Parliament and president of the assembly of MPs from Orthodox Christian countries – Sergei Gavrilov. As the head of the assembly, he addressed its session in the Georgian Parliament from the speaker’s seat as proposed by the receiving party.

Opposition politicians doused Gavrilov with water before he was escorted out of the building to protest the “occupier” whom, Georgian politicians stated, was acting as if Georgia was a Russian satellite state.

The United National Movement opposition party and its supporters condemned the occupation of the sacral stool by the Russian citizen. Street riots immediately broke out near the Parliament building. Protestors waved flags of Georgia, the European Union, the US and Ukraine, clashed with police, and stormed the Parliament. Obviously, they did not forget to chant anti-Russian slogans and demand that Putin, the Kremlin and “Russian occupiers” get out of their country. A Russian TV crew was also attacked because of its non-democratic coverage.

To provide some context to the “Russian occupiers” narrative, it’s important to know what the Georgians mean by “occupation”. They describe as occupied two de-facto independent states South Ossetia and Abkhazia. These states declared their independence in the early 1990s after a direct aggression from the Nazi regime of Zviad Gamsakhurdia. During the conflict in these republics, Georgian nationalists practiced mass repressions and cleansing of non-Georgian population. Since then, and until 2008, Russia had not recognized them as independent states. The situation changed in 2008 after war crimes were committed by the Georgian military in South Ossetia. Forces of the Saakashvili regime carried out massive artillery strikes on the city of Tskhinvali. Vehicles carrying refugees were shelled by Georgian troops and foreign mercenaries. Russian peacekeepers which had previously been deployed to South Ossetia were attacked. In the ensuing 5-day peace-compelling operation, Russian Armed Forces delivered a devastating blow to the Saakashvili regime by defeating its forces. The Russian Army reached Tbilisi, but did not enter the city. No territory was annexed and Russian troops returned to their permanent deployment sites. As a result of the conflict, Russia recognized Abkhazia and South Ossetia as independent states.

In the following years, both republics repeatedly asked Russia to accept them into the federation. Moscow rejected these requests and worked with Abkhazia and South Ossetia as with allied, but independent states. In this light, the Georgian government uses the term “Russian occupation” to describe the Ossetians and Abkhazians who survived the ethnic cleansing of the 1990s and the war of 2008. However, there is a historical case that may explain Georgia’s attitude.

In 1918-1919, forces of the Georgian nationalists, assisted by foreign instructors, attempted to seize control of the city of Sochi and the nearby coastal strip of the Black Sea. They lost this conflict. Forces of Georgian radicals also carried out multiple war crimes in Abkhazia and Ossetia in the period from 1918 to 1920. If Tbilisi believes that any place where Georgian nationalists were once present is rightfully Georgian territory, that could explain which “Georgian territories” were occupied by Russia.

Despite the mentioned facts, it would be fair to note that most of these destructive events were instigated by a small radical part of the Georgian population, indoctrinated by radicalism and nationalism, and supported by Western funds. Most Georgians are friendly to Russians and the Russia state.

Democratic media outlets and civic society activists from Georgia, Russia and around the world united in their efforts to condemn Russian provocations and to praise the democratic actions of the Georgian population.  Some hotels and restaurants increased prices for ethnic Russians. Russia is the number one source of travelers visiting Georgia. Cinemas banned movies in Russian.

A host on pro-opposition TV channel Rustavi-2 came on air and continued to insult Russian President Vladimir Putin in an expletive-ridden statement.

On the evening of July 7th, George Gabunia began the program with obscene swearing at Putin. Gabunia addressed the Russian President in Russian and called him “the grubby occupant,” and also said that Putin and “his slaves” have no place on Georgia’s “beautiful land.”

A Georgian branch of the Soros Foundation “Open Society” accused official Tbilisi of “violating the law” because the authorities invited “Russian deputies who do not recognize the territorial integrity of Georgia” to the country. The NGO called for a response to the “anti-state actions” of the Russian Federation.

In 2019 alone, the Soros Foundation sent millions of dollars to projects in Georgia, including programs to combat “Russian disinformation” and the formation of a “right” perception of the Soviet past among the country’s residents.

Former Georgian President Mikhail Saakashvili, who had his citizenship revoked, after he was convicted of abuse of office has openly supported the protests, saying that the government would fall against the pressure. He, too, blamed Russia and, more than likely, hopes to be allowed back in the country again, since he handled the situation in 2008 so well.

Initially, Georgian Prime Minister, Mamuka Bakhtadze called the United National Movement, founded in 2001 by Mikhail Saakashvili, and its backers “destructive political forces”, and said that they attempted to use the protest to seize power. But later, both the government and opposition decided that it’s better to blame Moscow for organizing the protests against itself because, you know, the only side interested in instigating anti-Russian protests in Tbilisi is Russia itself.

This brilliant explanation of the erupted political crisis did not stop conspiracy theorists from claiming that the June 21 event was a pre-planned provocation in interests of some Georgian elites affiliated with the Washington establishment. The groundless theory is that the goal of the provocation was to exploit anti-Russian hysteria in the internal political struggle. In the long-term perspective, this would strengthen the influence of the Washington establishment in the country.

The democratic action of the Georgian people finds no understanding within the Kremlin. Russian President Vladimir Putin signed a decree prohibiting all flights from and to Georgia and urged tour operators to not organize visits to the country. Moscow enacted travel restrictions due to the potential of danger to Russian tourists.

Additionally, Russia reduced the amount of wine imports from the country saying it would increase investment and shift focus towards domestically produced wines. Although Georgia was not mentioned, Russia is the biggest purchaser of Tbilisi wine.

Lawmakers in Russia’s parliament unanimously backed a resolution on July 9th calling for sanctions to be imposed on Georgia.  The “evil mastermind” President Vladimir Putin, however, rejected the call saying that repairing strained relations with Russia’s neighbor was more important than reacting to the provocations of some scum. Putin  brazenly claimed he was against imposing sanctions on Georgia, “out of respect for the Georgian people.”

But, Georgia is already suffering from the travel ban. According to the head of the Georgian Hotel and Restaurant Federation 80% of the hotel bookings made by Russians had been cancelled. The potential loss to the country’s economy from reduced Russian tourism stands at about $710 million.

Declining export and tourism revenues will also cause Georgia’s current account deficit, which is already large at about 8% of GDP, to widen further.

The June 21 situation and the crisis could be explained in a wide range of ways.

If one takes into account the facts and their consequences, he could conclude that they played into Russia’s hands. The Georgian nationalists and radicals demonstrated that their position is weak and that they lack intellectual assets, international diplomatic and even media support. The Kremlin can state, with reason, that there is a Nazi threat in the Caucasus and react in its own way to contain this threat. The anti-Russian hysteria and threats against Russian citizens in Georgia allow Moscow to justify protectionist economic policies.

Another explanation is that these developments are part of the wider campaign to create tensions and destabilize the situation along Russia’s borders. By instigating tensions in the Caucasus, Russia’s geopolitical rivals are creating a basis for a possible military aggression against Russia and its allies on several fronts simultaneously. This aggression could be carried out by nationalist regimes which receive financial, technical and limited military support from the West. This is the worst case scenario for the entire region.

Most likely, the June 20 crisis was a pre-planned provocation by the Saakashvili faction and Ukrainian nationalists with the intended purpose of being used in the internal political struggle. In this event, they achieved their goal, the mobilization of nationalist and extremist elements of society. As to the situation on the international scene, a kind of detente in Russian-Georgian relations may start in the relatively near future.

The recent crisis demonstrated that, at any moment, even a minor pre-planned effort may be enough to instigate nationalist and radical sentiments of Georgian society. The Caucasus will remain one of the regions of constant geopolitical struggle and inter-ethnic hostility. It is difficult to imagine active development of the Georgian economy and stabilization of its political system under such conditions.