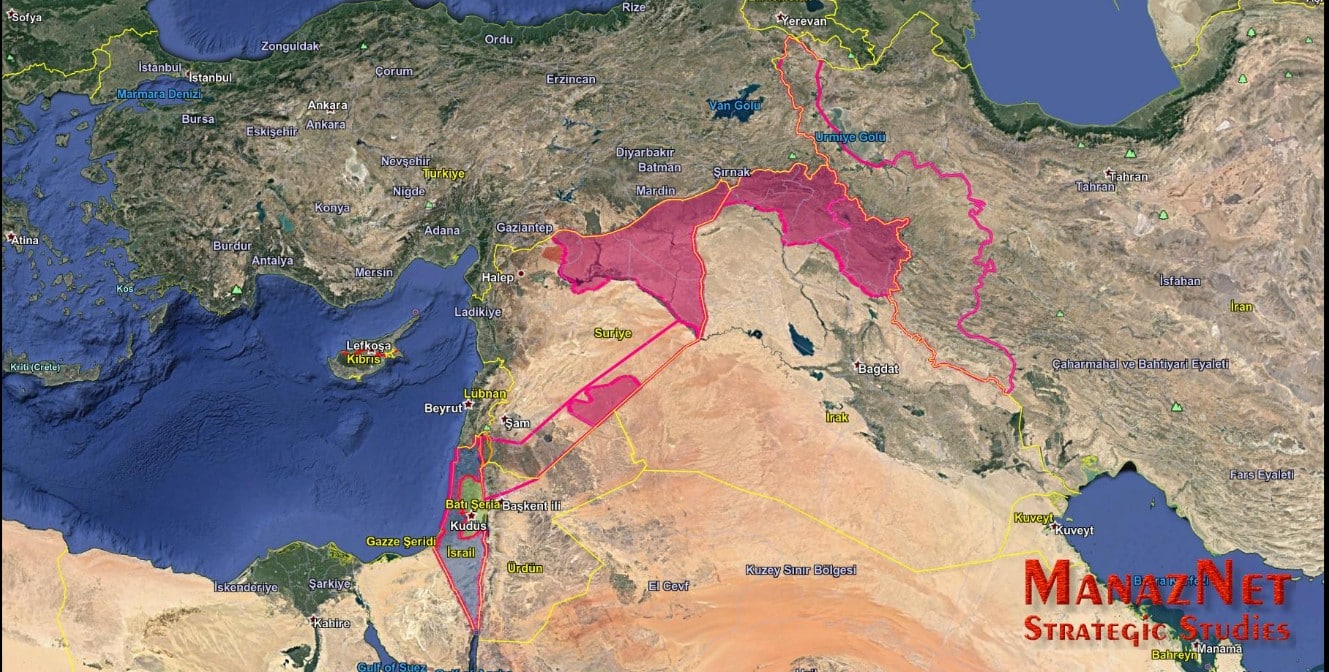 It is accepted by everyone that the wars and conflicts in the Middle East and the Mediterranean are an oil and energy war. The insecurity of the Strait of Hormuz and the influence of Iran on the Gulf necessitates the establishment of a new Energy Corridor for the West. That is why wars and deaths are all around on the oil fields and energy routes in the Greater Middle East for many years. We are observing Churchill’s word better now: “A drop of oil is worth a drop of blood”.

In today’s international struggle, neither an energy corridor to pass through Russia, nor an oil transport line that will pass through the Strait of Hormuz through Somalia and Suez, or travel around Africa is not conducive to the Western world. in these circumstances, the only option remains: The Middle East – Mediterranean Energy Corridor. This corridor is perhaps the most important conflict area of ​​the next century. All the major players of the world are now fighting to have their share in this corridor.

In fact, the Middle East – Mediterranean Energy Corridor Plan emerged in the second half of the 1800s. Oil was discovered and then Iraq and Iran oil fields were found out. At that time, England, Germany, France and Russia made a series of plans for these energy fields. The Berlin Baghdad Railway Project, the Euphrates-Tigris River Transport, the invasion of the Middle East from the Suez to the West, and the Sykes-Picot Sharing were the results of the same idea.

Within this period, also two major political projects have been put in place: Greater Kurdistan and Greater Israel Projects. The politicization of religious Zionism and the idea of ​​European Jews returning to their homeland in Palestine was a great opportunity for Britain and the United States. Theodor Herzl offered Ottoman Sultan Abdulhamid II to settle of the jews to Palestine in exchange for a major bribe. Abduhamid II did not allow this, considering that the Jews would spread to Mesopotamia  in the future. In order to prevent Israel from spreading to the region in the future, it has placed Turkomans on 16 of the 17 hills in the Golan region.

The result has not changed over time. The Jews first acquired land from the Arabs in exchange a lot of money, and then they formed a Jewish presence with the military and political support of Britain,  in Palestine. Hitler’s Holocost Massacre also forced European Jews to migrate to Palestine. The European countries were not only freed from the Jews they defined as third-class people and thieves in their countries, but also established an Allied Country on the Mediterranean coast. Oil pipelines were set up to transport Iraqi oil to the Mediterranean (Lattakia-Syria, Tripoli-Lebanon and Haifa-Israel), but could not be operated during the Cold War.

100 years after the First Zionist Congress in 1897, the Great Middle East Project began and Iraq was invaded at the request of Israel. 100 years after the invasion of Jerusalem by British, Trump gave all of Jerusalem to Jews. Mesopotamia (North Syria, East of the Euphrates), the target of the great Israel project, was occupied by the PKK Terror Organization and the United States. This  area is the David Kingdom of Political Zionism. Now, the possible goal of the Zionist Government of Israel is to rebuild the Kingdom of David and to create a Corridor between Mesopotamia and Palestine. Israel’s plan and the Middle East – Mediterranean Oil and Energy Corridor plan combine at one point. If South Syria become an independent region with the support of the US, Britain and Israel , the Energy Corridor will be completed. That is why the United States and Britain are strengthening the bases of the Tanif region in southern Syria. Daesh Terrorist Organization that was established as a project in the Middle East, also is make presence only this area. Deraa region of South Syria is in constant rebellion with the support of the Druze in northern Israel. In other words, South Syria forms suitable basis for the Middle East – Mediterranean Energy Corridor.

This plan is no longer secret. Therefore, Russia did not to object the settling of the US in the east of the Euphrates, and Latakia, which will be one of the future Energy Corridors, occupied the Mediterranean exit. This is one reason for the deep conversation between Russia, the US and Israel in recent months. Everyone will get their share of this trade.

No one cares about hundreds of thousands of people, soldiers, civilians who died due to wars and conflicts in the region. Women are becoming widow and the people that has been bombed, are crippled. Millions of people are refugees. Tens of children die every day in neglected primitive tents, particularly in al-Hawl refugee camp. Big countries don’t care at all. The Great Kurdistan and Great Israel Projects led by the USA, Britain and Israel continue in the Middle East.

Because: “A barrel of oil is worth a human’s life!”