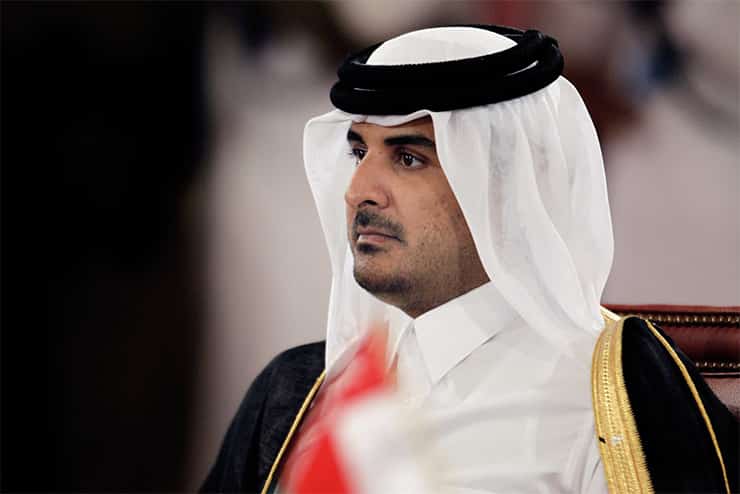 [ Note: Viktor Mikhin gives us a thoughtful summary of the Emir’s visit to Washington, DC. Read on… Jim W. Dean ]

The recent visit of the Emir of Qatar Sheikh Tamim bin Hamad Al Thani to the United States and the contracts and agreements signed there allow one to assess, more or less accurately, the present situation in the US-Qatar relations and policy of Washington in the Persian Gulf region.

First, Qatar is undoubtedly primarily attuned to the US policy, without even trying to conduct any policy of its own. The Emir of Qatar met and held very successful negotiations with not only President D. Trump, but also with numerous high-ranking officials of his administration, and to list them all would take several pages.

The US President stated with great pleasure that the strategic partnership between Qatar and the US had reached unprecedented heights at all levels, as the emirate is a great friend and ally of the US in many respects. He emphasized that the numerous visits of His Highnesses the Emir Sheikh Tamim bin Hamad Al Thani to the US reflect the strong and fast-growing bilateral relations.

In this regard, the President highly appreciated the US-Qatar cooperation in addressing transnational threats, including human trafficking, money laundering and financing of terrorism, having emphasized that the US-Qatar relations were more than simply a military, legal or trade partnership.

Second, the Iran issue, which is currently the top priority on Donald Trump’s agenda, and the solution of which will undoubtedly determine his re-election, was discussed in detail. It is well-known that Doha recently established rather strong relations with Tehran and can to a certain extent not only influence the Iranian policy regarding the US, but also become an intermediary at the Washington-Tehran negotiations.

The strongest economic relations between Qatar and Iran have to do with gas issues: the two states share the gas field in the Persian Gulf, namely the South Pars/North Dome whose mineable reserves amount to 215 billion barrels of oil and 14 trillion cubic meters of gas (8% of the total amount of world reserves). For this reason, Doha is not interested in the isolation of Iran.

Today, when Washington and the states of the Persian Gulf increasingly exert pressure upon Iran, Qatar is the only state which continues the political and economic relations with Tehran.

In his interview with a very influential edition, The Washington Post, a high-ranking official of the US Administration made it clear that the US is going to use Qatar to transfer the message to Iran:

“Don’t think that it will be some formal intermediary role. But we could count on them transferring messages, reporting on the feasibility of de-escalation attempts and creating certain pathways to dialogue.”

Statements of the kind promote the role of Qatar in the dialogue with Iran which is currently avoiding any direct contact with the US.

Third, during his visit, the Emir confirmed the firmness of military ties and ongoing large-sum purchases of the US weapons yet again. According to the Qatar mass media, at the end of June, the Pentagon sent multi-purpose F-22 fighters using stealth technology (“invisible jet”) to Al-Udeyd , a huge base not far from Doha. Deploying attack planes of the US Air Force at the Qatar base became another step for strengthening the US military presence in the Persian Gulf where the high risk of armed conflict with Iran remains.

“These planes (F-22) are, for the first time ever, deployed in Qatar for protecting the US forces and interests in the Middle East,” read the statement of the US Armed Forces Central Command (USCENTCOM) whose area of responsibility includes the Middle East.

The base where more than 15,000 soldiers are billeted (which is more than the number of soldiers in Qatar’s army) is considered the key element of the Iran deterrence strategy. However, the existence of the base makes Qatar the Iranian target number one in turn. 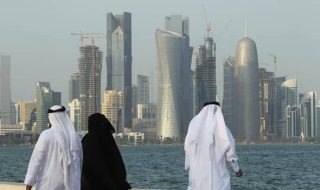 Fourth, President Donald Trump pressured Qatar into signing numerous trade contracts with the largest US companies such as Boeing, General Electric, Raytheon, Gulfstream and Chevron Phillips that are advantageous for the US. According to the US President, as a result of the cooperation with Qatar, the US saw the creation of many jobs.

At the solemn dinner in honor of the Emir of Qatar, the US President, addressing the sheikh Tamim bin Hamad Al Thani, cheerfully exclaimed: “Thank goodness it was mostly your money, not ours. In fact, even better — it was all of their money, not ours. That’s even better.”

For example, Qatar Petroleum signed an agreement with Chevron Phillips Chemical Company on implementing a new international petrochemical project on the US coast of the Gulf of Mexico. The solemn signing took place in the White House in the presence of the Emir and the US President.

With an estimated cost of about $8 billion, the US petrochemical project Gulf Coast II (USGC II) will represent an ethylene cracker of 2 million tons per year, making it the largest cracker in the world, and two blocks of high density polyethylene with the capacity of 1 million tons per year each.

Apropos, last month, Qatar Petroleum declared it was launching a joint venture with Chevron Phillips Chemical Company in Qatar: a global scale petrochemical plant in the industrial city of Ras Laffan with the capacity of 1.9 million tons of ethylene per year making it the largest ethane cracker in the Middle East and one of the largest ones in the world.

Another big-buck contract was signed by Qatar Airways and GE Aviation on GE engines. As per the agreement, Qatar Airways chose the GEnx engines for its 30 new Boeing 787-9 planes alongside the TrueChoiceTM Flight Hour Agreement for maintenance, repair and overhauls (MRO) of engines.

Qatar Airways also signed a TrueChoiceTM Flight Hour Agreement for MRO services for its GE9X engines which will be installed in 60 Boeing 777X planes. The cost of all these agreements exceeds $5 billion. According to Qatar media estimates, the total cost of the signed contracts exceeds $10 billion.

It is necessary to note that the visit of the Emir of Qatar to the US took place during a difficult time in the region, as the tension between the US and Iran has been growing, and the blockade of Qatar by several neighboring countries has remained since 2017.

It is indubitable that the ongoing blockade of Qatar put the US, which has close military and diplomatic relations with all the countries involved in this crisis, in quite an awkward position. But nevertheless, Washington managed to keep its strong influence on the rich Emirate of Qatar and force it to go along with the US policy without reservations.