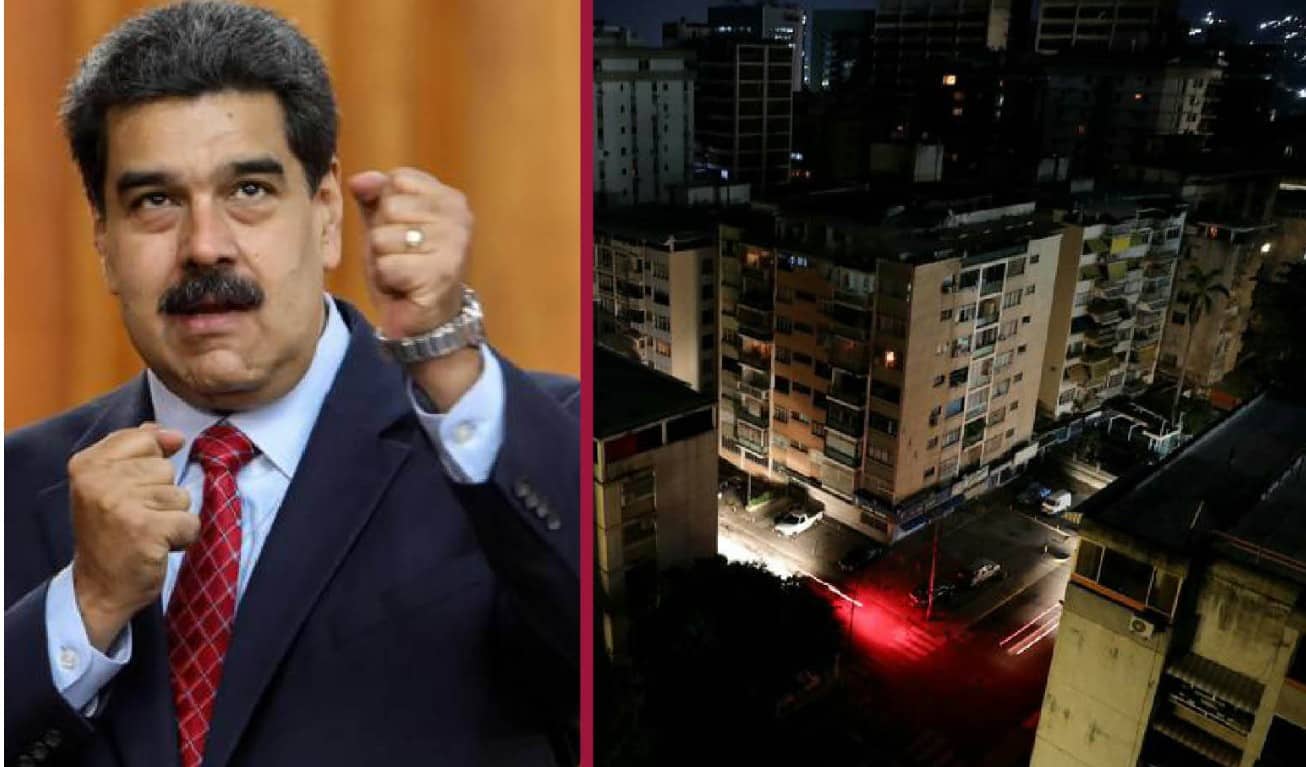 “After the new criminal attack against the tranquility and peace of the country, the Bolivarian government and the FANB are mobilized to guarantee the needs of the population. The sons and daughters of Bolivar will once again demonstrate our unwavering will. We will win!”.

This is the tweet with which the president of the Bolivarian Republic of Venezuela, Nicola Maduro, at 6.22 pm local time (GMT -4, 0.22 in Italy) spreads an official statement of the Government in reference to the umpteenth electric blackout occurred at 16.45 yesterday, Monday 22 July, which re-presents the nightmare experienced by the country in last March and April. 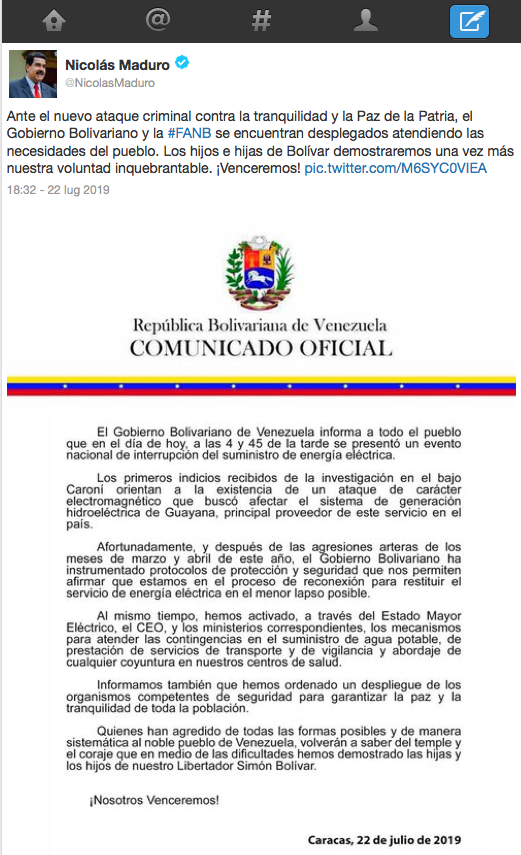 Just when the chances of the coup by Juan Guaidò, the self-proclaimed interim president recognized by the US and other countries allied to the regime-change, seemed to be nil here is a new incident, considered a highly technological sabotage from Caracas, immediately exploited by the coupist to accuse President Maduro of being unable to administer the nation and incite the people to protest again.

The Minister of Communication and Information, Jorge Rodríguez, reported that the electrical failure that hit the Capital District and 23 states was caused by an electromagnetic attack. And reported that the Maduro Government is working to return the service as soon as possible.

“The first indications received from the survey indicate the existence of an electromagnetic attack that tried to hit the hydroelectric generation system of Guayana, the main provider of this service in the country,” said the minister to the state channel of the VTV Venezelana de Television .

The government, explained Rodríguez, has activated protocols of “protection and security” which allow us to affirm that we are about to reconnect in order to restore the electricity service in the shortest possible time”.

He also informed about emergency plans for drinking water supply, which is interrupted every time a blackout occurs; for the provision of public transport services; maintain functioning in hospitals and strengthen road safety with greater vigilance.

“Fortunately, and after the ingenious attacks of the months of March and April of this year, the Bolivarian Government has equipped itself with protocols of protection and security that allow us to affirm that we are in the process of reconnection to restore the electricity service in the minor possible time  – it was written in an official statement – Those who have attacked Venezuelan nobles people in all matters and in a systematic way will know once again of the temperament and courage that stand in the way of the difficulties I have shown to my daughters and children of our liberator Simon Bolivar ».

Instead Juan Guaidó, ratified for this tuesday, July 23, the Nartional Assembly ordinary session that will take place from 10:00 a.m. m. in the Alfredo Sadel square, of Las Mercedes, in Caracas. “Tomorrow, with force, we are going to the assembly on the street. We Venezuelans will not get used to this disaster,” he wrote on Twitter about the national blackout on monday. The president denounced the inefficiency of the regime of Nicolás Maduro and indicated him as the main actor in the destruction of the country’s electrical system.

Last spring, President Maduro and his ministers had bluntly accused the United States of America of terrorism, demonstrating that the cyber attacks had started from the United States: Us Army has many sectors specialized in cyber warfare such as Cyber ​​Command ( CyberCom) based in Fort George G. Meade, Maryland and the Enterprise Techonology Command Network (NetCom) of Fort Huachuca, Arizona.

The first blackouts in March and April had caused very serious inconveniences in some hospitals with the death of about 30 patients due to the lack of generators or their faulty operation. The most borderline states of the country had remained without drinking water, due to the blockage of the water pumps, even for about ten days, forcing the population to draw it from the rivers with serious sanitary risks.

More than 150 attacks on the electricity network had been recorded between electromagnetic-cybernetic and physical attacks with explosions and fires, even in the main substation in Caracas where three transformers burned all night on March 11 following an attack.

The obvious sabotage had prompted the Venezuelan attorney general, Tarek William Saab, to launch an investigation against Juan Guaidó, deputy of the National Assembly in office since 2016, for his alleged involvement in the sabotage of the electricity system.

“I assure you that the cybernetic attack against the Venezuelan people has been carried out with a technology that has only the government of the EEUU (Estados Unidos – Usa) – the president of Maduro ruled in an official statement on march – You cannot invoke the political struggle to attack the electrical system, take away the tranquility and the right to life to millions of Venezuelans. It’s called an electric criminal coup. It’s a serious violation of human rights! ”