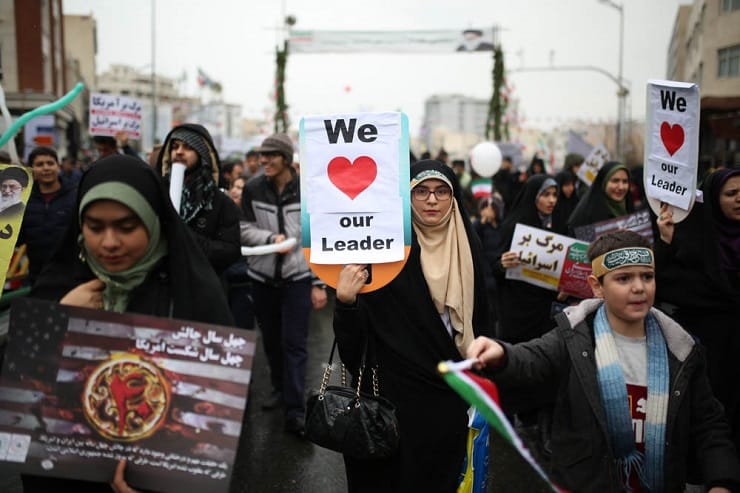 [ Editor’s note: Andre takes a detour from his usual geopolitical writing to make a personal appeal for public support for the Iranian people with the politics stripped away.

I can concur with his general description of the Iranian people with my having only one trip there. After the New Horizon conference last year, we were split into small groups to go to a number of Iranian cities on speaking tours designed to meet a wide cross-section of the people.

And by speaking I do not mean lecturing, or just giving our views, but listening to theirs. They had questions galore, with the most common being why do Americans fear a threat from Iran when it has done nothing to deserve it.

On the contrary I heard over and over what was done to them during the Iran-Iraq war, where the US supported Saddam’s use of chemical weapons against them, but Iran never retaliated against the American people for it, which was a good point.

I had no answer for them other than the American people were powerless to control our Deep State, and we are victims in this charade, also, but in a different way. We watch our national debt balloon, with the war profits going into the pockets of the banksters.

Americans could learn a lot from Iranians on a personal level, but alas, few will have the opportunity due the continued manufactured hostile environment.

I long for the day to able to spend a month as a tourist there to see the ancient culture, the museums, and enjoy their medical tourism. But political and government hurdles are being thrown in the way to prevent that, an indication that our Deep State fears person to person interaction.

They know it threatens to blow the cover on their Iran fake boogeyman construct, in which they have invested so much. But we will not be willing victims, along for the ride as spectators only… Jim W. Dean ]

Why Should Iran be Cherished and Defended?

As I pen this short essay, Iran is standing against the mightiest nation on earth. It is facing tremendous danger; of annihilation even, if the world does not wake up fast, and rush to its rescue.

Stunning Iranian cities are in danger, but above all, its people: proud and beautiful, creative, formed by one of the oldest and deepest cultures on earth.

This is a reminder to the world: Iran may be bombed, devastated and injured terribly, for absolutely no reason. I repeat: there is zero rational reason for attacking Iran.

Iran has never attacked anyone. It has done nothing bad to the United States, to the United Kingdom, or even to those countries that want to destroy it immediately: Saudi Arabia and Israel.

Its only ‘crime’ is that it helped devastated Syria. And that it seriously stands by Palestine. And that it came to the rescue of many far away nations, like Cuba and Venezuela, when they were in awful need.

I am trying to choose the simplest words. No need for pirouettes and intellectual exercises.

Thousands, millions of Iranians may soon die, simply because a psychopath who is currently occupying the White House wants to humiliate his predecessor, who signed the nuclear deal. This information was leaked by his own staff. This is not about who is a bigger gangster. It is about the horrible fact that antagonizing Iran has absolutely nothing to do with Iran itself.

Which brings the question to my mind: in what world are we really living? Could this be tolerable?

Can the world just stand by, idly, and watch how one of the greatest countries on earth gets violated by aggressive, brutal forces, without any justification?

I love Iran! I love its cinema, poetry, food. I love Teheran. And I love the Iranian people with their polite, educated flair. I love their thinkers. I don’t want anything bad to happen to them.

You know, you were of course never told by the Western media, but Iran is a socialist country. It professes a system that could be defined as “socialism with Iranian characteristics”. Like China, Iran is one of the most ancient nations on earth, and it is perfectly capable of creating and developing its own economic and social system.

Iran is an extremely successful nation. Despite the embargoes and terrible intimidation from the West, it still sits at the threshold of the “Very high human development”, defined by UNDP; well above such darlings of the West as Ukraine, Colombia or Thailand.

It clearly has an internationalist spirit: it shows great solidarity with the countries that are being battered by Western imperialism, including those in Latin America.

I have no religion. In Iran, most of the people do. They are Shi’a Muslims. So what? I do not insist that everyone thinks like me. And my Iranian friends, comrades, brothers and sisters have never insisted that I feel or think the same way as they do. They are not fanatics, and they do not make people who are not like them, feel excluded.

We are different and yet so similar. We fight for a better world. We are internationalists. We respect each other. We respect others.

Iran does not want to conquer anyone. But when its friends are attacked, it offers a helping hand. Like to Syria.

In the past, it was colonized by the West, and its democratic government was overthrown, in 1953, simply because it wanted to use its natural resources for improving the lives of its people. The morbid dictatorship of Shah Pahlavi was installed from abroad. And then, later, again, a terrible war unleashed against Iran by Iraq, with the full and candid support of the West.

I promised to make this essay short. There is no time for long litanies. And in fact, this is not really an essay at all: it is an appeal.

As this goes to print, many people in Iran are anxious. They do not understand what they have done to deserve this; the sanctions, the US aircraft carriers sailing near their shores, and deadly B-52s deployed only dozens of miles away.

Iranians are brave, proud people. If confronted, if attacked, they will fight. And they will die with dignity, if there is no other alternative. But why? Why should they fight and why should they die?

Those of you, my readers, living in the West: Study; study quickly.

Then ask this question to your government: “What is the reason for this terrible scenario?”

Look at the faces of the people. Do not allow this to happen. Do not permit psychopathic reasoning to ruin millions of lives.

There was no real reason for the wars against Iraq, Afghanistan, Libya and Syria. The West perpetrated the most terrible imperialist interventions, ruining entire nations.

But Iran – it all goes one step further. It’s a total lack of logic and accountability on the part of the West.

Here, I declare my full support to the people of Iran, and to the country that has been giving countless cultural treasures to the world, for millennia.

It is because I have doubts that if Iran is destroyed, the human race could survive.