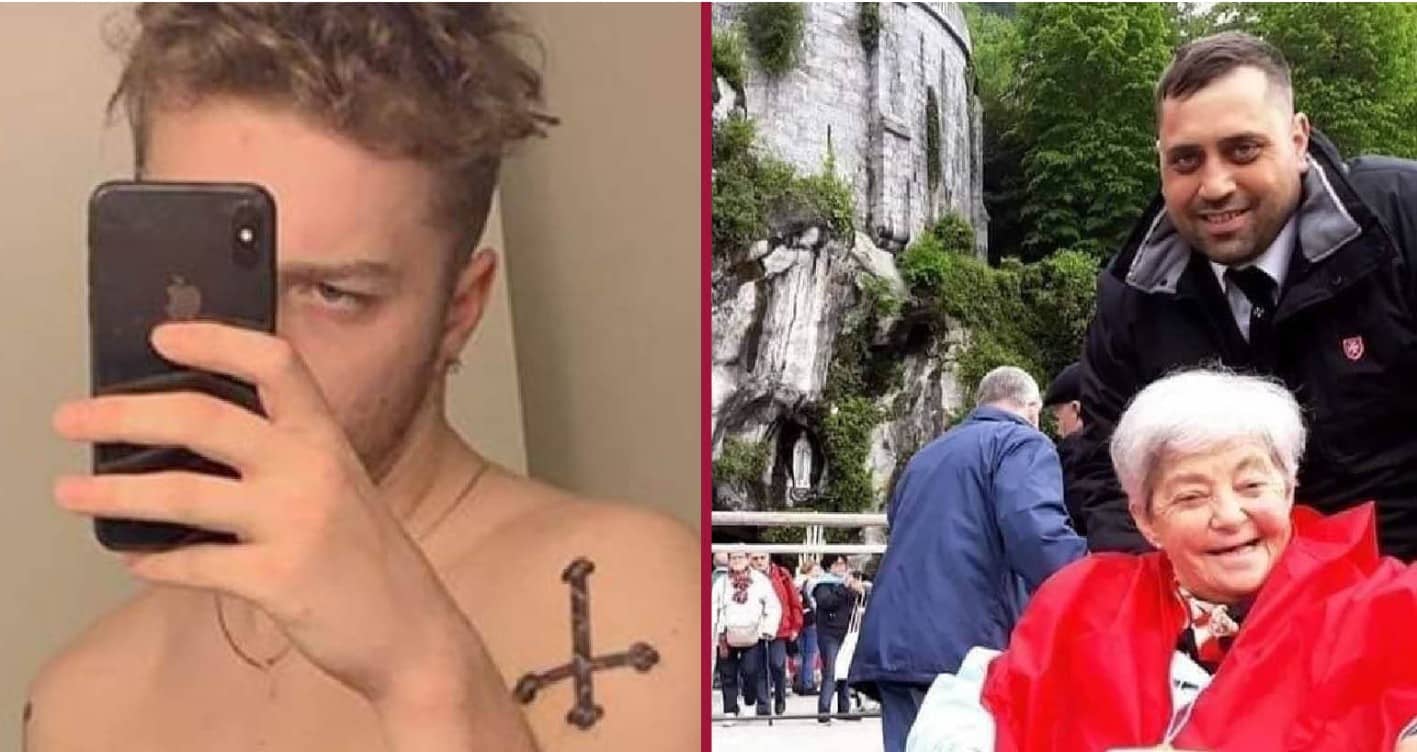 There are far more eloquent images of a bandaged criminal for five minutes in the barracks . They are those of a murderer and his victim. Perhaps only these photos can explain why one managed to be executioner and the other fell a martyr in his work to protect legality.

I am sure that if Mario Cerciello Rega, an excellent and burly deputy police sergeant, had faced his assassin Finnegan Lee Elder in a fair fight, the battle would have lasted a few minutes and the military would have overwhelmed his opponent.

Unfortunately this was not the case. Because Mario was a holy man while his attacker a demon-possessed man who attacked him with treason. And whoever believes in God, and in the supernatural that derives from it, knows that certain dramatic events also happen to awaken sleeping consciences or even worse, narcotized by material well-being that kills every spiritual instinct.

The absurd story of the assassination of the carabiniere of Rome is all in two photographs: that of Finnegan with the tattoo on the shoulder of the inverted cross, the emblem of Satanism, Mario’s as he pushes the wheelchair of an old quadriplegic to the sanctuary of Lourdes, where the Madonna appeared to the shepherdess Bernadette Soubirous in 1858 and where 70 miraculous healings were certified by the Scientific Medical Committee .

Only this can explain why a spoiled and boring potassium, probably altered by psychiatric drugs and by the lack of cocaine dose, sought after and not found for the “pack” of the pusher that sold him tachypirine pested, he managed to buckle 11 stabbings to a brave soldier of the weapon. The judges and the experts will demonstrate the murderous madness of the boy who struck the body of the carabiniere repetitively until the latter gave up the grip with which he had seized the suspect of extortion.

But who, like me, has been following the black chronicle for thirty years knows very well that fatality, or better still, divine predistination, overcomes all human logic and interpretation where life or death is at stake. The tragic story of this hero of the Meritorious, excellent in the profession as in his private life, is an example.

Mario helped needy people. He made pilgrimages to Lourdes, Loreto and also to Medjugorje assisting disadvantaged people, demonstrating a Christian faith not only conceived and felt but also lived and shared. He also received a commendation for having accompanied a child in difficulty to the Bambino Gesù Hospital in Rome

And this is also the only consolation that remains for his young widow, for her family, for her friends and colleagues with the Alamari: that of knowing that her death was not in vain but serves to show that in the world c ‘every day, even more than in apocalyptic TV series, the struggle between good and evil, between light and darkness.

THE CARABINIERE TRUCIDATED FROM THE CALIFORNIAN WITH 11 BOXES

Finnegan will be able to come up with a thousand justifications, even legally acceptable, but it already smells of a black and dirty soul. Originally from San Francisco, he attended Santa Barbara City College and graduated from Tamalpais High School in Mill Valley, California, in 2018. In the past he also studied at the Catholic high school of the Sacred Heart Cathedral where he served on the football team of ‘according to the KGO site cited by Heavy.com) before leaving it to complete studies in the other college. There he made friends with Gabriel Christian Natale-Hjorth.

On various sites some friends have described them as dissolute, easy to drunk from drugs or alcohol but also irascible and violent. Finnegan joined his friend in Rome who was in Italy to visit some distant relatives. Both came from wealthy families and allowed themselves the luxury of staying in a 4-star hotel in Rome for 200 euros per night: Le Meridien Visconti in Via Cesi where, after the brutal crime, they were then tracked down by the Carabinieri thanks to video surveillance cameras that he had fled again

But Elder had already left the US with bad intentions: who would ever pack a Trench knife ka-bar Camillus, an assault dagger used by the US Marines with an 18cm blade? While speculation is wasted on how the forbidden white weapon could pass controls at the airport, the fact remains that the 19-year-old Californian had a predisposition to aggression. Exploded after the scam in the purchase of cocaine then not revealed as such. The pickpocketing, the contact with the pusher for the extortion attempt were not aimed at the 100 euros that certainly were not lacking for the two young Americans of a good family: but probably only to have the dose of drugs of which they felt a haunting and tremendous need.

Destiny put him in front of the deputy sergeants Cerciello Rega. An exemplary carabiniere, perhaps too good to do a job that today, on the street, as the US chronicle teaches, rewards those who attack and shoot first. The carabiniere was in any case an expert: he blocked the boy after qualifying, as reiterated by the magistrate of Rome in the validation order of the arrest of the two Americans. There is not the slightest doubt that Cerciello and his colleague, despite being in plain clothes as any surprise operation needs, have qualified by showing the Arma card.

But in the gloomy spirit of the Californian boy already a powerful evil force was agitated: able to make him buckle 11 stabs in a few moments, until the soldier who had taken him by the arm to restrain him and identify him did not fall to the ground shouting ‘They stabbed me “.

In his satanic madness Finnegan has perfectly fulfilled the ancient adage that the devil makes the pots but not the lid: instead of throwing the murder weapon into which manhole or trash can thus erasing the main body of the crime he left his friend Gabriel, and therefore an accomplice, hid her in the false ceiling of the room of the luxurious hotel where they were staying. Where the skilful investigators of the Army have not struggled to find it.

Thus ends the horrible story of a Satanist boy, perhaps by chance or perhaps out of conviction, with the inverted cross tattooed on his skin and a carabiniere devoted to the Virgin Mary who in the eyes of the many friends and faithful who packed the church of Santa Croce in Somma Vesuviana has certainly earned the Paradise for Eternity for his last farewell.

A little consolation for the young widow Rosa, her friends and all of us who mourn her loss the splendid aphorism of the Lebanese Christian poet Gibran Kahlil Gibran: “A funeral among men is perhaps a wedding feast among the angels”.