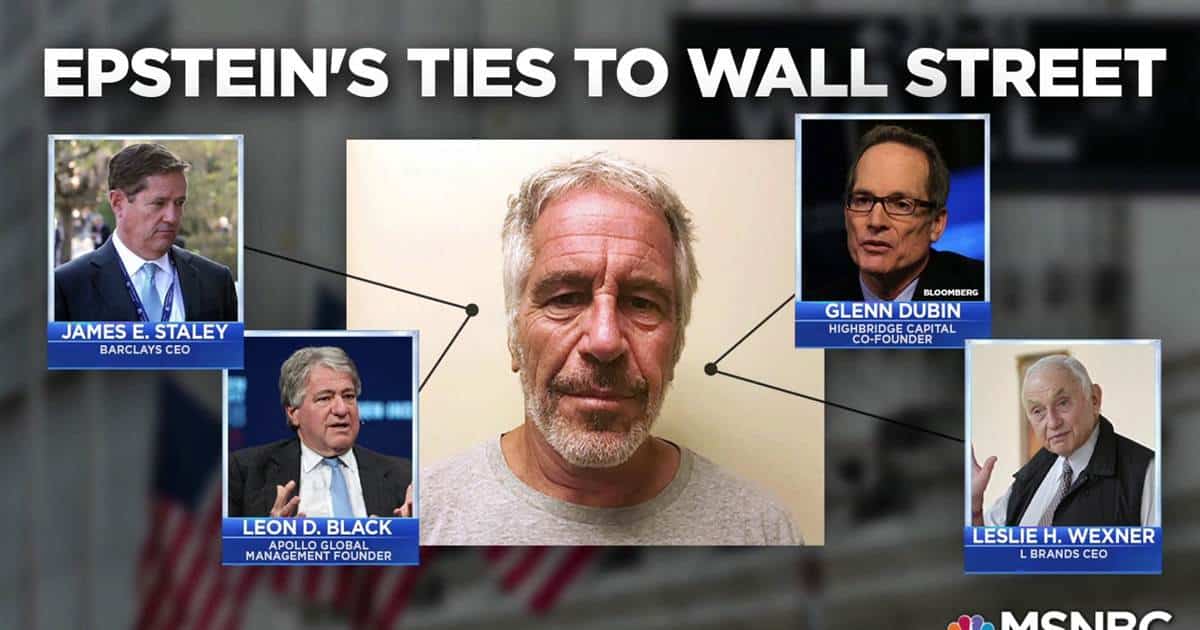 If you don’t think that top Wall Street gangsters and thugs don’t have a vested interest in seeing Jeffrey Epstein dead, then think again. The New York Times itself reported about a week ago:

“When Jeffrey Epstein was serving time in Florida for soliciting prostitution from a minor, he got a surprising visitor: James E. Staley, a top JPMorgan Chase executive and one of the highest-ranking figures on Wall Street.

“Mr. Staley had good reason to maintain his relationship with Mr. Epstein, who received him at his Palm Beach office, where he had been permitted to serve some of his 13-month sentence in 2008 and 2009. Over the years, Mr. Epstein had funneled dozens of wealthy clients to Mr. Staley and his bank….

“Mr. Epstein nonetheless managed to affix himself to a handful of prominent Wall Street veterans, including Mr. Staley, who is now chief executive of the British bank Barclays.

“Mr. Epstein provided personal tax services to Leon D. Black, whose Apollo Global Management is one of the world’s largest private-equity firms. He discussed a major investment idea with and entrusted millions of dollars to Glenn Dubin, who ran the hedge fund Highbridge Capital Management. And, with Mr. Staley, he laid some of the early groundwork for JPMorgan to make a major acquisition.

Don’t tell me that Wall Street gangsters aren’t implicated in the Epstein debacle. Some may not have a clue of what he was doing, but other powerful people obviously did know that he was a pedophile and was operating what seemed to be a Ponzi scheme. If Epstein goes to trial and provides a list of people who knew what he was doing, then Epstein is not going to be the only person to go to jail.

Mr. Epstein, we are pleading with you to provide that list. We certainly need to put those gangsters behind bars for the rest of their natural lives.