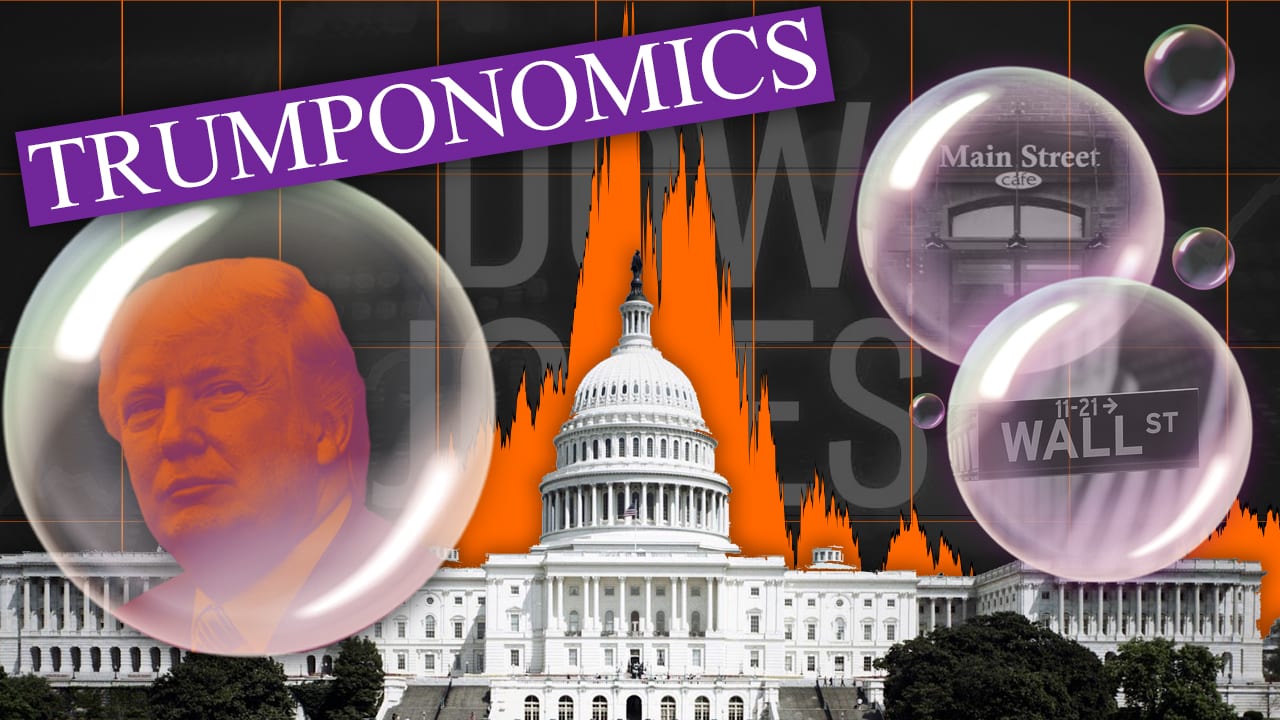 By way of introduction, it should be noted that the US economy is showing many signs of a classical bubble, starting with the incredibly over-valued US stock market. Only slightly more than a decade ago, at the peak of the real estate bubble, the Dow Jones Industrial Average (DJIA) barely managed to clear the 14,000 mark, before staging a spectacular plunge almost to 7,000. Since then DJIA nearly quadrupled in value, as of mid-July 2019 hovering at above the 27,000 mark. Since the US economy as a whole has not quadrupled during the same time interval, there is a clear dissociation between “Wall Street” and “Main Street” that will at some point inevitably lead to serious economic and political problems in the United States, to the point of considerably remaking its political landscape.  The proverbial $64,000 question, however, is when will the US financial house of cards come tumbling down the next time, and what will be the triggering event?

“Pay No Attention to the Man Behind the Curtain”

Politics is a factor in the management of the US financial system. The US Federal Reserve, though it is rarely perceived as having its finger on the scale of US presidential elections, played a role during the 2000 and 2008 presidential elections and its monetary policy decisions do impact day-to-day presidential approval ratings indirectly, through their influence on DJIA fluctuations. The Fed contributed to the financial bubble bursting by raising its lending rates on the eve of the election, and while its actions may be justified in terms of preventing an even bigger bubble, the timing of the raising of interest rates was such that it hurt the candidates of the incumbent parties (Al Gore in 2000, John McCain in 2008), thus facilitating a change of flag, as it were, in the White House. The 2008 election was particularly indicative of the power wielded by the Fed. It is all-but-forgotten that Obama-Biden’s nominating convention was a dud, while that of McCain-Palin was a success that gave the GOP team such a bounce in the polls that they were leading their Democratic opponents in the polls and provoking panic in Obama’s camp. Had Lehman Brothers not been allowed to fail, thus triggering a global financial meltdown, the outcome of the election may well have been very different.  However, on the eve of the 2016 election the Fed was very gun-shy when it came to raising interest rates—had it been as aggressive as it was in 2008, its monetary policy would have once again caused the grossly overvalued US stock market to crater, thus sending Trump into the White House with a far broader margin of victory than what he actually enjoyed.

Therefore the question should be framed in terms of whether Trump is long for this political world. Sturm und Drang emanating from the establishment media notwithstanding, it does appear as if Trump succeeded in appeasing enough of Washington’s power players, not the least of them being the “intelligence community”, to give himself a solid shot at a second term. House Speaker Nancy Pelosi intimated as much when she announced, to the annoyance of a sizable portion of her caucus, that impeachment was off the table. Robert Mueller’s failure to deliver impeachable goods on Trump also suggests that the “intelligence community” no longer views its ostensible Commander-in-Chief as a threat to its institutional interests. The de-facto purge of Trump’s foreign policy apparatus followed by the installation of neocons such as Mike Pompeo at State, John Bolton at the NSC, and the reliable military-industrial complex lobbyist and functionary Mike Esper at the DOD, was probably enough to ensure smooth feathers ruffled by Hillary Clinton’s unexpected defeat.

Toward a Managed Economy

If the preference is, as it appears to be, to not sabotage Trump’s re-election bid by triggering an economic crisis, one should not expect a major crisis in the US economy within the next two years, or until the outcome of the 2020 election is decided. Observing the ups and downs of the DJIA since Trump took office, one is left with the impression that the US financial institutions are acting as if there existed an invisible “safety net” to catch them in the event of the onset of a “bear market” or even a proverbial “black swan” event that could trigger a US-wide or even global financial meltdown. Whenever one sees the DJIA drop by several hundred points in a single day, or even a thousand points within a few days, one can rest assured the drop will be followed by a spectacular rise in the following days. In a remarkable reversal of course, considering that the US economy is officially still “booming”, the Federal Reserve itself no longer seems willing to be interested in raising rates.

It does not mean that the US economy is entirely out of the woods. Certain sectors of it, for example retail, oil fracking, or even sub-prime auto loans, may suffer waves of bankruptcies. Those enterprises which are vulnerable to Chinese counter-tariffs, starting with the US agri-businesses, will also fare poorly. But if the situation gets too severe, one can expect the US Congress to vote in favor of subsidies, and the financial sector can count on the Federal Reserve to keep it afloat, so that the mounting bankruptcies are extremely unlikely to affect the “too big too fail” banks, not anymore than they did following the 2008 housing crisis.

The financial sector, in particular, is being treated as a de-facto US strategic asset. On the one hand, economic warfare being waged by the US Department of Treasury through its ever-expanding list of sanctioned entities is taking bread out of US banks’ mouths. This happens not only through the loss of actual business with the sanctioned entities but also due to the slowly progressing process of “de-dollarization” which in the long term could become an existential threat to the US status as the dominant center of global finance. But the US banks have met this situation with equanimity, indicating they are some form of compensation for their troubles.

The one threat to the stability of US economy that the US government or Fed might not be able to deal with are the consequences of the US trade war against the rest of the world. Should it trigger a financial crisis elsewhere, for example in the EU or China, then the US would find itself in a severe recession once again. However, both EU and China are developing their own capacity for dealing with US-induced economic shocks, in that respect following Russia’s example.

Disaster Capitalism on the Horizon?

This idyllic stagnation in the US is unlikely to continue forever. There are still a number of issues the US oligarchy needs tackled, first and foremost of them being the Medicare and Social Security entitlement programs.  With even frontrunner Democrats like Joe Biden proclaiming, on the presidential campaign trail, no less, that “Medicare is gone”, one should expect “entitlement reform” to be on the agenda of a future administration or perhaps even of Trump’s second term. To achieve that objective, a little controlled chaos following a financial meltdown and a recession to set Americans against one another along racial and generational lines, could be very useful. But it does not appear likely such a scenario will be enacted before 2021 at the earliest.