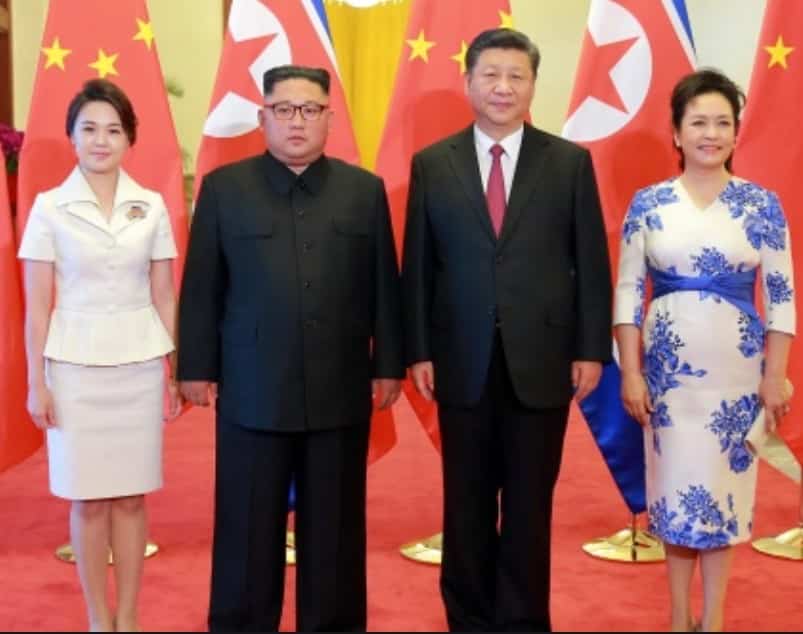 By Claudio Resta for VT

All warfare is based on deception.

I know this may sound a little bit smelling of paranoia, but we don’ t have to forget that the immortal ancient Chinese military treatise,The Art of War, remains the most influential strategy text in East Asia and it has also had an influence on Eastern and Western military thinking, business tactics, legal strategy and beyond. And still has.

And the statement I have quoted is not a single, casual and detached one but is the center, the fulcrum and the essence of its philosophy.

So in consideration of various other following reasons, we must assume that a nation like  North Korea, in some way a sort of puppet-nation of PRC may play the role of a political-military defiance actor to answer the economical challenge launched by the USA rise of tariffs against PRC.

My opinion grew up on the hypotesis that, despite all appearences and cliché, I didn’t think that a leader, even if so controversial, as Kim Jong Un, possibly could not be so self destructive to challenge the most armed superpower in the world, if he wouldn’t have covered shoulders, as, for instance,  a secret pact with China giving North Korea military support, protection and intelligence.

Then, the first of these reasons above mentioned is a quote by Putin, who sometimes speaks in a very oracular and hermetic way, disclosing little pieces of a truth that in the West is not anymore available, in spite of its  sacred cow and postulation of liberal democracy.

With no transparency at all, neither politically neutrality and objectivity of information, let me add.

I may be fool but I believe in such a Putin occasional statements, in which he talks as the earliest ancient Popes when they were speaking “ex cathedra” and therefore being infallible.  A long before the last Second Vatican Council.

I excuse me of such a long preamble and finally I can quote the statement of Putin that indirectly interest us that is: “There are not so many countries in the world that enjoy the privilege of sovereignty.” and probably North Korea is not one of them, I can add.

So we know that in the world many countries are still colonies, protectorates and vicekingdoms or as Putins says in a more contemporary (and diplomatic way), such  countries share a limited sovereignity. As an Italian I would have never had a doubt of it.We colony of US since the end of WWII, and recently of EU, too. I beg your pardon, this is a “voluntary” union.

Then everybody knows there are often many complex links and relationships between two different nations that both are sharing the privilege of sovereignity  or not, we may argue, of a very different size and even on different continents even besides their alliance, like the United States of America and Israel.

Then why North Korea couldn’t be a sort of special allied country of the Popular Republic of China?

In some way there is an analogy with the special alliance linking USA and Israel, probably much stronger.

And who knows, maybe perhaps in some way a wider secret alliance with Russia, too.

I don’t pretend this analogy to be perfect but at least allusive of a particular reality.

While the relationship between USA and Israel is a two ways one, the relationship between PRC and North Korea could be just a one way one, hierarchically defined in the sense that NK is just a puppet-nation of PRC as it  plays just the role of a political-military defiance actor to answer anytime to serious economical challenge launched by the USA against PRC, in this case the US rise of tariffs against PRC in the hidden and sneaky interest of China.

Then but why, you may ask? The purpose of this conspiracy would be in the case of any serious economical offence to PRC interests to possibly engage the United States in an eventual Vietnam-like war that cannot be won by the USA at least in a conventional way.

Here the analogy of the two Korean countries of today  with the two Vietnamese countries of the sixties is perfect. In both cases there is a North communist and a South capitalistic.

In both cases there was/is a strong link/alliance of the North communist of the two split Asian little country with China superpower big ally.

In both cases the people and the soldiers of  the Northern country, in a very different way from those of the richer Southern country but especially from the American soldiers, North Koreans  are forged by a poor life of privations and sacrifices,  that raised their moral strenght and spirit of self-sacrifice to a Spartan much higher level than its enemies (SK and USA).

I mean that South Korean soldiers and people are a little spoiled by their wealthier lifes even if they are not so spoiled as the US soldiers by a much easier domestic lif and so they all cannot have the capabilities of handling suffering of soldiers and people of North Korea (and eventually US military).

Not just this but even the strong totalitarian communist ideology of North Korean soldiers and people as a sort of religious fundamentalism raised their moral strenght and spirit of self-sacrifice to a much higher level than its enemies (SK and USA). I believe.

So a war of USA and eventually SK against NK would soon turn in a Vietnam- like guerrilla that cannot be won even by the much more rich arsenal of USA in terms of weapons,

But such war would turn in a useless huge loss of lifes, weapons, ammo, assets and money on both sides.

With the total destruction of South Korean capital assets that could not be defended in a valid way as being so close to the front of 38th parallel.

Another reason for PRC to pull the USA in an eventual war on Korean theater would be to make of NK a test bench of Chinese and Russian intelligence and weapon systems, machines and strategies against American ones.

That could be useful for the developing of such systems and strategies  in sight of future wars between America and Eurasia. If a future like this still will have a chance!

Now I want to report two arguments that may possibly turn the expected chances for the USA to win such a war in a likely defeat.

The possible sharing of satellite systems intelligence of countries that detain such resources like PRC and/or Russia with North Korea will play a key role in this war.

Then if such a war should be fought, because of the advanced state of art of technology of North Korea, its alliances or affinities with China and Russia, its proximity to PRC and to its “Lebenraum”, and also because of its Eastern culture and philosophy very different from ours (never forget The Art of War, Sun Tzu) I think it could lead to unforeseeable outcome.

It would be a very new and risky  war.

Think just if North Korea under an eventual  attack should use its nuclear weapons not against an useless conventional target but to cause a HANE (High altitude nuclear explosion) with its radiological effects on the electronics of complex weapon systems such as new generation contemporary attacking fighters and bombers for instance.

A test of a new type of war, nobody can predict the effects of such weapons in the change of a tactics war doctrine in a new one.

Such a chancy new possible Vietnam-like war would weaken politically, economically and financially the USA and, in this particular historic juncture, it could lead even to a change of paradigm and who knows even shorten the time to the passing of the torch of the Global Empire or at least of the economical and technological egemony  from the United States of America to the Popular Republic of China.

A big shift that, like it or not, I think it will near certainly unavoidably happen one day or another.

And this I think it is a big problem in itself, because it is very difficult if not absolutely possible, to guess anticipately how this big shift can happen in effects in a peaceful, orderly way, with no violence and the respect of the law and of constitutional guarantees.

And in the market stability, mainly of the store of values..

I hope to be wrong in this case, but in my personal prophecy, I am afraid the respect of all these conditions that should necessarily occur is not possible at all.