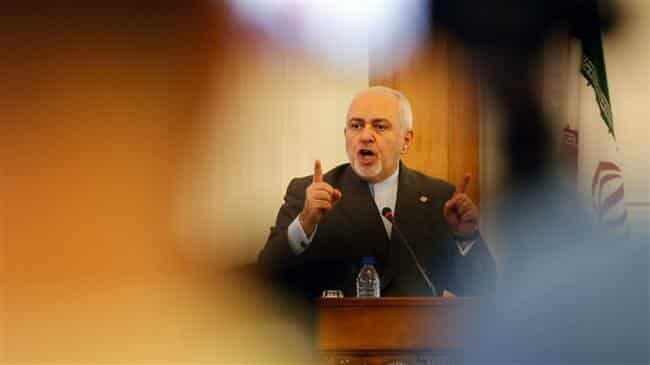 Is the US push to ban Zarif from social media a last gasp measure?

[ Editor’s Note: My vote is in. The US is running chicken as Zarif is wiping the floor with the US diplomatically. And whose fault is that? It is the US’s of course, who month after month throws off any pretense of accepted diplomatic decorum expected from a UN Security Council member.

Frankly I would ban the US from the UNSC simply for having reneged on the UNSC unanimous vote on the JCPOA. One of the failings of the founding of the UN and UNSC, is in not anticipating having to deal with a rogue member who renegs on its vote.

I am not advocating throwing the US out of the UN, now…but riddle me why a party that has broken its pact of standing behind unanimous UN votes be treated like all is well in Alice in Wonderland?

The current regime continues to humiliate the US in front of the entire world. Trump, “Pompus” and Bolton the Walrus should be booed wherever they show their faces in public, and it would not be rude to do so.

They have spat on all the rest of us and obviously see nothing wrong with doing so, so the least we can do is return the favor. Republicans as a group will lose respect for being so quiet about accepting all of this fake government.

And this is not a plug for the Dems, who have their own internal fratricide problems. That includes their own stand down on Israeli espionage in the country which not a single candidate nor the party have uttered a word as viewing it as a problem… Jim W. Dean ]

Iran’s Foreign Ministry spokesman says possible blocking of the social media accounts of the country’s Foreign Minister Mohammad Javad Zarif as a result of the recent US sanctions imposed on him, would not muffle his voice in international forums.

Speaking to reporters on Sunday, Abbas Mousavi pointed to the possibility of blocking the Iranian foreign minister’s social media accounts, especially on Twitter, where he has been a vociferous proclaimer and defender of Iran’s policies and positions on various international developments, noting that such a move “would cause his voice to be heard more loudly at international organizations.”

The Iranian Foreign Ministry spokesman said, “Zarif has verily been targeted with fury and rancor of those who are afraid of Iran’s voice being heard … and this is the reason why they have decided to block his access to US-based social media platforms.”

The Iranian Foreign Ministry spokesman’s remarks came after Mark Dubowitz, the CEO of the hawkish think-tank Foundation for Defense of Democracies whose ideas are believed to underlie many of Trump’s policies, took to his Twitter page on August 8, claiming that “Zarif should be immediately expelled for legal reasons … for using a platform like Twitter.”

Alluding to fallacious allegations by American authorities to be advocates of the freedom of speech and information, Mousavi said, “It will not surprise us if they take such a measure. However, Zarif’s voice in his capacity as the head of the Iranian diplomatic apparatus will definitely be heard by the entire world.”

‘No US talks until economic terrorism stopped’

Elsewhere in his remarks, Mousavi referred to his American counterpart’s recent remarks that US President Donald Trump is still waiting for a call from Iranian officials, noting, “They have been expecting the Islamic Republic to do this for a long time, but this is a futile expectation.”

“As long as America has not stopped its economic terrorism and exerting pressure [on the Iranian nation], the Islamic Republic will enter into no talks [with the United States],” the Iranian diplomat said.

PressTV-Zarif to US: Economic terrorism, talks don’t go together

Foreign Minister Zarif says Tehran will not hold any negotiations with Washington until it stops its “economic terrorism” against the Iranian people.

Pointing to the fact that no one with common sense would ever engage in talks under such circumstances, Mousavi said, “The Islamic Republic has a powerful government and nation and will try to give powerful voice to its positions, while Americans have proved time and again that they lack honesty.”

The spokesman said confusion in the US foreign policy is indicative of the fact that they are not honest when declaring their positions and this is why the Islamic Republic does not care much about what they say.

In a report back in May, the CNN said the White House had contacted Swiss authorities to share a telephone number with Iran in hopes that Tehran would contact Trump.

Citing an unknown source, the broadcaster said, however, that Iran was “highly unlikely” to demand the number from Swiss authorities. The development came a year after Trump pulled the US out of the 2015 Iran nuclear deal, known as the Joint Comprehensive Plan of Action (JCPOA), claiming that it was a bad deal.

Trump unilaterally withdrew the US from the international deal and unleashed the “toughest ever” sanctions against Tehran in defiance of global criticism, notably targeting the Iranian energy sector.

In April, the White House terminated sanctions waivers for major buyers of crude from the Islamic Republic in an attempt to bring Iran’s oil exports to “zero.” Washington has also been building up its military presence in the Middle East under the pretext of ‘Iranian threats.’

In May, Washington announced a highly provocative plan to dispatch military reinforcements to the Middle East, citing an unspecified Iranian threat. Later, however, Trump toned down his highly belligerent rhetoric against Iran and repeated, on several occasions, an offer of talks to Tehran.