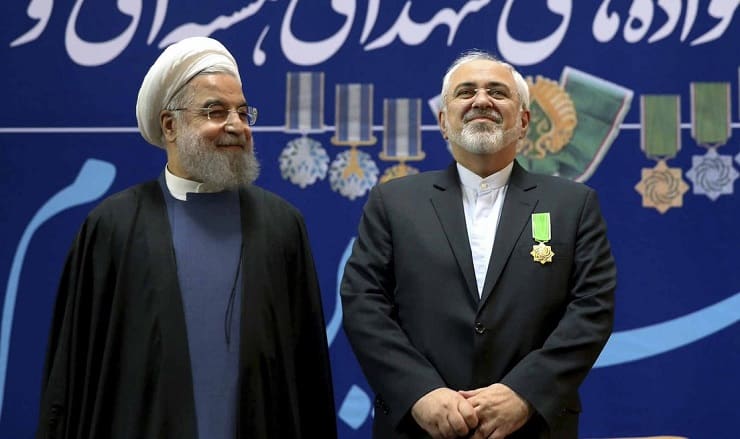 [ Editor’s Note: I published a similar article on this theme today on VT, Is the US running scared of Iran? Rafi Sheikh and I were reading the same tea leaves. But this was not a topic to sit on for a few days. After all, we are now trying to enlist Australia to send ships to defend the Persian Gulf.

For the US to sanction a foreign minister for doing the job of presenting his country’s positions as forcefully and clearly as he can, it has crossed over into the diplomatic hooliganism dark side.

Zarif goes from getting a secret meeting offer from the White House, which of course he could not accept, as that would fly in the face of Iran’s policy of “no negotiation until Trump returns to the JCPOA or rescinds the sanctions”. Out of embarrassment, some knucklehead at the White House, maybe Bolton, gets the bright idea that “we will sanction him”, a foreign minister, to “put da fear in ’em”, as they say in the South.

Now the US holds itself above and apart from long practiced diplomatic protocols if it does not get its way. VT has warned that unipolarism was extremely dangerous because it accepts no bounds of behavior, past or present. But it reserves that privilege only for itself.

VT’s Gordon Duff has long editorialized how major criminal elements brought their big money into big politics long ago, not only for self-defense reasons, but also because that is where the big money is in terms of having a national budget to loot from the inside.

Outsiders thought this was just a ploy to pull readership, but VT has published example after example to prove its case, with the long running Epstein blackmail case being a current example.

We have used the gangster term in describing how these uber-NeoCon people operate. And with Zarif we have the perfect example of “We’ll give ya an offer that you can’t refuse”. Zarif refused. They aren’t making it up. It’s who they really are — diplomatic gangsters. We deserve better, so the question is, how do we get it… Jim W. Dean ]

The US president Donald Trump has managed to fulfill many of his election campaign promises – scrapping TPP deal, Paris climate agreement, scrapping the Iran nuke-deal, ending the Afghan war, building a wall on the US-Mexico border.

Even though we may disagree with his promises and some of them are extremely controversial in their nature, on top of being purely unilateral, the fact that Trump did fulfill his campaign promises speaks volumes about the lengths he can go to fulfill the remaining promises – particularly, Iran’s subjugation.

Perhaps, it the only one that has proven to be too tough for Trump, thanks to Iran’s resistance and the support it continues to receive from the two of America’s strongest strategic competitors: China and Russia.

The US president, therefore, is desperate to deliver on this promise and is working on a multi-dimensional policy, ranging from provoking military clashes in the Gulf and pushing other countries into a conflict with Iran to secretly convince the Iranians of negotiations, and to re-imposing sanctions. A remarkable show of desperation prevailing in the White House!

This desperation stems primarily from the Iranian refusal to accept US terms, and it grows out of Washington’s inability to force Iran into capitulation. To achieve the purpose through ‘other’ means, the US secretly invited, according to reports in the Western media, Iranian foreign minister to visit the White House to have a meeting with the US president.

Iran refused this invitation, leading to Washington’s decision to sanction the sitting Iranian foreign minister as well. According to reports, “President Trump has been very open that he is ready to speak to the senior leadership in Tehran and that he has certainly not prevented any of our friends or allies from communicating with them as well.”

Tehran did obviously refuse this offer, leaving the US with little options on the table. The manoeuvre, according to the said report, was to offer Iran Section 123 of the United States Atomic Energy Act of 1954,  and make Tehran say no in a bid to show the Europeans  just how stubborn Iran continues to be. Sensing the trap, Iran refused to send their FM to the White House, which resulted in the US introducing sanctions against Zarif.

Accordingly, the same Zarif that the US was trying to have in the White House a month ago was designated on July 31st. The statement issued by the US department of state calls Zarif,

While nothing in this statement really conflicts with what Zarif, as Iran’s FM, is actually supposed to do, what this statement and the sanctions do reflect that the US foreign policy has practically exhausted all options and can only rely on sanctioning Iranian officials one by one, a policy that would hardly serve US interests in any positive manner or bring the two countries any closer, leading to talks on deescalation in the Gulf.

On the contrary, by sanctioning Zarif, a highly seasoned diplomat who received his higher education in the US, Washington is only blocking his entry in the US, particularly terminating his presence at the UN sessions, in bid to block Tehran’s narrative from going world-wide.

Elsewhere, Iran continues to push-back against the US allies, mending its ties with as strong US allies as even the UAE, thanks again to Zarif’s seasoned diplomacy, which has already led the UAE to change, largely in agreement with Tehran, its Yemen policy.

Accordingly, while still a member of the Saudi coalition, the UAE did (apparently) withdrew its forces from certain parts of Yemen after Zarif told reported that Tehran and the USE were “willing” to get in touch with each other and develop the kind of relations Tehran has with other Arab countries.

This comes in addition to the support that Tehran continues to receive from its strongest allies. While China continues to buy Iranian oil, Russia has unmistakably said that Iran remains its ally. Ironically enough, it was Russian National Security Council Secretary Nikolai Patrushev who made this announced at the recently held US, Russia and Israel summit in Jerusalem. To quote him,

“Iran has always been and remains our ally and partner, with which we are consistently developing relations both on a bilateral basis and within multilateral formats.”

This has since then been followed by Russia advancing a new concept of collective security for the Persian Gulf, a system of security that would involve parties from within and outside the region. By thus advancing a kind of a security system, Russia is obviously inserting itself more deeply into the Gulf as a means to shrink the space for the U.S. to manufacture another war.

Iran, therefore, remains strong both diplomatically and strategically, causing the US to face utter desperation despite its superior military power. Accordingly, if it comes to re-negotiations with Tehran at any time, it will primarily be based upon Iran’s terms as outlined by Zarif in his meeting with the US senators than those of the US. More desperation is to follow.