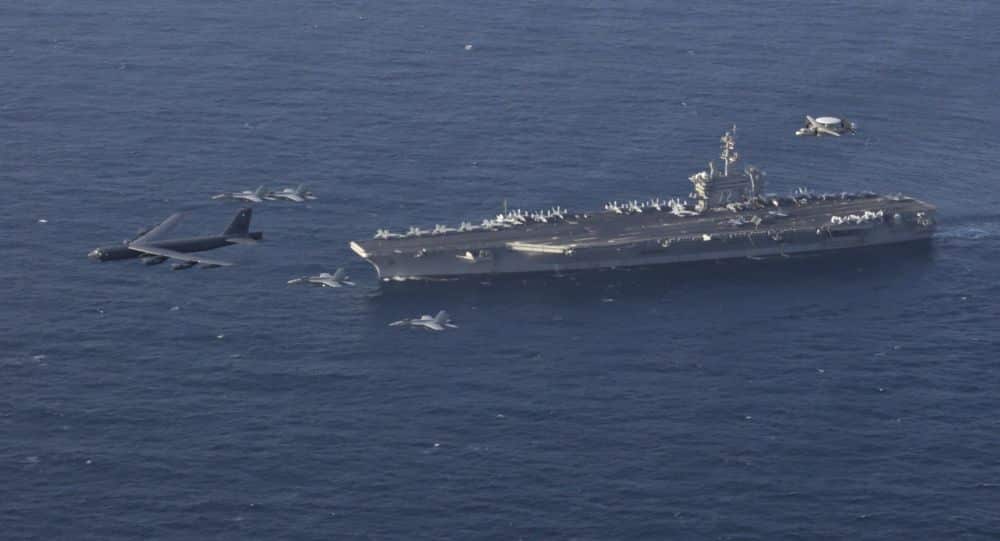 [ Editor’s Note: It is sad to see the US navy trying to put a good face on a bad mission. But at the end of the day all big ticket defense instruments are not about to pass up an opportunity to justify their budgets. They feel they have an obligation to do so.

The question I would ask them is, “Is is patriotic?” Admiral Boyle uses carefully chosen words thought to be bullet proof, that his ship is there for deterrence, which he did not need to tell us as we figured that out.

But he goes further in saying that he would engage in offensive operations if ordered to do so. That blew his cover.

First we have to ask why his ship needs to be there to defend when it obviously does not.  The US poured $50 billion in arms sales into the region last year, with plenty more in the pipeline. The US has plenty of bases in planes galore in the region, way more than Iran has.

And what are all of these arms for, to defend against the impending sea or parachute invasion by Iran? Hardly. They are there for offensive purposes, to be used when the time is right.

What the Abraham Lincoln is doing would be to defend against Iran responding to a first strike by the US, after the suitable false flag attack, with the number one choice being a US navy ship to have all the vet orgs screaming for a counter strike.

The US government has already flea trained almost everybody to accept its never providing proof of its Iran attack/threat claims as the new normal. We just saw this in the Persian Gulf tanker bombings, where even the UAE countered the US position that Iran was responsible.

It is a fake threat, pure and simple. Iran has not built an invade and hold captured countries capacity into its military structure. If they secretly have, someone please enlighten me.

On the other side we have now a consistent pattern of US claims of Iranian aggression, with no proof offered, time and again, as cover for its offensive deployment.

The Navy admirals are not stupid. They know the game being played in the Gulf to create a justification for our forces being there. The admirals know they are goosing the threat, lying to the America people, on the grounds that that is good for America. I, VT would challenge them to open debate on that, and they would not do to well.

Resources spent defending against fake threats are wasted resources, except for the pockets that are lined by the wasted expenditures. I don’t see this as enhancing US security, but rather just the opposite. So who is more patriotic? Let me know what you think in the comments… Jim W. Dean ]

The United States deployed the USS Abraham Lincoln aircraft carrier strike group and a bomber task force to the Persian Gulf in May, in what National Security Adviser John Bolton described as a “clear and unmistakable” message to Iran that any attack on American interests or those of its allies would be met with “unrelenting force“.

US officers on the USS Abraham Lincoln aircraft carrier, deployed at an American naval base in Bahrain along with some smaller vessels, claimed in an interview with Sky News that their mission is to deter Iran from striking US targets, but added that they were also ready to launch offensive strikes if ordered.

“A large part of deterrence is the readiness that backs that deterrence up. We are ready to defend the US and the US interests if called upon… My job is to be here, to be ready, to deter and to defend if required”, Rear Admiral Michael Boyle, commander of Carrier Strike Group 12, said.

The USS Abraham Lincoln was sent to the Middle East in May due to what Washington claimed was a “number of troubling and escalatory indications and warnings” from Iran. Despite the highly publicised deployment, the aircraft carrier has not passed through the Strait of Hormuz, a strategic waterway linking Mideast crude producers to crucial world markets.

“For our mission here, which is deterrence, we are in the place we need to be. The people in the know in Iran know that we are more of a deterrent here than we are in the Arabian Gulf because from this position we can reach them and they can’t reach us. In a boxer’s analogy we have got overreach from the spot where we are right now”, Boyle added.

According to Sky News, aircraft on the carrier were supposed to strike several Iranian targets in June when Tehran brought down a US spy drone, which it claimed had violated its airspace and ignored multiple warnings to leave the area.

At the time, President Donald Trump called off the retaliatory strikes just 10 minutes before it was set to be launched, explaining that the death of an estimated 150 Iranians was disproportionate to the loss of an unmanned aerial vehicle.

The drone incident was one of the many episodes contributing to the spike in US-Iran tensions: Washington has as well accused Tehran of being behind “sabotage attacks” on oil tankers off the UAE coast in mid-May and in the Gulf of Oman in early June, while Iran denied the allegations and urged the US to cease “warmongering” and “false flag” ops.

As a result, the United States has proposed to form an international maritime coaliton and invited several European countries, including Germany, France, and the UK, along with other nations, such as Japan, South Korea, and Australia, to join. While some of them have expressed unwillingness to take part in the initiative, the UK has signed up for the mission.