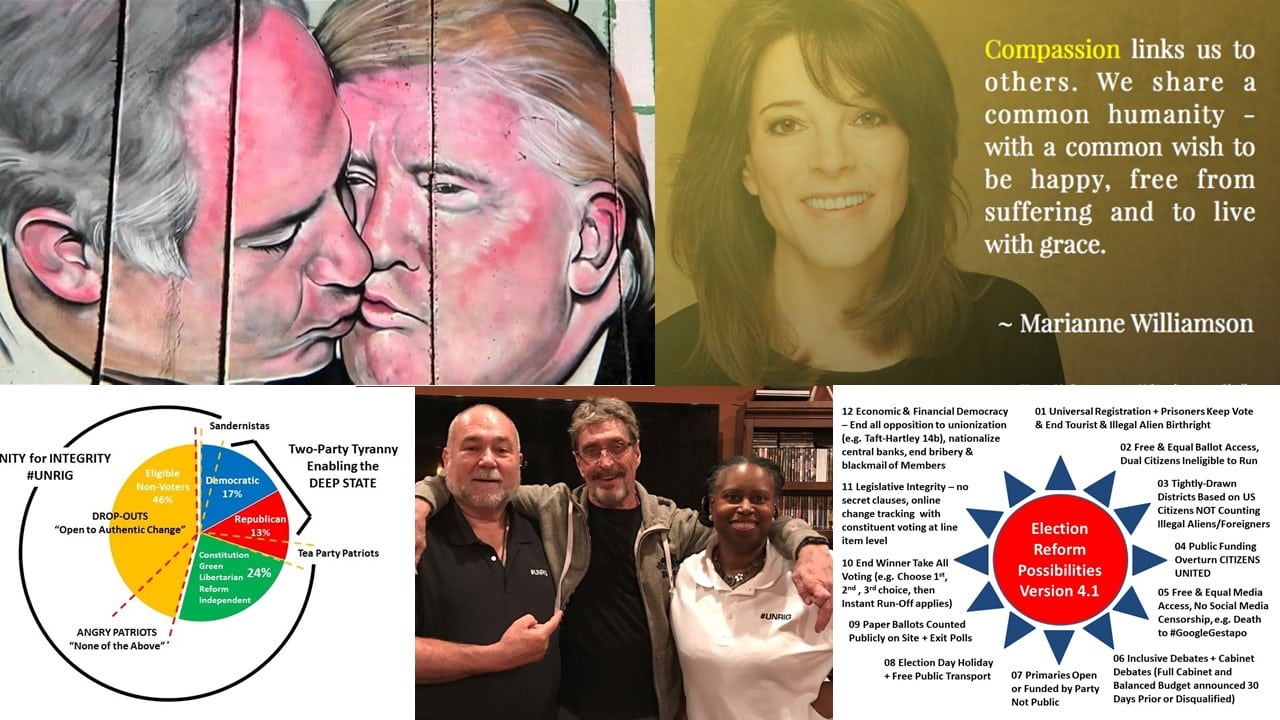 There are a tiny handful of people that I trust completely and rely on heavily for perspectives not achievable through the Mainstream Media (MSM) and the controlled social media (I coined the term #GoogleGestapo) that censors, manipulates (polls, trends, search terms), and digitally assassinates conservative voices. I value what Dave Bertrand does, along with the work of Gordon Duff, Caitlin Johnstone, Ben Fulford, and a few others.

For all of you are on the fence about Donald Trump for 2020, I want to say three things:

01 You are right to be concerned.  Although he still has my vote at this time, I have told him via the White House comment line that he is on probation.  He is not doing enough to defend the Constitution, especially the 1st Amendment that has been smashed by both #GoogleGestapo and 27 states making it a felony to criticize Israel; he has not fulfilled his primary promises with respect to 9/11 disclosure, leaving NATO, and withdrawing from the Middle East where we have spent $7 trillion and have nothing to show for it; and he has done NOTHING to reach out to the 70% of our eligible voters who are disenfranchised — the Independents, Libertarians, Greens, Sandernistas and #WalkAway, and Tea Party particularly.  His arrogance on this point is scaring me.

02 He has fourteen months in which to pull a series of rabbits out of the hat, and I believe he will begin doing that in September when I have been told to expect both a Global Currency Reset (including a gold-backed dollar and a $1.5 trillion bottom-up investment in US local economies and infrastructure), and full disclosure of the secret space program including the release of free energy which makes possible unlimited desalinated water. I am  told he is thinking about eliminating the IRS and the federal income tax in favor of the Automated Payment Transaction Tax that would apply to ALL transactions and particularly Wall Street currency and stock transactions — this will triple potential revenue while taking the tax burden of those of us that work for salaries. I am sticking with The Donald until 1 January 2020 and will make my final decision on that day.

03 There is something all of us can do to send him a strong message of concern. Donate a token amount to Marianne Williamson, the only authentic Democratic candidate, whose book A Politics of Love I have reviewed most favorably.  See my letter to the First Lady and the three book reviews within that letter, below. We need more of what Williamson is talking about — more love, more focus on citizen pain, less Yada Yada Yada. The Democratic Party is trying to smash both Williamson and Tulsi Gabbard with smear campaigns.  It is my view that it serves the President, the Republic, and each of us to get her into the third debate.

I will tell you that I am  thinking about how best to pressure the President into embracing #UNRIG (Unity with Integrity: Election Reform Act), at the second link is my personal message to the President as submitted via the White House comment line.  It’s time to put the public back into the government. I believe Donald Trump can and will do  this, but he needs some encouragement from us right now, and it is my believe that drop-kicking Williamson into the third debate is a helpful gesture by all of us.

Memorandum for the First Lady: Subject – A Politics of Love (the book and the author), you, your husband, and America UPDATE 1: Zionists Block Delivery of Mail

Therefore I urge you to donate, as I have, to the second link (watch out for default options, make sure it is a single donation not a recurring donation, and you can skip the stupid account creation and password demand). She is a catalyst for change.

Like all of you, I believe in “trust but verify.”  I have published a Trump Report Card by Paul Adams that is grounds for concern but I also believe Q and others I am hearing from, who assure me the President has a plan and will come through for us in defending the Constitution, ridding America of foreign parasites controlling our Congress with blackmail (see my reports on Epstein at http://tinyurl.com/Epstein-Not-Dead, http://tinyurl.com/Nine-Veils-Evil, and http://tinyurl.com/Mossad-Epstein). He needs a push on the #UNRIG front. Let’s let him know he is on probation with a token donation to Marianne Williamson.  Please.