[ Editor’s Note: This current move by Britain to de-escalate the ship snatching bungling that it got itself into at the behest of the US is showing that it was a dumb move on their part because there was no up side for Britain.

As the report below mentions, the Grace 1 Iranian tanker seizure, in hindsight, seems to have been a John Bolton type gaff by the White house to create the conditions needed to justify a NATO Neo-colonialist armada in the Persian Gulf “to protect it”.

Nobody bought that for a minute. But then the plan began to fall apart. The US could not find a coalition of the willing from its NATO partners other than Britain, who quickly had one of its own flagged ships seized.

The US had a major drone shot down with its course plot published by Iran showing that it indeed had made an incursion into Iranian airspace despite warnings not to do so. It the situation had been reversed the US would have shot down the Iranian drone.

All of a sudden the US Armada plan was not fun any more. The sad state of Britain’s navy due to budget constraints for the past five years has hardly put it in a position to play international enforcer, something cooler heads in Whitehall seem to have figured out.

And then the UAE put a bullet to the head of the whole circus by signing a security agreement with Iran for the Persian Gulf. In what seems to have been a desperate plan to save the original Western Armada plan the Israelis were pinged on sending some ships in, but they don’t really have any to send.

Tel Aviv also has its hands full with a dead on arrival peace plan, more settlement building, and a Syrian mess that does not look like it will be going away any time soon. Plus Congress just passed a resolution supporting a two-state Palestinian plan, much to the embarrassment of the Israelis and a big surprise to everyone else… Jim W. Dean ] 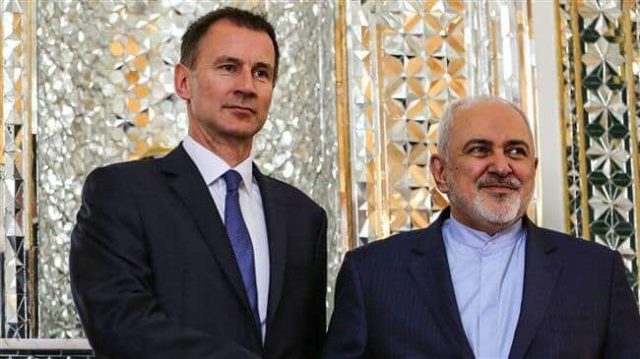 Iran’s Ports and Maritime Organization says Britain is expected to soon free an Iranian-owned oil tanker that it unlawfully seized last month off the coast of Gibraltar, after the two sides exchanged certain documents to pave the way for the supertanker’s release.

Speaking at a press conference on Tuesday, Jalil Eslami, the organization’s deputy head, said Tehran has been making efforts towards securing the release of oil tanker Grace 1, which was seized with a cargo of 2.1 million barrels of oil by UK marines in the Strait of Gibraltar on July.

The official said London had shown willingness to resolve the diplomatic dispute that has broken out between the two sides over the case, adding, “Certain documents have been exchanged, which would help settle the issue.”

“We hope that the problem will be resolved in the near future and that the ship can continue sailing with the flag of the Islamic Republic of Iran,” he said

Britain has claimed the Iranian-owned oil tanker was seized on suspicion of violating the European Union’s unilateral bans against Syria, but reports show the confiscation took place upon a call by the US.

Tehran rejected London’s claim that the tanker was heading to Syria, slamming the seizure as “maritime piracy.” The Iranian port official went on to say that the UK’s seizure of Grace 1 emanates from its “bias” and lacks true reasons.

Additionally on Tuesday, a spokesman for Gibraltar said the British overseas territory was seeking “to de-escalate issues arising since” the detention of Grace 1, Reuters reported.

Earlier, maritime security company Dryad Global had reported that Grace 1 had signaled a new destination of Morocco, but later removed the update. TankerTrackers.com also tweeted that the tanker had been signaling Morocco as its next destination after having spent 5 weeks in Gibraltar.

The Iranian official further defended Tehran’s confiscation on July 19 of the 30,000-tonne UK-flagged Stena Impero tanker, which was violating international maritime rules while passing through the Strait of Hormuz.

Esmaili said the UK and the US created hype around the confiscation, with Washington using it as a pretext to propose the formation a maritime coalition aimed at Iran, which the official said is doomed to failure.

The vessel had been involved in an accident with an Iranian fishing boat and had ignored its distress call, changing its route. It also switched off its tracking system and used the exit lane to enter the strategic strait.