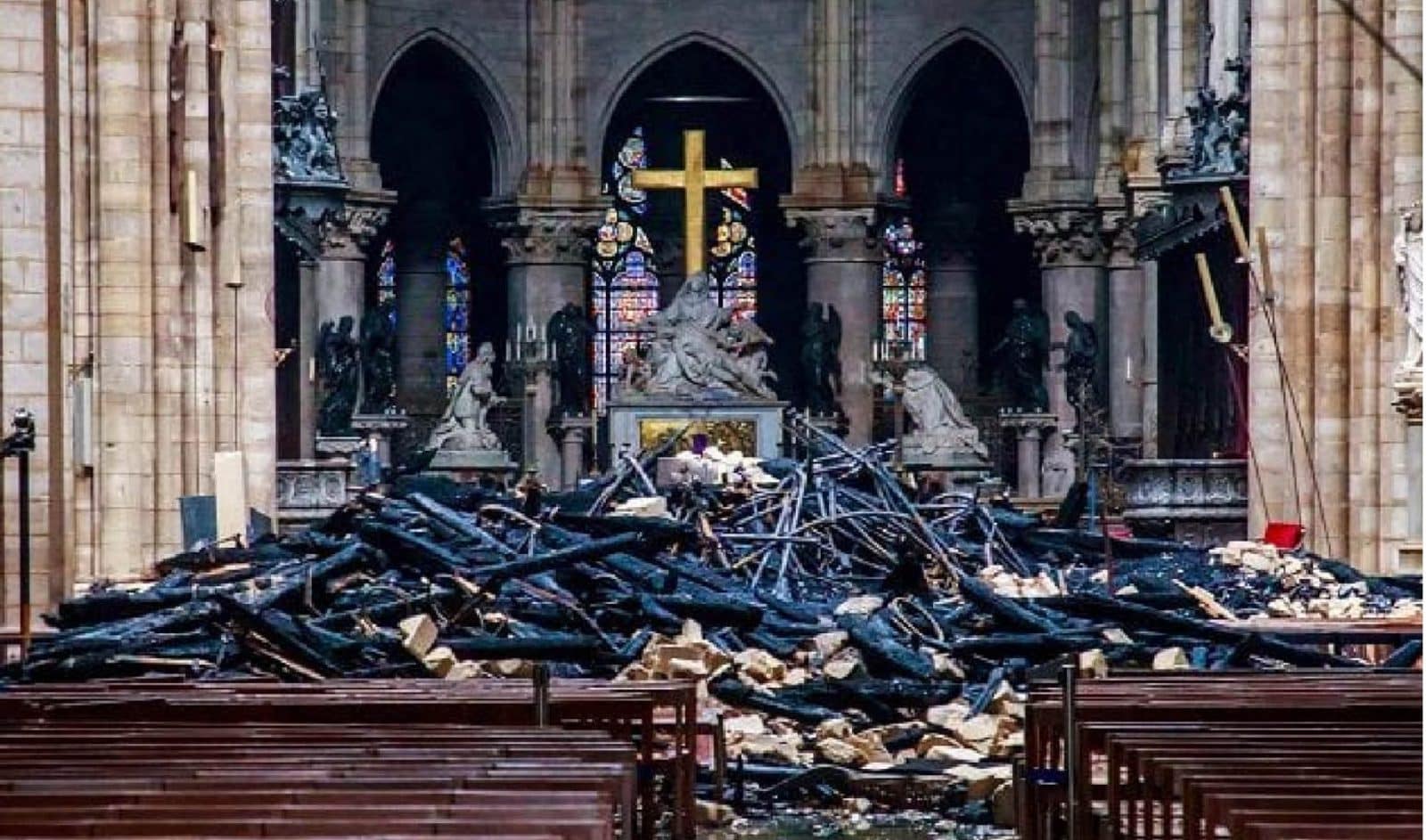 Four months after the terrible fire that devastated the Notre Dame Cathedral in Paris on April 15th, bringing down almost the entire ceiling and the historic spire with incalculable damages, the risk of collapse remains very high. This time it is not a journalistic inquiry like that of the New York Times that last July revealed how the basilica remained standing for a true miracle. It is the French Government in the person of the Culture Minister Franck Riester to launch an alarm supported by concrete facts.

“The Ministry of Culture announced on Wednesday 14 August that further stone artifacts have fallen from the vaults of the nave of Notre Dame during the recent heat wave that devastated the French capital – reports Russian Sputnik International in the last few hours – though Notre Dame de Paris is currently closed for lead decontamination, further concerns for the cathedral were raised after the French Ministry of Culture reported that the church is still at risk of collapse “.

In July the major international media reported the remarks of chief architect Philippe Villeneuve who had predicted that the fragile sacred building would be hit by the heat wave because it was still saturated with water due to the invasive as well as indispensable intervention of the firefighters to extinguish the giant fire of April 15th . While the judicial authority still investigates to clarify the exact causes here is a new emergency.

“I am very worried about the heat wave – Villeneuve declared on July 24 – What I fear is that the joints or the masonry, as they dry, lose their coherence, their cohesion and their structural qualities”. A fear that proved to be extremely grounded for the further collapses that occurred four months later as confirmed by the French Minister of Culture Franck Riester.

“The main danger lies in the combined action of heat and water currently trapped inside the walls and the vaults” Nikolaos Karydis, senior lecturer and architectural conservation expert at the University of Kent, also confirmed to Artnet News .

The water inside the vaults is a combination of what was sprayed by the firefighters to fight the fire and rainwater that has since entered the structure after the roof collapsed. “Because of the heat wave, this water is drying faster than we could expect,” says Karydis. Quick drying leads to the rapid crystallization of salts dissolved in water and trapped in the walls. As these salts crystallize, they expand, eroding mortar and stone walls and vaults. This unprecedented heat wave could accelerate this process causing the vaults to break before their temporary consolidation is complete. “

The Notre Dame de Paris restoration process was thrown into crisis by the decision of the Paris police chief Michel Cadot who on July 25 ordered the Regional Directorate for Cultural Affairs to stop all efforts on July 25 and not to proceed until when the soil had not been adequately decontaminated by lead.

“The 440 tons of lead that went up in smoke during the fire represent more than four times the annual emissions of lead into the atmosphere for the whole of France,” Annie Thébaud-Mony, researcher and spokesman for the Henri Pézerat Association told the journalists. 5 August. Despite the closure of Notre Dame de Paris, environmental groups and a union are urging officials to take extra precautions to protect the population in the immediate circumstances from potentially harmful lead debris.

Before the construction site was blocked by citizens and some parliamentarians, the trial was hasty as it did not take into consideration the contamination of the heavy metal. On Wednesday, however, the Minister of Culture pointed out that “urgency is linked to the persistent risk of collapse and justifies the pace of work undertaken”.

It was the New York Times last July 16 that revealed that the Paris cathedral had been left standing by a hair’s breadth. «As reconstructed by the American newspaper through interviews and documents, it appears that the situation has certainly degenerated due to an initial error in identifying the fire. The security officer at the sound of the alarm went to the sacristy while the fire instead lapped the wooden trunks under the vault, in the area called forest – reported the Open site – The inexperience of the man, who occupied that role only for three days after the fire broke out, it certainly contributed to the lack of timely action. The attendant was also performing a second round in a row: on duty from 7 am, he hadn’t been able to pull away even though it was now 18 o’clock due to the absence of his deputy ». A further complication arose from the alarm protocol found by NYT journalists in the archives of a library in the province of Paris and characterized by a network of diagrams and diagrams: the signal emitted was not simply “fire” but a cryptic message.

President Emmanuel Macron initially requested that the restoration of the cathedral be completed within five years, but his ambition may not come true due to delays in delivery and additional damage. “The first restoration works will not take place before the first half of 2020 – the ministry said in an official statement on Wednesday, adding that – they made workers’ health the top priority, above all of any other consideration”. But the recent collapses seem to show that there is also the urgency to avoid the collapse of the cathedral, a heritage of Christian culture and the history of humanity.