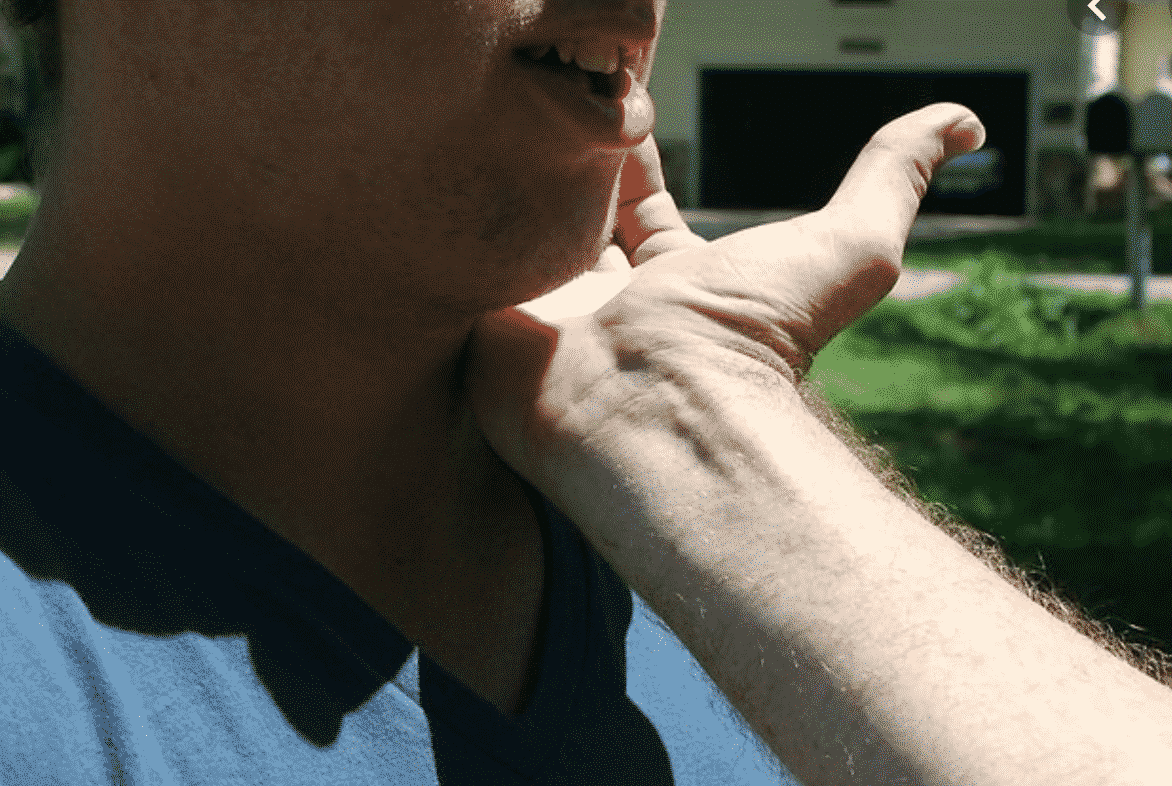 Editor’s note: The Daily Beast and Washington Post begin…Epstein died of a broken neck, not asphyxiation. Being trained at such things as I am, I can show you exactly how I use the palm of my right hand while putting my left hand behind the top of the head…standard training for many VT readers.

The problem here is whether to do it before sufficient strangulation to form petechial hemorrhaging and alter blood gasses enough (were the body found soon enough, which it was conveniently not) to fake suicide in a jail cell.  From BJ McEwen, the “go to” guy on jailhouse fake suicides:

Other terms used in medical forensic pathology include burking, garroting, throttling, chokehold, and carotid sleeper hold. Chest compression combined with smothering is called burking after the 19th-century criminal W. Burke, who killed victims in this manner.33 Garroting or throttling usually refers to ligature or manual strangulation, respectively,108 although garroting was initially a method of legal execution in Spain.66 A chokehold is a forearm or cylindrical object placed across the neck and pulled back with the other hand, causing airway compression and frequently laryngeal fractures, whereas with a carotid sleeper hold, the airway remains open while the carotid arteries are compressed.119

Despite the plethora of literature available, medical pathologists are frequently in a quandary regarding the diagnosis asphyxia-related deaths.42,78,103 Depending on the mechanism, individuals dying due to asphyxia may or may not have lesions, and to further complicate the matter, the lesions of asphyxia may resemble those arising from other causes.19,100,108 The 5 classic tenets of death due to asphyxia of cyanosis, fluidity of the blood, engorgement of the right ventricle, visceral congestion, and petechiae are now refuted and are often referred to as “the obsolescent quintet.”19,78,85,96,103,108 Veterinary pathologists know that cyanosis, fluidity of the blood, and visceral congestion are common postmortem findings and are not etiologically specific.

Of the 5 lesions, petechiae are the most compelling indicator of fatal neck compression,19,78,108their presence indicating impaired venous return from the head. Increased intravascular pressure due to compression of neck veins and concurrent arterial flow ruptures postcapillary venules,12,19,78,108 producing petechiae.96 If the arterial vascular supply and venous return are completely obstructed, petechiae will not occur as blood is prevented from entering the tissue. The development of petechiae in fatal neck compression depends on the duration, consistency, and intensity of the force applied to veins and arteries, and if present, a detailed examination of the neck is warranted. Petechiae may be visible in tissues and mucous membranes anterior to the area of neck compression: in the skin, conjunctiva, sclera, larynx, and oral mucosa.14,19,42,77,82,83,97 Mechanical or crushing trauma of the chest or abdomen causes marked congestion and petechiation cranial to the injury site.19 Petechiae, however, are not specific lesions of fatal neck compression because strenuous sneezing, coughing,19,46,108vasculopathies, and coagulation disorders can also cause petechiae.33 The disposition of the body, particularly if the animal was in an inverted position when found, is particularly important as congestion and petechiae can develop in dependent sites due to livor mortis.103,108Tardieu spots, a term used in the medical forensic pathology literature, specifically refers to subpleural petechiae103,108,127 but is often used to describe petechiae in soft tissues to infer asphyxial death.108,119 This eponymous term should be avoided in veterinary forensic pathology, and the distribution and location of petechiae should be described to avoid confusion and the implicit causal inference of this label.

Pulmonary edema with or without hemorrhage, atelectasis, and interstitial emphysema are common macroscopic and microscopic lesions in animal and human victims of strangulation and suffocation* but also occur with a myriad of other conditions. Proponents of semiquantitative morphologic analyses of histological sections claim that pulmonary lesions of strangulation, hanging, drowning, and suffocation can be distinguished in people32,52 but do not address the effect of decomposition on histological detail.94

Reflex cardiac arrest following neck trauma and stimulation of the carotid sinus is a presumptive mechanism of death currently debated by medical forensic pathologists, especially when anatomic lesions are absent.6,34,42,96,114,119 A meta-analysis of hanging deaths in people concluded that concurrent underlying conditions such as cardiac disease, sympathetic stimulation, and/or drug abuse are present in suspected cases of reflex cardiac arrest.114Similarly, bradycardia with subsequent cardiac asystole as a result of vagal stimulation in cases of hanging has been argued for over 120 years.23 In their review of the historical proposed mechanisms of death in hanging, Clement and coauthors23 remarked that those who supported the concept of vagal stimulation considered it only as a potential but unproven mechanism of death. In some textbooks of forensic pathology, vagal stimulation is considered a mechanism of death resulting from strangulation or from foreign body esophageal occlusion,35,108 but this is discounted by others because there is no supporting scientific proof.33,96

Daily Beast: While the New York City medical examiner waits for more information to determine Jeffrey Epstein’s cause of death, The Washington Post quotes two people familiar with the findings of the sex offender’s autopsy who say it revealed broken neck bones—not unheard of for suicide, experts warned.

Officials have said Epstein was found dead Saturday in a Manhattan jail cell of apparent suicide. The Post reported that people said Epstein’s hyoid bone was broken, which experts said is often found in homicidal strangulation, but can be fractured during suicide by hanging or strangulation in older people like the 66-year-old Epstein as the bone weakens. The medical examiner’s office told the Post:

“In all forensic investigations, all information must be synthesized to determine the cause and manner of death. Everything must be consistent; no single finding can be evaluated in a vacuum.”

While the results of Jeffrey Epstein’s post-mortem medical examination have yet to be officially announced, The Washington Post has cited unnamed sources as saying that an autopsy of US financier and accused sex trafficker has revealed that he had several broken bones in his neck.

The sources claimed that such injuries can happen either to people who hang themselves or those who are strangled.(What sources????)

Despite the fact that an autopsy has been performed, it has been unclear if the medical examiner has made a final determination into the cause of death, while an investigation into Epstein’s apparent suicide is underway.

This comes as US President Donald Trump told reporters earlier this week that he is “absolutely” demanding a full-fledged investigation into Epstein’s death.

US Attorney General William Barr, for his part, underscored that “any co-conspirators should not rest easy” and that he was “appalled and […] frankly angry to learn of the MCC [Metropolitan Correctional Centre]’s failure to adequately secure this prisoner”.

“We are now learning of serious irregularities at this facility that are deeply concerning and demand a thorough investigation,” Barr pointed out.

Barr was echoed by New York Mayor Bill de Blasio, who said that Epstein’s death “boggles the imagination”, suggesting that “this series of events is way too convenient”.

Speaking to the news network NY1, he argued that all those involved could say that they were watching Epstein “like a hawk” and that they were going to “take every measure to make sure nothing happens to him or he doesn’t do anything to himself”.

In a separate development this week, at least two computer desktops and an Apple computer were packaged and marked for transport during an FBI raid of 70-acre Little St. James Island, owned by Epstein.

Taking part in Monday’s raid were officials from the New York Police Department (NYPD), who are members of the FBI New York Child Exploitation and Human Trafficking Task Force.

Meanwhile, investigators are looking into a scenario which suggests that the two guards tasked with watching Epstein may have been sleeping when he apparently committed suicide in his cell.(Total Bullshit)

The guards are suspected of falsifying log entries to show that they were checking Epstein in his cell every 30 minutes. In this regard, investigators do not rule out that Epstein died one to two hours before his body was found.

The 66-year-old was on a suicide watch after his earlier suicide attempt in July, but attorneys pushed for him to be taken off the watchlist shortly before his death on 10 August at the MCC cell where he was awaiting trial on charges of running a sex trafficking ring involving minors.(Let us see the documents…and their rationale considering we can now prove their client said there was a murder attempt)