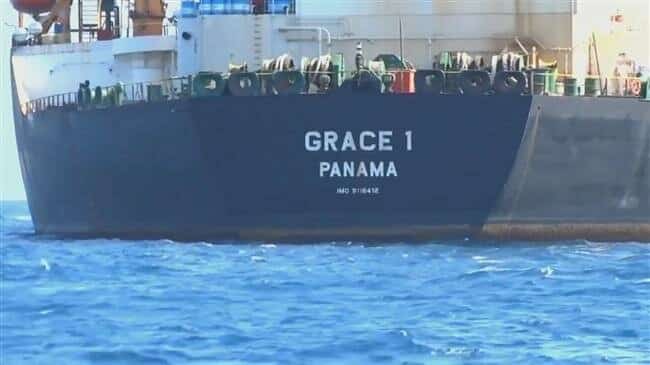 Update: 08-16: 2200 time: Now we have the ship was going to be released but “it needs parts.” Why these parts were not taken care of before now is a puzzle. Maybe the crew had no access or the contractors to install them did not.

This have given the US time to file a claim for the ship, where one has to ask that is this being pulled out now rather than weeks ago? Was Britain supposed to screen for the US and then changed its mind?

Anyway, the Gibraltar Supreme Court say it will rule on anything the US presents. We will see how tough it is. They will be remembered already for their professionalism…JD.

Update: The US has quickly filed a claim that it wants Gibraltar to release the tanker to it. So we might have a case where quick reporting of the imminent release gave the US time to quickly tank it. Notice the mention below where the judge said they were proceeding with the release as no protest had been submitted by the US …JD.

[ Editor’s Note: Well, this was a surprise move. One would have thought that the US could be able to put the squeeze on little Gibraltar. Britain had already gone quiet on the issue, due seemingly to having bigger concerns of dealing with its current political upheavals.

The ticket out of jail seemed to be Iran’s signing that their ship would have no destination to a country under sanctions by the EU. With the ship and a million barrels of oil in it, that was not a hard issue to concede on.

Britain looks like a chump for even getting involved like this — some would say the death throes of an old colonial power trying to pretend it is a world power, when it can’t even afford to maintain its navy in sailing condition.

You really can’t make this stuff up, despite all those who try… Jim W. Dean ]

Gibraltar’s government has released an Iranian-operated supertanker, which was seized by British marines in the Strait of Gibraltar on July 4, despite pressure from the United States for the vessel’s continued detainment.

“Authorities in Gibraltar have released the Iranian supertanker Grace 1, which was seized on July 4 on suspicion it was shipping 2.1 million barrels of crude oil to Syria in breach of EU sanctions,” Reuters quoted the Gibraltar Chronicle as reporting on Thursday.

According to the report, the chief justice of Gibraltar’s supreme court, Anthony Dudley, said there was no US application currently before the court.

Chief Justice Anthony Dudley said that since Iran had guaranteed in writing that the destination of the Grace 1 would not be a country “subject to European Union sanctions… there are no longer reasonable grounds to suspect that the detention of the Vessel is required.”

Spain’s Foreign Ministry reported after the incident that the UK had seized the vessel at the request of the US, which has been trying to trouble Iran’s international oil vessels as part of its campaign of economic pressure against the Islamic Republic.

Earlier on Thursday, Gibraltar said that the US had applied to seize the Iranian-operated oil tanker after British media reported that the vessel’s release was imminent following a set of diplomatic exchanges between Tehran and London.

“The US Department of Justice has applied to seize the Grace 1 on a number of allegations which are now being considered,” the Gibraltar government said in a statement.

It added that the “matter will return to the Supreme Court of Gibraltar at 4 p.m. (1400 GMT) today.”

A diplomatic dispute broke out between Iran and the UK on July 4, when Britain’s naval forces unlawfully seized Grace 1 and its cargo of 2.1 million barrels of oil in the Strait of Gibraltar under the pretext that the supertanker had been suspected of carrying crude to Syria in violation of the European Union’s unilateral sanctions against the Arab country.

However, reports show the confiscation took place upon a call by the US. Tehran rejected London’s claim that the tanker was heading to Syria, slamming the seizure as “maritime piracy.”

Iran’s Ports and Maritime Organization said Tuesday that Britain was expected to soon free Grace 1, after the two sides exchanged certain documents to pave the way for the supertanker’s release.

Soon after the report emerged about the release of the Iranian-operated tanker, Iran’s Foreign Minister Mohammad Javad Zarif took to Twitter noting that the seizure of the tanker proved the Trump administration’s contempt for the law.

Zarif added that the US effort to prevent release of the Iranian tanker was aimed at abusing “the legal system to steal our property on the high seas.” He said this vain attempt followed the US failure in achieving its anti-Iranian goals through economic terrorism.

“Up to the last minute, the United States tried in vain to prevent the release of the tanker, but was faced with a humiliating defeat,” Iran’s UK envoy added.

Baeidinejad stated that all preliminary steps have been taken to ensure the tanker’s movement toward free waters and “the vessel will soon leave the Gibraltar region.”

Hear a Real COVID Expert: A War Against Coronavirus and Stupidity