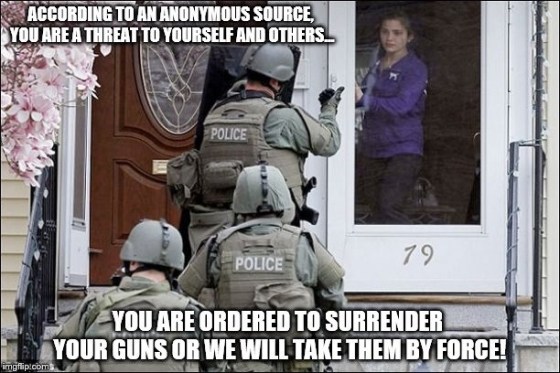 Red Flag Laws in the Age of Political Psychiatry

Psychologists and psychiatrists tend to be overwhelmingly people of the Left. The Diagnostic and Statistical Manual of Mental Disorders changes every few years, removing old diagnoses like homosexuality and gender dysphoria, mostly because of political pressure from interest groups. A move is afoot to add conspiracy thinking to the manual. While conspiracy thinking can be an intellectual dead end, sometimes “they” really are out to get you. Ask Carter Page. It should be obvious how changing and amorphous diagnoses will be used against those on the right.

ROBERT STEELE: Red Flag laws do NOT provide for due process.  The person being disarmed is not notified in advance and is not given an opportunity to challenge the accusation or their accuser.  This is a star chambers matter in which an idiot judge issues a summary judgement without ever looking at the person being accused, and a SWAT team then attacks  the person and either disarms them, or kills them, as occurred recently in Maryland. I support President Trump, in principle, but he is doing nothing to defend the US Constitution and he is particularly derelict in defending the 1st Amendment (BigTech Zionist censorship and digital assassination run amok); the 2nd Amendment (allowing false flag propaganda narratives and contemplating red flag laws instead of encouraging open carry across the land); and the 4th Amendment (allowing TSA to spread to public spaces, he might as well order all Americans to walk naked in the streets).  We have a problem. There is a solution to  that problem: #UNRIG.